Chinese researchers have created the world’s first cloned Arctic wolf — an achievement that could help save other species from extinction and ensure the biodiversity of our planet.

Why it matters: Scottish scientists proved back in 1996 that it was possible to clone a mammal using a cell from an adult animal. Possible — but not easy. Dolly the sheep was the only successful clone in their 277 attempts.

Cloning is still a challenging process — fewer than 25 animal species have been cloned to date, so the first successful cloning of a species is still newsworthy 25+ years after Dolly’s birth.

In July 2022, a beagle surrogate gave birth to a healthy cloned Arctic wolf.

Maya 2.0: The journey to creating the first cloned Arctic wolf began in 2020, when researchers at Sinogene Biotechnology, a Beijing-based biotech, teamed up with the polar theme park Harbin Polarland.

In July 2022, one of those beagles gave birth to a healthy cloned Arctic wolf, also named Maya.

“After two years of painstaking efforts, the arctic wolf was cloned successfully,” Mi Jidong, Sinogene’s general manager, said at a press conference in Beijing. “It is the first case of its kind in the world.”

As of September 19, Maya was 100 days old and in good health. She’s currently living with her surrogate mother at a Sinogene lab and will eventually move to Harbin Polarland, where she might have to live for the duration of her life, due to a lack of early socialization with other wolves.

“The newly born wolf has the same genome as the original wolf, but the cloned wolf hasn’t lived with other wolves, but with a dog,” said Zhao Jianping, Sinogene’s deputy general manager.

Looking ahead: The arctic wolf isn’t an endangered species, mainly because it inhabits a remote region far away from humans. (However, climate change is making it harder for the species to find food, which could put it at risk in the future.)

But the knowledge gained from the creation of Maya could help researchers create healthy clones of other mammals that are endangered — or even already extinct. Other teams are currently working to resurrect both the extinct Tasmanian tiger and — more ambitiously — the woolly mammoth.

“It is relatively easier to clone canines and cats,” said Zhao. “We’ll continue to work in this field. In the next step, we may clone rare wild animals other than canines or cats… and it will be more difficult.”

The big picture: New species emerge while others go extinct all the time on Earth, but if a lot of species go extinct in a relatively short period of geologic time, we call that a “mass extinction event.”

Experts have identified five mass extinction events throughout Earth’s history, and many believe human activity has us currently in the midst of a sixth, with species going extinct at a rate a thousand times faster than normal for our planet.

Ensuring that Earth remains a richly biodiverse planet is key to the survival of our own species, and the birth of the first cloned Arctic wolf may bring us a step closer to being able to prevent or even reverse the extinction of other species in the future. 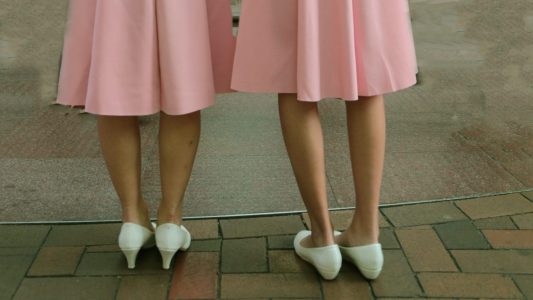 After being separated as toddlers, two identical twins were raised apart in the US and South Korea.

Genetics
Identical twins were raised in different countries. Here’s how they differ today.
Subscribe to Freethink for more great stories
Subscription Center
Sections
Video
Freethink
Subscribe
We focus on solutions: the smartest people, the biggest ideas, and the most ground breaking technology shaping our future.
Subscribe