Using CRISPR gene-editing technology, African scientists have created a banana that’s resistant to a disease that’s caused billions of dollars in economic losses over the past decade, ravaging farms across Africa.

Their disease-resistant banana is indistinguishable from unmodified plants, except for its unique ability to fight off infection.

The challenge: Banana xanthomonas wilt (BXW) is a bacterial disease that spreads easily and kills any banana plant it infects — farmers’ only recourse once an infection takes hold is to cut down and burn the entire plant.

Every species of cultivated banana is susceptible to BXW, and in places where the fruit is a primary source of both income and food, such as Africa, an infection can threaten not only farmers’ livelihoods but the entire local economy.

The study: In an attempt to stop the devastation caused by BXW, International Institute of Tropical Agriculture (IITA) scientists in Kenya set out to develop a disease-resistant banana.

For their study, they focused on a gene called downy mildew resistance 6 (DMR6) — during a pathogen infection, the expression of this gene increases, and that suppresses the plant’s immune function.

Types of barley with mutations in DMR6 have been shown to be more resistant to pathogens, so the researchers wanted to use CRISPR to reduce the expression of DMR6 in a banana plant.

The results: The disease-resistant banana plants looked just like unmodified ones and grew just as readily. However, several showed no symptoms of BXW after exposure to the bacteria behind it.

“We have proof of concept that knocking down MusaDMR6 in banana showed enhanced resistance to a critical disease, BXW, and did not show any detrimental effect on plant growth,” senior author Leena Tripathi told the Cornell Alliance for Science.

Next steps: The modified banana plants weren’t completely immune to BXW — some did succumb to the disease. They were also grown in a greenhouse setting, so further tests are needed to see if they grow as readily in the wild, according to Tripathi.

If the disease-resistant banana plants can prove themselves under real-world conditions, though, they could help banana farmers overcome one of the biggest challenges they face — and potentially others, too.

Bananas are notoriously susceptible to disease because they are all clones. In the past, varieties of banana have been driven virtually extinct by infections like Panama Disease, and today, viruses, bacteria, and fungi again threaten the world’s banana supply.

But if CRISPR can help bananas survive BXW, it may offer a solution to the plant’s other enemies, too. 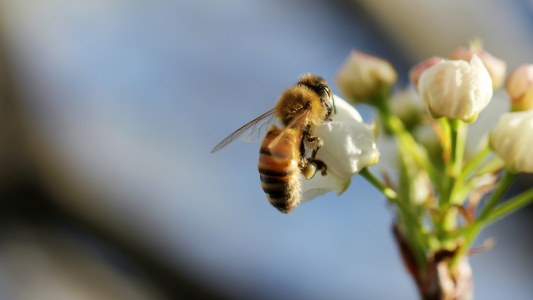 Beehives are under threat from common insecticides. But researchers created pollen-like microparticles to deliver an antidote.