Will humans still eat once-living animals in 2020? How about 2040? Or 2100? The further into the future I try to imagine humans eating animals, the less likely it seems. And I say this as someone who loves all the meats.

Humans will always need protein. In the U.S., we like to get our protein from animals; commercial operations here processed more than 28 million pounds of red meat and 27 million pounds of poultry in the first six months of 2016, according to the USDA. And the Organization for Economic Cooperation and Development projects global demand for animal meat to increase dramatically over the next 10 years.

But you know what? As much as I love eating animals, I’d forego their flesh entirely if someone came up with an alternative that tasted, say, 75% as good. Deep down, I just want something with protein that tastes good. I don’t really care whether it comes from a dead animal, it’s just that dead animals taste really good.

Thanks to stem cell research and improved plant-based science, that tipping point is coming.

Can plant-based alternatives trick our palates?

While Tofurky may be acceptable to vegetarians and vegans, most soy-based products won’t inspire a carnivore to switch sides. Beyond Meat and Impossible Foods think they can win that game with better science and non-soy ingredients. Both companies are Silicon Valley darlings, and both have developed a plant-based burger that looks like meat. Both are even selling the burgers on a very small scale.

You can find the Impossible Foods burger at Momofuku in New York (and only there), where Chef David Chang is figuring out enticing ways to prepare the company’s signature “meat” patty. The renowned chef appears to really like what he’s tasted.

So what makes the Impossible Foods burger so meat-like? The company says its secret ingredient is a molecule called heme, which is found in animal and human blood, as well as plants like soy. But instead of extracting heme from soy, Impossible Foods opted instead to copy the soy heme gene and combine it with yeast, which allows them to make vats of the magical ingredient that lends Impossible burgers their color and flavor. (The rest of the burger comes from potato, coconut oil, and wheat.)

That burger looks amazing, but I’m not going to Momofuku for it. Luckily, Beyond Meat makes something similarly juicy (albeit with pea protein and beet juice) called the Beyond Burger, and you can buy it at select Whole Foods, one of which is just outside D.C. After psyching myself up by reading favorable reviews, I hopped on the Metro and headed to a participating Whole Foods in Maryland, where I learned the burger was sold out.

Dying to eat a giant hunk of fake meat, I got Beyond’s frozen Beast Burger instead. Here it is next to a frozen vegan patty from Trader Joe’s (Beast Burger on the right, obviously): 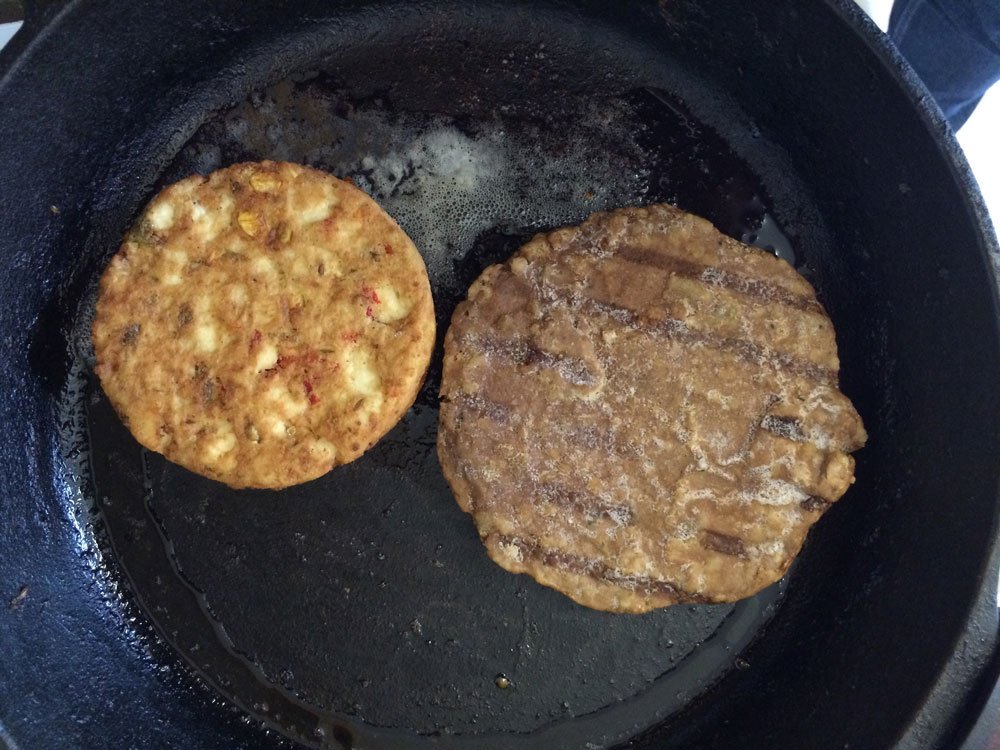 After six minutes per side in a cast iron pan, it looks like this: 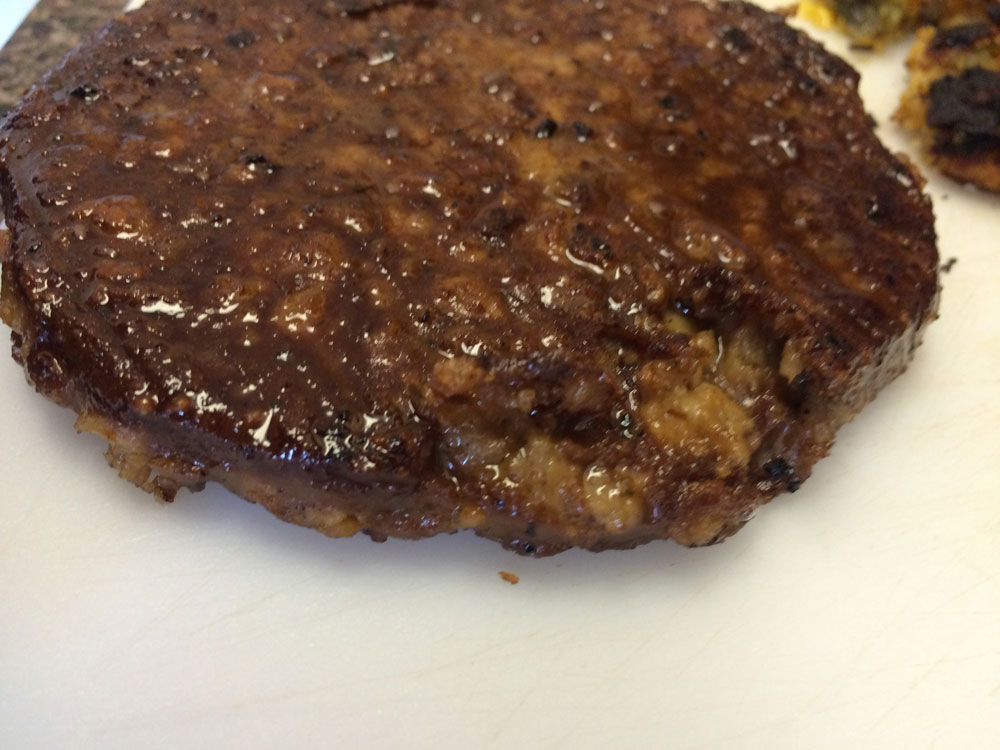 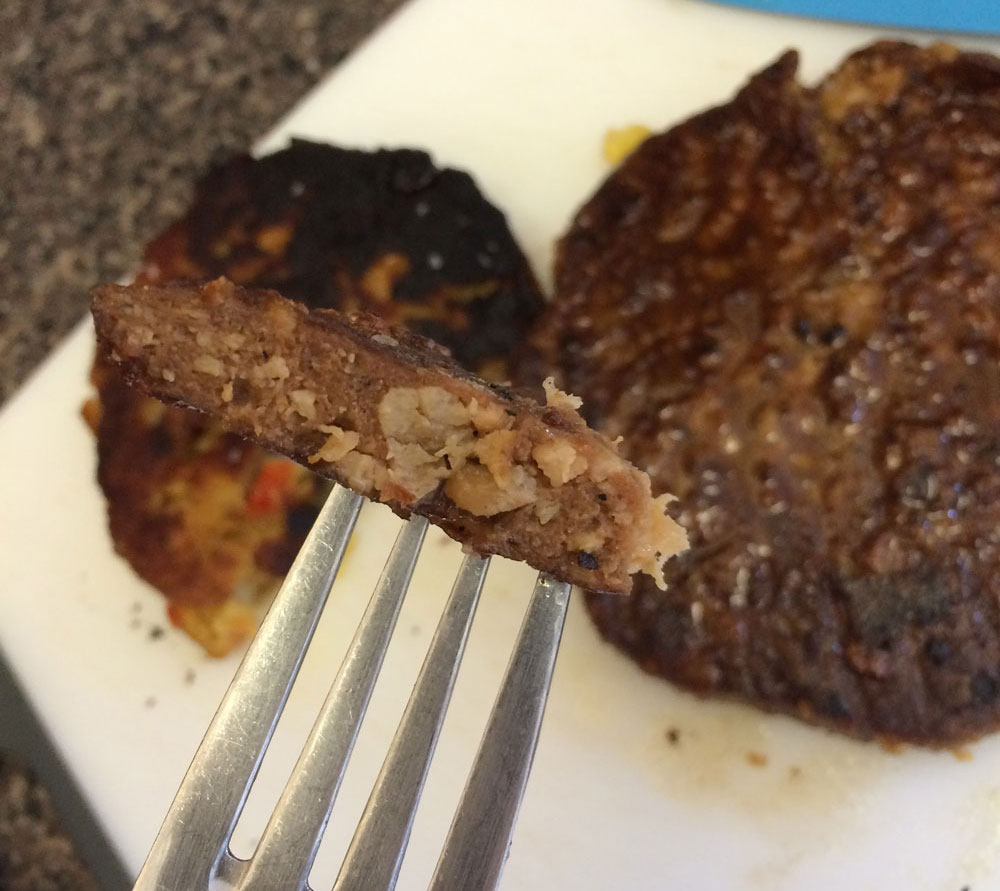 Slightly less burger-like. And you know what? It’s pretty good! No one would confuse it for a hamburger made from cow meat, but at this point, that might be asking for too much. These are, after all, plant-based. And by my own admission, I’m not looking for a perfect substitute, just an enjoyable one.

It also had a great macronutrient profile: 16 grams of fat, 7 grams of carbs, 23 grams of protein. With the exception of the carbs (four of which were fiber), that’s about the same macro breakdown for an 80-percent lean beef patty. And seeing as pea protein is just as useful to the body as whey protein, Beyond Meat products are a useful substitute on multiple fronts.

To compete with real meat, we’ll need not one alternative, but an assortment of them. The wildest one is meat grown in a lab using the stem cells of living cows combined with a serum derived from cow fetuses.

A team of researchers at the University of Maastricht first unveiled “cultured meat” in 2013. Reviewers say it tastes pretty dang close to meat. The U.M. team has been working to refine their methods in the years since, and hope to have a product line by the 2020s.

But for that to happen, they’ll need to reduce the cost. The burger U.M. researchers unveiled in 2013 was worth $330,000; lamb meatballs made by the same process earlier this year cost $18,000 a pound. Consumers won’t be able to afford lab meat any time soon. And whether they’ll want to eat it is another question entirely. 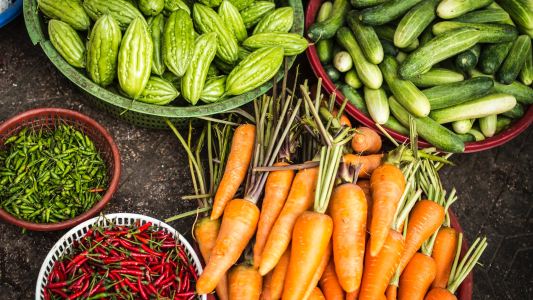 Food
Could ugly produce change the world?1:37
Subscribe to Freethink for more great stories
Subscription Center
Challenges
Video
Freethink
Subscribe
We focus on solutions: the smartest people, the biggest ideas, and the most ground breaking technology shaping our future.
Subscribe