For roughly two decades in the middle of the last century, Americans believed it was only a matter of time until nuclear power ruled everything around them.

World War II was over and global leaders in government and industry believed the nuclear power that ended it could be harnessed domestically to lower energy costs and increase productivity. Some of the ideas hatched during this period are still with us today (see: irradiated food). But other ideas were so grand they existed only on paper. 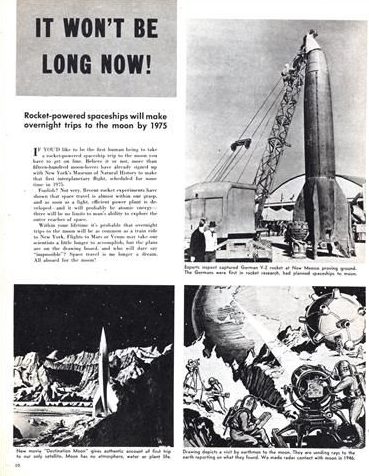 A 1951 article in Picture Show magazine anticipated a vibrant space tourism industry 10 years before Yuri Gagarin became the first person to orbit the planet, and 18 years before Apollo 11 landed on the moon. And because nuclear was all the rage in 1951, the magazine speculated that any space-bound rocket would probably be propelled by “atomic energy.” The magazine was half-right: In 1957, American nuclear physicist Ted Taylor, an alumnus of the Los Alamos National Laboratory, launched Project Orion while working at General Atomics. Taylor’s idea: Use a series of nuclear bomb detonations as thrust to power a rocket into space.

Taylor and his team believed that nuclear power, not “chemical propulsion”–i.e., conventional rockets–were the trick to get getting humans into deep space. As detailed in 1995 by Michael Flora, Orion “would have been more akin to the rocket ships of science fiction than to the cramped capsules of (Soviet Cosmonaut Yuri) Gagarin and (American Astronaut John) Glenn. One hundred and fifty people could have lived aboard in relative comfort; the useful payload would have been measured in thousands of tons. Orion would have been built like a battleship, with no need for the excruciating weight-saving measures adopted by chemically-propelled spacecraft.”

Why didn’t it happen? Questions about its usefulness as a weapon (which Taylor opposed) and fears about nuclear fallout from its rocket turned Orion into a hot potato that was passed from one U.S. government agency to another, with no one all that interested in funding it. The signing of the Nuclear Test Ban Treaty in 1963 made a nuclear propulsion system–and Orion–essentially impossible.

The 1958 Ford Nucleon looked a lot like the Mystere, a winged concept car Ford unveiled in 1955. The biggest difference? The Nucleon would run on nuclear power, as opposed to gas, and would travel 5,000 miles before needing to be charged. All it needed was a nuclear reactor that was small enough to fit in the trunk of a car without killing the vehicle’s occupants.

Why didn’t it happen? Ford never built a working prototype, possibly because they would’ve needed to build a nuclear reactor that could safely fit in the trunk of a car. It was an awesome idea, and one car manufacturers continue to embrace in spirit, though not specifics, with high-tech, never-to-be-built, one-off concept cars.

No Atomic Age project (aside from, you know, actual nuclear reactors) came as close to realization as those developed by the Aircraft Nuclear Propulsion program. Headed by GE and funded by the U.S. government, the program sought to apply nuclear propulsion to everything from planes to helicopters using small nuclear reactors.

Why didn’t it work? “American engineers figured out how to fit a reactor in an airplane and make it generate thrust without frying the crew,” according to the National Interest ’s Steve Weintz, but “American leaders couldn’t figure out how to pay for it or why they needed it.” As with Project Orion, the ANP program failed the cost-benefit analysis and was shuttered in 1961,  just as engineers were preparing to launch a test flight program.

Imaginative uses for atomic energy weren’t limited to propulsion. In 1950, Dr. William L. Davidson of B.F. Goodrich (the tire company) unveiled a golf ball that couldn’t get lost. Embedded with 1/50th of a gram of “radioactive materials,” Davidson’s balls could be found in the deepest weeds with the use of a Geiger counter and headphones. The only problem? Golfers had to be within a few feet of their lost balls, and they needed to purchase (and lug around) a $25 Geiger counter; which, the Chicago Tribune then noted, would buy you about 25 golf balls.

Why didn’t it work? It kind of did, actually. While Davidson’s balls never made it to market — why hunt around with an expensive Geiger counter when you could simply drop a new ball while no one was looking? — his idea lived on. In 1990, the Seattle Times reported on a nuclear research center in Manitoba that irradiated golf balls for increased range. 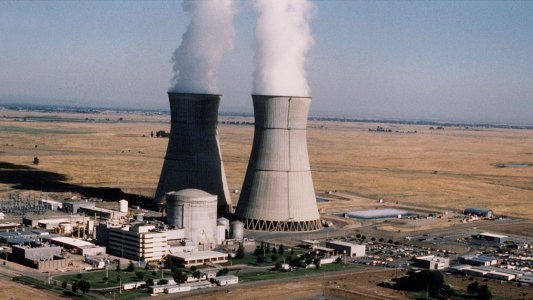 Many think of Chernobyl and Three Mile Island when they hear nuclear power. But nuclear’s struggle to gain a…

Sustainability
Three reasons we don't have more nuclear power in the US
Subscribe to Freethink for more great stories
Subscription Center
Sections
Video
Freethink
Subscribe
We focus on solutions: the smartest people, the biggest ideas, and the most ground breaking technology shaping our future.
Subscribe