Today, GMO crops are common in the U.S. — grocery stores sell modified corn, sugar, apples, and more — but there’s only one FDA-approved GMO food that isn’t grown, but born: a species of salmon designed to grow more quickly.

To get FDA approval for a GMO food, scientists must complete a series of safety studies, similar to what they would need to do to receive approval for a new drug. This can be time-consuming and costly — but researchers are ready to put in the effort for Cosmo.

While Cosmo looks like your standard bull calf, he’s unlike any other in the world: UC Davis scientists have inserted a gene that makes him more likely to produce male offspring.

Cattle with this trait could be a major boon for beef production, as males weigh more and require less feed, so if Cosmo’s creators can convince the FDA that the beef is safe, they could become just the second animal to receive approval as a GMO food — a move that could transform the cattle industry.

It took two and a half years of development, but the UC Davis team found a way to use CRISPR to insert an extra copy of the cattle SRY gene, which initiates male development, into a bovine embryo.

According to a press release, it then took another two years for the group to successfully impregnate a cow with one of the modified embryos, but in April 2020, Cosmo was born.

The likelihood of Cosmo’s offspring being male is 75% — not the usual 50%.

The researchers believe the extra SRY gene will increase the likelihood of Cosmo’s offspring being male — instead of having a 50% shot, they think it’ll be 75%.

Because it’s just a single gene for masculine traits, not the entire Y chromosome, the extra 25% of Cosmo’s bull offspring would still be genetically female, with two X chromosomes, and wouldn’t produce sperm. But they would have male sex organs and male characteristics.

“We anticipate Cosmo’s offspring that inherit this SRY gene will grow and look like males, regardless of whether they inherit a Y chromosome,” researcher Alison Van Eenennaam said.

Cosmo won’t be mature enough to produce any offspring until the summer of 2021, but once he does, the researchers will have a chance to see if the SRY gene insertion worked as hoped.

If so, they’ll then have to conduct the necessary research to secure FDA approval for a new GMO food — again, only one other species has received such approval, and it came 20 years after its developers submitted their application.

Because males are better at converting food into weight, they wouldn’t need to use as much feed to produce the same amount of meat.

Males are also larger overall, so ranchers could even raise fewer cattle without cutting into their bottom line. That, in turn, could potentially cut down on the animals’ negative environmental impact.

It is currently possible to produce male offspring by collecting sperm, separating out the slightly heavier sperm cells with Y chromosomes from the others, and then using those to artificially inseminate cows.

But as Van Eenennaam told Wired in 2018, letting genetically engineered bulls impregnate cows the old fashioned way would be less complicated and cheaper — if the team can get approval from regulators. 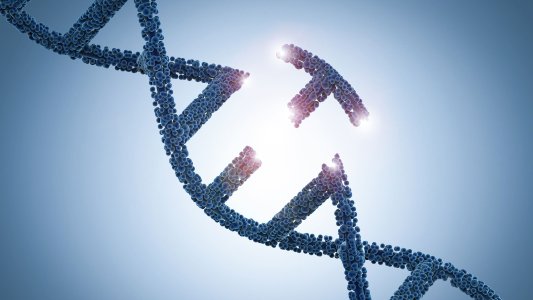 A new protein opens doors for gene editing by gaining access to hard-to-reach areas of the genome.