A sleep technique used by Thomas Edison, Salvador Dalí, and Albert Einstein to boost creative thinking actually seems to work, according to a new study — and you can harness its power in less than a minute.

The hypnagogic state: Going to sleep isn’t like flipping a light switch where you’re awake one moment and snoozing the next — between the experiences is a roughly two-minute-long transition period known as the “hypnagogic state.”

During the hypnagogic state, your muscles relax, and while you’re still aware of what’s going on in the room around you, you might also start to imagine sounds or visions.

Sleep on it: Several of the most remarkable minds in history are reported to have tapped into the hypnagogic state to boost their creative thinking.

Edison would (allegedly) hold a steel ball in his hand while reclining for a siesta, so that when his muscles relaxed, the ball would hit the ground and make a noise that woke him back up — ideally, with a new idea on how to move forward with an invention.

“The sleep phase has been relatively neglected by cognitive neuroscience until now.”

Dalí did the same thing to get ideas for his artwork — the difference was he held a spoon.

New research at the Paris Brain Institute not only suggests that the hypnagogic state can boost creative thinking, but also reveals what’s happening inside the brain during it.

Eureka! More than 100 people who are capable of falling asleep fairly easily were enrolled in the study. Each was given a series of math problems to solve, as well as a tedious step-by-step method for finding the correct answer.

However, there is a better method, not shared with the subjects, that would solve each problem much faster, and 16 of the volunteers caught on to this alternative pretty quickly.

People that didn’t figure it out after 60 problems were given 20 minutes to rest in a chair with their eyes closed while holding a plastic cup in their hand. If a volunteer dropped the plastic cup, they were asked to immediately say out loud anything that was going on in their minds before it fell.

During this break, the researchers used EEG helmets to record participants’ brain activity — this allowed them to see if a volunteer transitioned from the hypnagogic state into the next, deeper level of sleep.

After their naps, the volunteers went back to solving the math problems — and spending time in the hypnagogic state without falling deeper asleep did appear to help them find the shortcut.

“Spending at least 15 seconds in this very first [hypnagogic] phase of sleep after falling asleep tripled the chances of finding this hidden rule, through the famous ‘Eureka!’” first author Célia Lacaux said. “This effect disappeared if the subjects went deeper into sleep.”

The cold water: This moment of clarity didn’t happen right away — volunteers needed an average of 94 trials to figure out the alternate method after their naps.

Additionally, while the thoughts running through volunteers’ minds right before they dropped the plastic cup were weird and interesting — horses in hospitals, numbers dancing, etc. — the researchers couldn’t find any connection between their content and a person’s creativity following a nap.

“It doesn’t mean that these experiences play no role, though,” author Delphine Oudiette told Live Science. “Further studies are needed on this point.”

Those studies may need to be structured a bit differently, too, to make firmer conclusions about cause and effect. Since people were not randomly woken up, those subjects who fell into deeper sleep might be different than those who woke up right away.

The big picture: The researchers discovered a specific pattern of alpha and delta waves in the brains of volunteers during the hypnagogic state that could be useful for research into creative thinking, which is still largely a mystery to neuroscientists.

“The sleep phase has been relatively neglected by cognitive neuroscience until now,” Oudiette said in a press release. “This discovery opens up an extraordinary new field for future studies, especially of the brain mechanisms of creativity.” 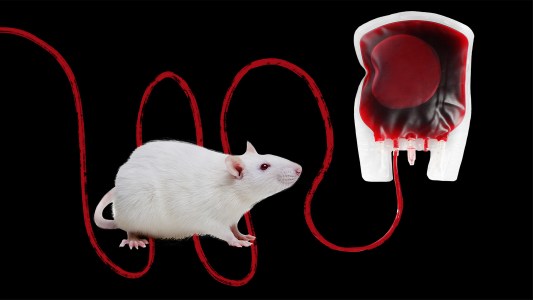 Young blood transfusions may combat signs of aging in older mice by increasing the production of a specific protein: Klotho.