Researchers at Stanford and Singapore’s Nanyang Technological University (NTU) have developed a technique for controlling neurons from a distance, without invasive implants.

By injecting a molecule called TRPV1 — which helps us sense the heat in capsaicin chili peppers — into the brains of mice, they could control specific brain cells from up to one meter (about three feet) using infrared light beams.

The ability to impact neurons, without invasive surgical methods or tethers sticking out of skulls, could help researchers study the brain during more normal behavior, like mice socializing together.

“Like us, mice are a social species, but studying an animal’s natural behavior within a social group is challenging with a head-mounted fiber-optic tether,” Guosong Hong, assistant professor of materials science and engineering at Stanford, said in a statement.

But using this new tech could allow researchers to let the mice be mice, while infrared waves beam over them — and reveal information about their brain at the same time.

Flipping switches: Activating and deactivating neurons is a tried-and-true technique for neuroscientists looking to better understand the brain.

If you think of the brain like an extremely complex electrical switch board, fiddling with the nodes could be a valuable window into the goings-on. But the brain doesn’t exactly come with a circuit map, and controlling these neurons is not an easy task.

In optogenetics, researchers use light-sensitive proteins from algae inserted into genetically engineered neurons to control them using light. While the tool has proved useful, it has some drawbacks, Hong says.

Because bodies are opaque, getting the visible light to the neurons you want to hit often means invasive implants or tethers mounted to the skull.

Not only can these potentially damage tissues, but they make it impossible to study the brains while doing normal behaviors — or as normal as they could be in a lab.

But while visible light may not be able to make it through scalp, skull, and brain, infrared light can.

Activating and deactivating neurons is a tried-and-true technique for neuroscientists looking to better understand the brain.

Feeling the heat: While the infrared light beams can make it to the brain cells, current optogenetic techniques don’t respond to its wavelength.

To get around this, Hong and colleagues focused on infrared’s other signature: heat.

Luckily, there’s a heat-detecting molecule that was perfect for the occasion. TRPV1, the capsaicin receptor, has already been used to give mice the ability to see in infrared, and it’s similar to the protein that pit vipers use to seek out warm prey in the black of night.

“It turns out that rattlesnakes have a much more sensitive way of detecting infrared signals than we could manage in the mouse brain,” Hong said. “Fortunately, we had materials science to help us.”

The team used nanoparticles called MINDS to help absorb the infrared light and make it stronger. Created from the same materials in solar panels and LEDs, the MINDS were injected into the brain, where they amplified the infrared signals.

Remote control brains: With both the TRPV1 channels and MINDS on one side of the mouse motor cortex — the part of the brain that controls motion — they could cause mice who had been exploring their enclosures randomly to walk around in circles using the infrared beam, like a rowboat with one paddle.

“That was a great moment when we knew this was going to work,” Hong said. “Of course it was only the beginning of validating and testing what this technology could do, but from that point on I was confident we had something.”

The team were also able to control brain cells throughout the entire depth of the mouse brain. Using the technique on dopamine neurons, the mice became “addicted” to the infrared beam — even though they couldn’t see it — spending almost all of their time beneath it.

Hong believes the TRPV1 and MINDS technique can be used right away to study animal brains during natural behavior. In the meantime, the team is working to streamline their new method, aiming to make it a one-step process. 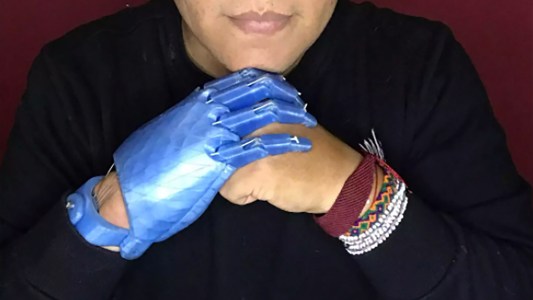 After creating a bionic hand for himself, Peruvian engineer Enzo Romero launched a company to sell the low-cost prosthetics to others.

Bionics
Man builds his own bionic hand out of melted plastic bottles
By Kristin Houser
Subscribe to Freethink for more great stories
Subscription Center
Sections
Video
Freethink
Subscribe
We focus on solutions: the smartest people, the biggest ideas, and the most ground breaking technology shaping our future.
Subscribe