After creating a bionic hand for himself out of melted plastic bottles, Peruvian engineer Enzo Romero began making 3D-printed prosthetics for others — and they cost thousands of dollars less than traditional prosthetics.

The challenge: A bionic hand, with fingers that open or close in response to movement or electrical signals from a person’s residual limb, can dramatically improve life for someone who has lost a hand.

Bionic limbs often cost tens of thousands of dollars, though, and of the estimated 3 million people worldwide living without a hand or arm, 2.4 million live in developing countries, where the high cost can be prohibitive.

The engineer: Romero, who was born with one hand, started wondering if he could build a bionic hand for himself after seeing the character Luke Skywalker get a prosthetic in the Star Wars film “The Empire Strikes Back.”

That inspired him to leave his home in Cusco and move to Lima to study mechatronic engineering, he told Insider.

During his studies, Romero developed a process for creating a 3D-printing filament out of melted plastic beverage bottles. This helped save money when he eventually printed a bright blue bionic hand for himself.

Romero is now the founder of LAT Bionics, a company that creates custom prosthetics for people in Peru, where 12,600 people are living with upper limb amputations and the minimum wage is less than $300 per month.

The startup: LAT Bionics’ least expensive model contains just one motor and costs $800, while the most expensive one costs $2,500 — it’s controlled by an electromyographic sensor that picks up on tiny muscle movements in the wearer’s limb.

So far, the company has fitted about 20 Peruvians with bionic hands. According to Romero, many of these people lost their hands in work accidents and are paying for their new hands in installments.

Each bionic hand is created using 3D scans of the user’s residual limb. The company’s custom software then uses those scans to create the digital files for a 3D printer. After the pieces of the bionic hand are printed, the LAT Bionics team assembles it.

Romero told the Cambridge Center for Social Innovation that this can all be completed in just one week, while the traditional process for creating a bespoke prosthetic can take two to three months.

Looking ahead: Romero was recently accepted into the TED Fellows Program, which should help him spread the word about his company and connect with people who could help it grow.

In the meantime, he plans to continue developing his bionic hand in the hope of helping more people in Peru before expanding to Ecuador and Bolivia, where many people with amputations face the same financial barriers to prosthetics.

Wearables
New VR body suit lets you see inside your body while you exercise
A system for monitoring motion and muscle engagement could aid the elderly and athletes during physical rehabilitation.
Up Next 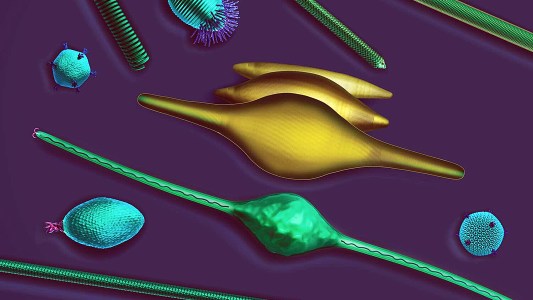 The secret to a shapeshifting volcano virus may help us create new, better drug and vaccine delivery platforms.

Virology
A shapeshifting volcano virus’s secret has been discovered
Subscribe to Freethink for more great stories
Subscription Center
Sections
Video
Freethink
Subscribe
We focus on solutions: the smartest people, the biggest ideas, and the most ground breaking technology shaping our future.
Subscribe