Unlimited Tomorrow — a company making robotic limbs that can be controlled with the user’s mind — is now accepting requests for a custom, 3D-printed prosthetic arm. Amputees can get fitted for the arm entirely online.

Functional prosthetic arms are expensive, averaging between $20,000 and $100,000. And getting fitted for one entails working with a prosthetist, which adds to the cost in time and money. But Easton LaChappelle, CEO of Unlimited Tomorrow, wants to change that with his newest arm: TrueLimb.

LaChappelle, age 24, started a decade ago, when he was just 14. That’s when he developed and created his first robotic arm. Now he is 3D printing customized robot arms that can be controlled with the mind. Applicants scan their limbs using a home 3D scanner, then place the order online.

LaChappelle was first motivated when he met a child amputee at a science fair. She was wearing an $80,000 prosthetic arm that didn’t provide much functionality.

“I couldn’t believe this was the best thing available for her, and that’s when I decided to find out how I can create something that provides physical utility,” LaChappelle told WXII.

A decade later, LaChappelle’s TrueLimb can be specially made to match skin color, weight, shape, and height, because of Unlimited Tomorrow’s custom software. For just $8,000, amputees can have a customized, multi-grip robotic arm, with natural finger control for positioning and mobility.

“We’ve been working on this product and process for over six years, and I’m so happy to release this to the world to provide a tailored, affordable, and accessible solution,” LaChappelle told Med-Tech Innovation News.

The World Health Organization estimates that 30 million people need a prosthetic device. While a purely cosmetic prosthetic arm can cost less than $5,000. A functional artificial limb, like a prosthetic hook, is about $10,000. And the highest price tag, $20,000-$100,000, is for an advanced arm, like TrueLimb, controlled by muscle movement.

TrueLimb has features like haptic feedback, individual finger control, and multi-day battery life. With myoelectric sensors in the limb sockets that read muscles, users can control the limb with their minds. Plus, embedded into the limb is cloud access, which enables software upgrades as they become available.

Unlimited Tomorrow isn’t the only innovator in bionics. A team of engineers at the University of Michigan created an AI prosthetic leg, then gave away the plans for free. They hope that researchers will piggy-back off of their work and increase momentum in bionic limbs. Hugh Herr, a bionic designer at MIT, is developing limbs that could outperform human limbs.

And last year, Open Bionics announced that it launched its Hero Arm prosthetic limb in the United States. Like TrueLimb, they are 3D-fitted and printed, keeping the process quick and the cost low — starting at $3,000. The Hero Arm also has sensors to help wearers articulate the hand.

For LaChappelle, creating the prosthetic arm is only the first step. He hopes to expand to other limbs and exoskeletons, or wearable robotic suits.

“It’s hard to find the words to describe how it feels,” LaChappelle told WXII. “The first time someone ever used my device was extremely emotional for me… Now I’ve gotten to witness that moment many, many times and it doesn’t stop getting that emotional.”

Bionics
New bionic arm is incredibly close to the real thing
A new bionic arm is so intuitive, wearers think and behave like people without amputations while using it to perform everyday tasks.

Bionics
Many amputees couldn’t afford a bionic arm — until now
Indian startup Makers Hive has developed a bionic arm that’s not only 90% cheaper than most, but also more functional.
Up Next 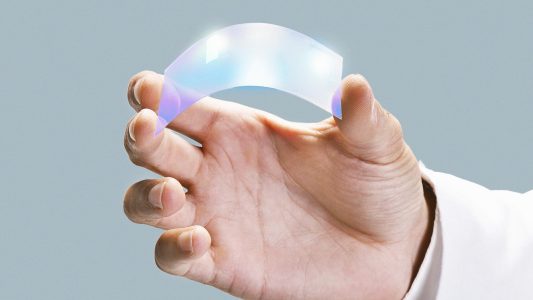 Coating implantable electronics in the polymer PEDOT can extend their life, which could make cyborgs more common in the future.

Bionics
The material that could help humans become cyborgs
Subscribe to Freethink for more great stories
Subscription Center
Challenges
Video
Freethink
Subscribe
We focus on solutions: the smartest people, the biggest ideas, and the most ground breaking technology shaping our future.
Subscribe