Fatty liver: Foie gras is the fattened liver of a duck or goose, and to produce it, farmers use feeding tubes to force the birds to eat two to three times a day for about two weeks.

This process, known as gavage, causes the bird’s livers to grow to 10 times their normal size, and by the time they’re slaughtered, the animals can have trouble walking or even breathing.

The challenge: The production of foie gras is, not surprisingly, highly controversial, and many people refuse to eat the food on ethical grounds.

“Foie gras is going through an existential crisis.”

More than a dozen nations have banned the production of foie gras, and some places, including California and New York City, have even forbidden its sale.

The idea: Cultivated meat startup Gourmey is developing a lab-grown foie gras it believes will allow people to enjoy the delicacy without compromising their morals or breaking the law.

“Foie gras is going through an existential crisis,” co-founder Nicolas Morin-Forest told Bloomberg. “We will be essentially unleashing the full foie gras potential and detangling the product from the controversy.”

Lab-grown foie gras: To create its foie gras, Gourmey extracts cells from a duck egg and places them in a bioreactor along with nutrients that prompt the cells to multiply.

After the cells are harvested from the bioreactor, Gourmey combines them with plant-based oils and fats to produce the lab-grown foie gras.

“It took about 600 to 650 different compound interactions from the start until we found a satisfying prototype version,” Morin-Forest told Fortune.

Looking ahead: Seemingly everyone who’s tasted Gourmey’s lab-grown foie gras (though that may be a biased sample) believes it’s indistinguishable from the kind that comes from birds.

The startup’s next goal is getting the production price down — right now, the cultured meat costs about $500 per pound, while the price of traditional foie gras is closer to $80 per pound.

If successful, Gourmey could find itself with a lock on the foie gras market in places where the delicacy is currently banned.

“The ambition is that in many places cultivated foie gras not only will be the best option, but it will be the only option,” Morin-Forest said. 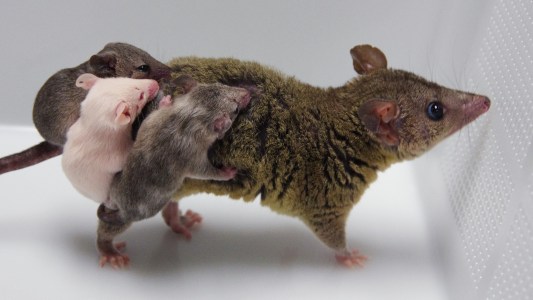 CRISPR technology has been used to create gene-edited opossums, a breakthrough that could have huge implications for medical research.