According to Einstein’s theory of special relativity, first published in 1905, light can be converted into matter when two light particles collide with intense force. But, try as they might, scientists have never been able to do this. No one could create the conditions needed to transform light into matter — until now.

Physicists claim to have generated matter from pure light for the first time — a spectacular display of Einstein’s most famous equation.

This is a significant breakthrough, overcoming a theoretical barrier that seemed impossible only a few decades ago.

It sounds simple enough, but no one has been able to make it happen.

What does E=mc2 mean? The world’s most famous equation is both straightforward and beyond comprehension at the same time: “Energy equals mass times the speed of light squared.”

At its most fundamental level, it means energy and mass are various forms of the same thing. Energy may transform into mass and vice versa under the right circumstances.

However, imagine a light beam transforming into, say, a paper clip, and it seems like pure magic. That’s where the “speed of light squared” factors in. It determines how much energy a paper clip or any piece of matter contains. The speed of light is the factor needed to make mass and energy equal. If every atom in a paper clip could be converted to pure energy, it would generate 18 kilotons of TNT. That’s around the size of the Hiroshima bomb from 1945.

(Still can’t picture it? Me neither.)

You can go the other way, too: if you crash two highly energized light particles, or photons, into each other, then you can create energy and mass. It sounds simple enough, but no one has been able to make it happen.

The great experiment: In 1934, American physicists Gregory Breit and John Wheeler first described how to create this wild transformation. But the colliding light particles would need to be extremely powerful gamma rays, which scientists haven’t created to this day.

A team of scientists from Brookhaven National Laboratory in New York wanted to take another shot at it.

“In their [1934] paper, Breit and Wheeler already realized this is almost impossible to do,” physicist Zhangbu Xu said in a statement. “Lasers didn’t even exist yet! But Breit and Wheeler proposed an alternative: accelerating heavy ions. And their alternative is exactly what we are doing at RHIC.”

Since they couldn’t accelerate light particles, the team opted for ions, and used the Relativistic Heavy Ion Collider (RHIC) to accelerate them at extreme speeds. In two accelerator rings at RHIC, the accelerated gold ions to 99.995% of the speed of light. With 79 protons, a gold ion has a strong positive charge. When a charged heavy ion is accelerated to incredible speeds, a strong magnetic field swirls around it.

“When the ions are moving close to the speed of light, there are a bunch of photons surrounding the gold nucleus, traveling with it like a cloud,” Xu said.

That magnetic field produces “virtual photons.” So, in a roundabout way, they accelerated light particles by piggybacking them on an ion.

When the team sped the ions in the accelerator rings with significant energy, the ions nearly collided, allowing the photon clouds surrounding them to interact and form an electron-positron pair — essentially, matter. They published their work in the journal Physical Review Letters.

“Our results provide clear evidence of direct, one-step creation of matter-antimatter pairs from collisions of light as originally predicted by Breit and Wheeler,” Brandenburg said, reports the Daily Mail.

Physics
The case for dark matter has strengthened
Though it makes up about 26% of the Universe, we cannot see dark matter. But we know it’s there because we can see its effects.
By Don Lincoln

Outer Space
Ring galaxies, the rarest in the Universe, finally explained
After decades of wondering how ring galaxies form, we’ve caught them in enough stages of evolution that we finally know where they come from.
By Ethan Siegel
Up Next 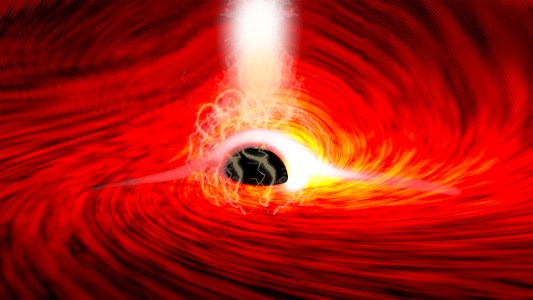 The first direct observation of light from behind a supermassive black hole confirms a prediction in Einstein’s theory of general relativity.