The scientists who brought us the first lab-grown mini-brain are now modifying brain tissue to carry a gene that once belonged to ancient humans. Their goal: find out what ancient brains were like and how the brains of modern humans differ.

“The question here is what makes us human,” Alysson Muotri, a neuroscientist at the University of California, San Diego, told CNN.

“Why are our brains so different from other species including our own extinct relatives?”

Homo sapiens is not the only human species to ever roam the earth. More than 30,000 years ago, our two closest relatives, the Neanderthals and Denisovans, inhabited the planet from Europe to Asia and Africa. Denisovans and Neanderthals did interbreed with the ancestors of modern humans. But why Homo sapiens was the only one to survive, and what makes us different, is mostly a mystery.

Researchers look for clues in fossils. But, for Muotri and collaborator Cleber Trujillo, fossils couldn’t answer their questions about ancient brains. Sure, skulls give us clues — early human brains were actually slightly larger than today’s humans.

But skulls don’t provide the full picture, and brains themselves aren’t in the fossil record because soft tissue doesn’t withstand the test of time.

Recently, researchers began scanning for information in DNA from fossilized bones to get a deeper understanding. (One team even painted a hypothetical portrait of a Denisovan based on clues in DNA.)

Trujillo and Muotri compared the genomes of modern humans (us) to Neanderthals and Denisovans and found a relatively small number of genetic differences.

“We asked what is unique about us? We ended up with only 61 protein-coding genes that are different between modern and archaic humans,” Muotri told CNN.

Probing further, they looked at brain-specific differences and found only one gene variant lost to evolution: NOVA1. The modern version of NOVA1 differs by only one base pair. But the gene plays a role in early neural development and controls hundreds of other genes. Since they only differed by one base pair, what did that mean for ancient vs. modern brain development?

What Makes Us Different?

To find out, the team decided to grow Neanderthal-like mini-brains in their lab and compare them to mini-brains with DNA from modern humans. Mini-brains and other organoids (tiny, lab-grown organs that typically start with a few stem cells) are a decent proxy for real human organs when studying anything from cancer to coronavirus.

The team used the gene-editing tool CRISPR to modify stem cells to replace the modern NOVA1 gene with the archaic Neanderthal version. Then, they stepped back and let the cells grow into a miniature, pea-sized brain cortex.

The differences between the ancient and modern organoids, described in their paper published in Science, were apparent at first glance. The modern cells were round, whereas the archaic ones were “popcorn” shaped.

The minibrains also behaved differently, according to Scientific American. Neurons in the Neanderthal version fired in an earlier developmental stage than in modern minibrains — indicating that ancient brains may have matured faster than modern brains.

“The fact that all humans, or nearly all humans, now have this version and not the old one means it gave us a tremendous advantage at certain points during evolution. So the question we have now is, what are these advantages?” Muotri told Nature.

Muotri says that the apparently quicker development of the ancient minibrains aligns with what we know about chimpanzees, whose neurons also mature more quickly than human neurons. Chimpanzees become independent in less time than humans, who rely on care and protection from parents for a relatively long time.

“A baby chimpanzee can outsmart a human newborn by far. We need time to nurture our babies until they become independent. We don’t see that in other species. I think what we’re seeing here is something similar,” Muotri told CNN.

But this new work could give insight into what makes us different from these ancient human populations — what makes humans human at all.

J. Gray Camp is a molecular biologist at the University of Basel in Switzerland who was not involved in the study. Last year Camp’s lab also grew brain organoids with Neanderthal DNA, as a proof of concept study. Muotri’s work focuses on the effect of one gene. Camp says this new work “shows that one can resurrect an archaic human allele that has otherwise been lost to history, and study it in a dish,” reports Scientific American.

But, as with all research, there are reasons to be cautious.

The ancient gene introduced into cells of modern humans is far from being an accurate or complete Neanderthal brain model.

“The most significant finding is that that you revert (the gene) to an ancestral state, and you see an effect in the organoid,” Wolfgang Enard, an evolutionary geneticist at the Ludwig Maximilian University of Munich in Germany, told Nature. He was impressed that one small gene could create such a visible difference. But he is also skeptical about how much this tells us about real Neanderthal brains.

The team only looked at one gene. There are still 60 more genes that distinguish ancient humans from modern humans. The next step would be to look at these genes individually and holistically, and see whether they could similarly affect human development. 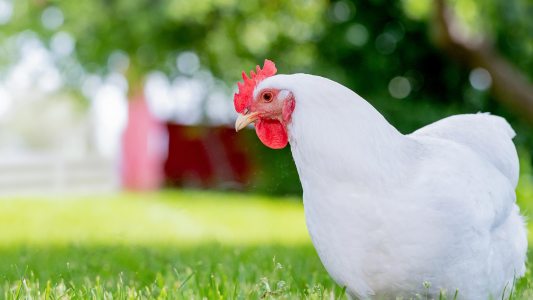 An outbreak of avian flu in chickens can mean millions of birds dead and billions of dollars lost. This startup wants to engineer flu-resistant poultry.

Virology
Can CRISPR engineer immunity to avian flu in chickens?
By B. David Zarley
Subscribe to Freethink for more great stories
Subscription Center
Sections
Video
Freethink
Subscribe
We focus on solutions: the smartest people, the biggest ideas, and the most ground breaking technology shaping our future.
Subscribe