Chemical engineers at MIT have developed a new material that’s stronger than steel and as light as plastic — and it might one day protect your smartphone, support new buildings, hold up bridges, and more.

Polymerization 101: Under the right conditions, small molecules called “monomers” will connect to form chains called “polymers.” The polymers can be turned into 3D shapes — and that’s how we get all plastic products.

Researchers have long suspected that if they could develop a polymerization process that coaxed monomers into forming flat sheets, not chains, such a material would be super strong and lightweight.

But after years of failures, it was widely thought to be impossible.

The new material can withstand four to six times as much force as bulletproof glass before deforming.

Not so fast: MIT scientists have now proven it can be done, developing a polymerization process that causes monomers to self-assemble into sheets of a new material they’ve dubbed “2DPA-1​​.”

“Instead of making a spaghetti-like molecule, we can make a sheet-like molecular plane, where we get molecules to hook themselves together in two dimensions,” senior author ​​Michael Strano told MIT News. “This mechanism happens spontaneously in solution.”

Because the molecules self-assemble during the polymerization process, scaling up manufacturing could be relatively easy: just add more of the starting materials to the initial solution.

Expectations met: The new material has incredible properties. In testing, it proved to be as light as plastic and twice as strong as steel. It’s also impermeable to gasses and can withstand four to six times as much force as bulletproof glass before deforming.

These characteristics give the material potential applications in everything from construction to consumer electronics, according to the researchers, who have filed two patent applications for their new polymerization process and are now exploring ways to use it to create other materials.

“We don’t usually think of plastics as being something that you could use to support a building, but with this material, you can enable new things,” Strano said. “It has very unusual properties, and we’re very excited about that.”

New material class: Researchers have only been creating “2D” materials like this since 2004, but the class already includes several “super materials,” such as the super-light superconductor graphene and the uber-tough hexagonal boron nitride.

Despite their remarkable properties, these materials have largely remained in the lab as researchers work to scale up production — but based on the comments from the MIT team, mass production might not be such a problem with 2DPA-1. 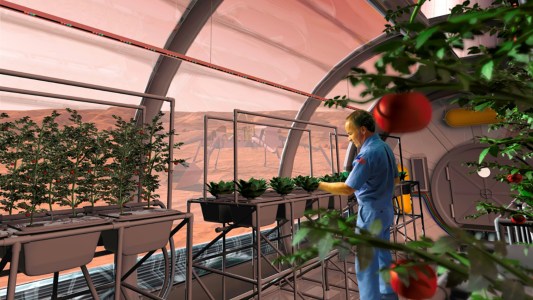 NASA’s Deep Space Food Challenge will give away $1 million in exchange for prototypes that could help feed astronauts on long-term missions.