Olympic swimming pools have to conform to certain dimensions, but engineers have some wiggle room within those parameters.

By taking advantage of the rules of physics, they’ve learned how to help Olympic swimmers perform their very best by designing “fast” swimming pools.

Here are some of the tricks of the trade.

Hidden depths: Olympic swimming pools have to be at least 2 meters deep, but tacking another meter on can improve times for Olympic swimmers.

“When swimmers dive in to start a lap or strike the surface with their hands and feet, the compression waves they create rebound when they hit the bottom of the pool,” Jud Ready, a principal research engineer at the Georgia Tech Research Institute, explained.

“If the pool is too shallow, the wave energy is able to bounce off the bottom and reach the competitors, negatively affecting their speed,” he continued. “Three meters is deep enough that the reflected wave cannot reach the surface.”

There’s a reason engineers don’t want to design Olympic swimming pools that are deeper than 3 meters, though.

Olympic swimmers can use the bottom of the pool as a reference point to help them judge how fast they’re swimming. If that bottom is too far away, they may feel like they aren’t swimming as fast due to a phenomenon called “motion parallax.”

That can psychologically affect their performance, so 3 meters has become the standard depth for Olympic swimming pools.

Wave goodbye: When Olympic swimmers dive into a pool at the start of the race, they create waves that can bounce off the pool’s perimeter and hit competitors in the outside lanes, putting them at a disadvantage.

Engineers can eliminate this issue by designing larger gutters around Olympic swimming pools. These gutters capture the waves of water before they can bounce back, leveling the playing field for Olympic swimmers in the outside lanes.

Placing return jets evenly across the floor of a pool instead of the sides — where you’ll find them in most recreational pools — can also ensure swimmers in the outside lanes aren’t forced to cope with water currents that don’t affect competitors in the middle.

“When you’re talking about 0.01 of a second deciding a gold medal instead of a silver, any and all extra friction matters,” Ready said. 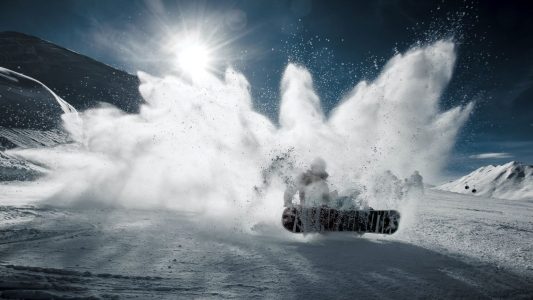 Sports
Olympic skiers and snowboarders are competing on 100% fake snow – here’s the science behind it
By Peter Veals
Subscribe to Freethink for more great stories
Subscription Center
Sections
Video
Freethink
Subscribe
We focus on solutions: the smartest people, the biggest ideas, and the most ground breaking technology shaping our future.
Subscribe