Morgan Stickney was once an Olympic hopeful. A powerhouse in the pool, Stickney was unstoppable. Not even a rare, painful vascular disease could keep her out of the water. But, after years of suffering, Stickney had one leg, then the other amputated below the knees. The decision that changed her life could also change the future of amputations and prosthetic limbs.

Stickney opted for an experimental surgery called the Ewing Amputation. Unlike standard amputations, which sever nerves and muscles, the Ewing amputation reconnects those fibers, maintaining communication with the brain. The procedure could restore a natural sensation to prosthetic joints.

In other words, someday, an amputee could think about moving their prosthetic ankle, and it would actually move. In the mind of the amputee, it feels like they are moving an organic limb instead of a prosthetic. Stickney was the first double amputee to have the Ewing amputation and then try on an AI bionic limb.

Now, back in the pool, Stickney has her eyes on competing in the Paralympics. Freethink spoke with the parathlete about competition, bionic limbs, and the drive to keep swimming.

Freethink: You had an experimental surgery for your amputation.

Morgan Stickney: I’m actually the first bilateral Ewing amputee in the world. I had a really good orthopedic surgeon, but unfortunately, we were too close as individuals, and he didn’t feel comfortable amputating my leg because of how close we were. So I talked to this prosthetist, and he recommended Dr. Matthew Carty, which is my surgeon that I have now that does the Ewing amputation.

We did my first leg in May 2018. Later, I started having the same issues with my right leg. I was in excruciating pain all the time. From the moment I felt the pain, I just knew, I had a gut feeling that I was going to lose my leg. And when you’ve already lost one leg, and then you’re thinking about losing your other leg, it’s one of the scariest things you can even imagine.

Morgan Stickney: It’s definitely challenging when I found out I had to lose my second leg. It was pretty devastating. I mean, going from a unilateral (single) to a double amputee, there’s a whole new ballgame of challenges.

And then in the world of swimming, things are more difficult. With time, it’ll just become my new normal. But it definitely is more challenging than being a unilateral.

Today!! A new beginning. A comeback. For all of you that have supported me on this journey, thank you. And for all of you that told me I’d never swim again, well you were dead wrong. The past few months have been full of crazy challenges, but I’ve met some of the most amazing people along this journey. Thank you to everyone that has believed in me and helped me get to where I am today! ‍♀️

Freethink: How has being a double amputee changed swimming for you?

Morgan Stickney: As a unilateral amputee, you still have a foot to push off the wall and to kick with. As a bilateral, my legs — the residual limbs — don’t propel me at all in the water, so I don’t really kick with them. And then to do flip turns and start, I have to use my knees and tibia bones.

So, it’s definitely different. My legs are still really delicate and sensitive, and so right now, training in the pool, I’m using knee pads on my legs to be able to do flip turns to get better speed and to try to train my body.

Freethink: Why did you choose the Ewing amputation and not a proven method — not an amputation that doctors have been doing time and again?

Morgan Stickney: The most compelling thing that I saw in the Ewing amputation was that there’s not supposed to be phantom pain. So that’s what really drew me to the study. With the Ewing amputation, Dr. Carty was very confident that that pain would go away.

Also, with a standard amputation, you can lose all your muscle and tissue with time. With a Ewing amputation, there is not supposed to be atrophy. For me, that was huge. Those are the two main things. And then obviously there are benefits like being able to use the robotic prosthetic.

Freethink: What was it like to be able to try out the robotic prosthetic at the MIT Media Lab, and how did it feel compared to a regular prosthetic?

Morgan Stickney: I’ve been an amputee for almost two years on my left side, it’s pretty standard for me to just pull my prosthetic on and not move my muscles. I’ve become accustomed to it. But to be able to use the foot in the MIT media lab and move the robotics foot and ankle — it’s very interesting. I think in ten years if there’s something like that on the market, it could really help bilateral amputees.

Something that I’ve learned being a bilateral is that ramps are really difficult for me, especially if they’re not ADA accessible because I don’t have ankles. So if a ramp or a hill is too steep for me, I have to go up it sideways. I think a robotic leg would be a huge benefit in an instance like that.

Freethink: Now that you are training for the Paralympics, does it ever feel like you’re learning a new sport?

Morgan Stickney: Whenever I go into the pool, it always feels like home no matter what happens. Once I lost my second leg, and I jumped into the pool, it felt like where I left off last time. It had been two years since I got into the pool because of everything I was going through.

When it came time for me to get into the pool, I was so excited. The only thing that was odd was kicking. I tried kicking with my residual limb, and it didn’t propel me at all forward, and it just felt really heavy. That was the weirdest part.

But other than that, I was back where I was before. But now swimming is basically all upper-body. It kind of kills my arms after a two-hour workout.

Freethink: What do you want people to know about what it is like to train for the Paralympics?

I’d like people to know that we train just as hard as Olympians, if not harder. The Paralympics is a really fun community of people, and it’s a lot closer knit than the regular Olympics because it’s a smaller group of people. I think if there are people out there with a disability that they should try to get involved in a sport that they really enjoy. 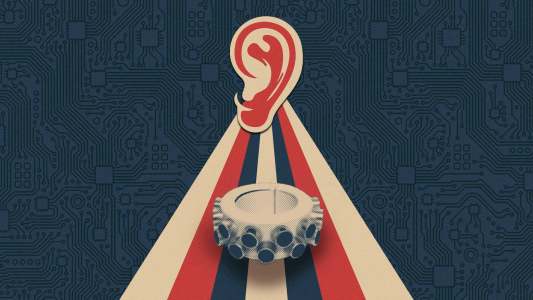 Researchers at the University of Chicago have developed an ultrasonic audio jammer that doubles as a fashion accessory.