What’s going on in the white room is as important as what isn’t. Behind thick walls and a door sealed with a handwheel, the world’s magnetic fields are reduced to essentially nothing. Freed from this background noise, the magnetic fields generated by neurons firing in the brain — fields a billion times smaller than Earth’s — can be measured, providing a glimpse into the brain’s black box.

Inside the room, sitting snug on 17-year-old Keya Shapiro’s head, is a helmet, dotted with small black rectangles — each containing a bit of quantum physics, which helps peer into the inner workings of her brain.

Born with a left side that is weaker than her right, Keya has had to do pediatric constraint-induced movement therapy (PCIMT) for years. For Keya, the therapy involves putting her right arm in a cast and performing physical therapy with her left hand, strengthening it and developing dexterity.

The therapy has worked: the high school senior plays tennis and shoots photos.

But now, Keya’s PCIMT experience is going to become a test case for a different way to view what’s going on inside the human brain.

When it comes to the brain, there is so much we just don’t know.

Current methods of imaging the brain all have their drawbacks. They can be too slow to show what’s going on, as if watching a View-Master instead of a movie. They can be imprecise, not giving us the finer details of what’s going on. And, like MRI, they can require large equipment, unusual clinical settings, and lying unnaturally still for long periods of time.

We can’t yet measure the brain how we use it.

That’s what this experiment is supposed to change. The Virginia Tech researchers outside of the sealed box are imaging Keya’s brain using a tool that may be a step towards solving those limitations.

Called “optically-pumped magnetometers” (OPMs), they measure the magnetic fields created by firing neurons — which is why Keya is sitting in that hole in the Earth’s magnetic field, which would normally drown out the neurons’ tiny signals.

OPMs are faster than other brain imaging devices, and they provide a more accurate picture of where neurons are firing than measuring the brain cells’ electrical fields.

They can also allow a subject to move while recording their brain activity, getting us one step closer to neuroscience’s holy grail, measuring the brain out in the wild. (Gotta do something about those blaring magnetic fields out there, though.)

The OPM and white room technology the researchers are developing will allow them to fulfill their mandate “to be the first in the world to study the brain activity underlying social interactions during face-to-face, upright exchanges”  — starting with patients like Keya and their therapists.

The Brain and the Blue Ridge

Regional jets — the kind painted like United but operated by Air Wisconsin — bounce on the winds above Roanoke. You look up at the mountains of Virginia’s Blue Ridge as you land; their jagged green lines hem the horizon.

And in their shadows sits the Fralin Institute.

Keya’s been coming to Virginia from her home in Minnesota — where she lives with her mom, brother, and mini-Bernedoodle — for her PCIMT treatments. She works with senior occupational therapist Mary Rebekah Trucks, in the lab of Stephanie DeLuca, co-director of the Neuromotor Research Clinic.

Now, DeLuca is joining her Virginia Tech colleague Read Montague — along with a team at the U.K.’s Nottingham University — to use OPM to measure the brains of PCIMT patients and their therapists.

DeLuca is hoping that brain measurements can help reveal best practices in the therapy. How important is the constraint on the patient’s stronger limbs? How much work should the patient do? Are there biomarkers to show the therapy is working?

That data could then be used to optimize PCIMT — and help convince more insurance providers to pay for it.

For Montague, the OPM is yet another way to see into the brain.

Harnessing quantum physics, the researchers can read the incredibly minute magnetic fields of neurons firing — measuring the brain with speed and precision.

As head of Fralin’s Center for Human Neuroscience Research, Montague (who’s got a hint of Reed Richards about him) and his colleagues have been training AI models to diagnose mental health disorders; using fMRI to better understand and battle addiction; and dropping probes into the brains of patients to take real-time measurements of their neurotransmitters.

The idea is that future patients coming to Roanoke to receive PCIMT with DeLuca and Trucks will have their sessions measured as well — therapist and patient’s inner-most interactions revealed by a quantum effect on atoms.

Eventually, the hope is that the OPM sensors can be placed ever closer to patients’ heads, allowing for ever more precise measurements and something even closer to measuring the brain in a realistic setting.

“It’ll take developing into a field for it to really move,” Montague says. “Not just us here in Appalachia.”

Currently, no one else in North America is doing functional neuroimaging exactly like this, Virginia Tech says; there’s a similar, smaller facility in Texas, but it is not yet designed for measuring two people at once or allowing for movement.

The Brain at Work

Functional neuroimaging is exactly what it sounds like: taking images of the brain at work. There’s multiple ways to do this, and all have their pros and cons.

Take functional MRIs. An fMRI measures changes in blood flow. By looking at where the blood is flowing in the brain, we can infer what parts of the brain are working harder than usual.

The technique has some notable drawbacks, however; measuring the blood flow, rather than the brain cells, is an indirect measurement of brain activity. fMRIs also take an eternity between each snapshot — they have low “temporal resolution.”

It’s like a flipbook of activity compared to a video.

MEGs, a category that includes OPM, sense brain cells’ magnetic fields, and EEGs measure the electrical currents. And they do so much quicker than the fMRI.

“What MEG and EEG look at is the function of the brain,” says Elena Boto, a research fellow at the University of Nottingham’s Sir Peter Mansfield Imaging Centre.

“The brain, we know it’s an electrical circuit. So to measure the functionality of the brain, you need to look at the currents — or magnetic fields associated with these currents — that are produced by assemblies of neurons in the brain.”

What sets MEG apart from EEG is how accurately it can pinpoint the location of the neurons that are firing.

“The magnetic field goes through your skull and water undisturbed,” says Svenja Knappe; the electric signals do not, and the end result is a blurred image.

Knappe is an associate research professor at the University of Colorado and co-founder of FieldLine Inc., an OPM-MEG maker. Knappe was part of the team that developed OPMs at the National Institute of Standards and Technology (NIST), and was previously senior scientist at Quspin, which commercialized the OPM and built the ones in use at Virginia Tech.

Most MEG readings are taken using sensors called SQUIDs. These need to be kept frigid via liquid helium to work, so SQUIDs are placed into rigid, Cerebro-like headpieces that hamper movement and keep the sensors precious centimeters away from the brain. Even that tiny distance impacts how well the SQUIDs can measure the brain.

The OPM sensors on Keya’s head do not need to be kept ultra-cold. Without the need for liquid helium, they can be deployed much closer to her scalp.

“The main benefit of the OPMs from my point of view is that they can be placed on the head closer to the source of interest,” says Samu Taulu, director of the I-LABS MEG Brain Imaging Center at the University of Washington.

Because the magnetic fields are so small, even a minute distance between the sensors and the brain reduces accuracy. The infants measured via MEG in Taulu’s lab provide a better reading than you or I would; their skulls are thinner!

The lack of liquid helium means that the OPM sensors can be free of a rigid helmet, which makes movement easier. According to Taulu, subjects in traditional MEGs can move as well; we’ve got the math to balance that out when we look at the data. Although, Knappe points out, the rigid helmets are stationary, limiting any movement.

From Atomic Clocks to the Black Box

Each of the OPM sensors are essentially an atomic clock.

They contain rubidium gas sensitive to magnetic fields and their orientation.

“Depending on the fluctuations of the magnetic field … how cloudy that [gas] is changes,” says Fralin Biomedical Research Institute associate professor Stephen LaConte.

By shining a laser through the gas, OPMs use the amount of light transmitted to measure the presence and strength of magnetic fields.

By eliminating the magnetic field of the Earth and other objects within the mag-shielded room — and controlling for the ones inside the room, like your heart and muscles — you can put together a picture of where neurons are firing in the brain with a speed and accuracy that other neuroimaging techniques lack.

Keya sits and stares, and the magnetic fields generated by her brain are measured. She’s not supposed to actively think, which of course now has her realizing how she thinks.

Inside the white room, Keya stares at a plus sign projected on a screen. She’s wearing a cast extending from her right shoulder out past her fingertips. The device is taking a resting-state reading of her mind; the sensors are warm on her head, almost lulling her to sleep.

The cast is removed, she sits and stares, and the magnetic fields generated by her brain are measured again. She’s not supposed to actively think, which of course now has her realizing how she thinks.

She wonders if Montague and the researchers, watching via webcam from an observation room, can tell she can hear them over the comm system — can tell where in her brain she is hearing them.

She taps her fingers, left or right, following guidance on the screen; she does it again, but only in her head.

And the magnetic fields hum secrets to the scientists outside. 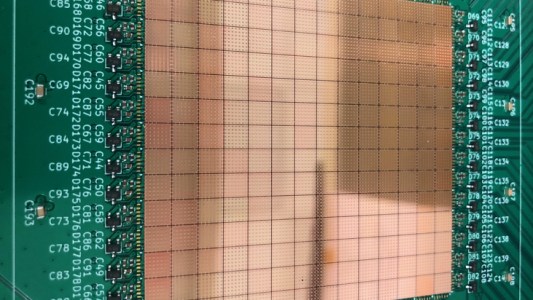 The advance may enable real-time imaging devices that are smaller, cheaper, and more robust than other systems.