Most people don’t realize that the sugarcane plant provides more than a sugar rush. The plant’s oil is also used to make bioethanol for biofuels and plastic. But this sweet crop also has a dark side — a significant environmental impact.

The problem: The sugarcane plant is one of the most productive plants on the planet, accounting for 80% of global sugar production and 30% of global bioethanol production. It is a major crop in many countries, covering 65 million acres of land across the globe and at least 25% of farmland in a dozen or more countries.

“Now we have very effective tools to modify sugarcane into a crop with higher productivity or improved sustainability.”

But the increasing need for sugar land fuels deforestation. The crop also requires a lot of water — a whopping nine gallons of water per teaspoon of sugar, according to the World Wildlife Fund.

Researchers could resolve some of these problems by breeding new varieties of the sugarcane plant. But the complicated genome makes it a challenging and lengthy process.

CRISPR facilitates gene editing: Instead of spending years in trial and error, trying to breed out undesirable genes and adding new ones, researchers turned to CRISPR, a molecular scissor for DNA, to make a few quick edits. With CRISPR, it’s like hitting the cut, copy, paste commands on the keyboard. Researchers can precisely edit specific genes they want to change, remove them, and add in more desirable genes.

Scientists have used CRISPR to create genetically modified trees that can sequester more carbon and ultra-fast growing duckweed. Now, they have used CRISPR for the first time in a sugarcane plant.

“It’s actually very interesting how our current techniques, even just five years ago, were very challenging and costly. Nowadays, we’re able to do many things because of gene editing that we would not have even considered before. I feel very privileged and I look forward to the day we can make gene-edited agricultural products available to the average person,” said Center for Advanced Bioenergy and Bioproducts Innovation (CABBI) researcher Ayman Eid in a statement.

Not all genomes are alike, and sugarcane is particularly challenging to edit. It is challenging because it has many redundant copies of genes and many chromosomes, requiring researchers to target multiple areas to edit one particular trait. This is why the ability to edit sugarcane’s genes is such a breakthrough: it opens up the possibilities for new varieties of crops that my require less water, grow faster, or produce more biomass — all qualities that could reduce the environmental impact.

Proving the work: To test their ability to edit sugarcane, the team at CABBI first tried manipulating traits that impacted the visual appearance of the plant. They turned off a gene that produces magnesium chelatase, which helps the plant make chlorophyll. Without it, the leaves looked yellow or light green. They also enhanced the plant’s resistance to herbicides, so fewer chemicals are needed. They published their work in the journal Frontiers in Genome Editing.

The team at CABBI are already on to the next step — improving sugarcane crops. By targeting certain genes, they aim to increase biomass, lipid production, and specialty fatty acid production. By fine-turning these characteristics of the sugarcane plant, CABBI is taking one more step toward their ultimate goal of replacing petroleum by producing better fuels and other goods from plants.

“Now we have very effective tools to modify sugarcane into a crop with higher productivity or improved sustainability,” said lead researcher Fredy Altpeter in a statement. “It’s important since sugarcane is the ideal crop to fuel the emerging bioeconomy.” 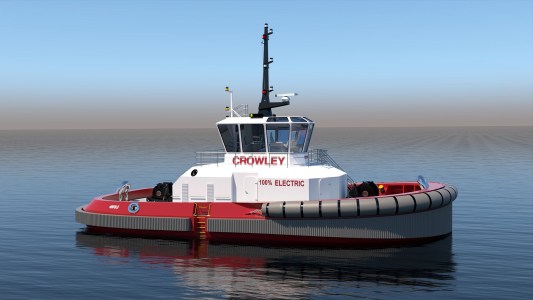 Crowley Maritime Corp. is building the U.S.’s first electric tugboat for the port of San Diego.

Transportation
The first U.S. electric tugboat will replace a tug that burns 30,000 gallons of diesel per year
By Teresa Carey
Subscribe to Freethink for more great stories
Subscription Center
Sections
Video
Freethink
Subscribe
We focus on solutions: the smartest people, the biggest ideas, and the most ground breaking technology shaping our future.
Subscribe