Extreme wildfires can be hella intense. In California, fires erupted into tornadoes in 2020. And in Australia, wildfire smoke triggered a deadly atmospheric oddity called a temperature inversion, so severe that it interfered with cell signals.

But researchers at Monash University in Melbourne saw this as an opportunity to look into how cell tower signals could indicate the concentration of bushfire smoke that is suffocating towns and cities — providing potentially life-saving data.

Peering into the smoke: The team, led by engineer Adrien Guyot, happened to be looking at cell data for a rainfall study when the fires happened.

“Driven by curiosity, we looked at our mobile phone dataset for that period, to see if the signal strength would be affected by smoke,” Guyot, lead author of the paper in the journal AGU Advances, told create.

When they looked at cell signal variations during the 2019-2020 bushfire season, which engulfed most of Australia in smoke, they saw distinct signal patterns. They realized that the patterns correlated with the amount of smoke present. The unmistakable patterns could be used to predict future smoke events.

Instead of traveling in a straight line, like cell signals typically do, the signals bounced in odd patterns. Specifically, they investigated the signals that travel between cellular antennas on buildings — signals that are usually predictable and arrive at a measured time. Instead of going directly to the next antenna, the signal dipped toward the earth. The bouncy signal and its disrupted travel time had a measurable effect on the reception.

Typically, warm air is concentrated near the ground, and it gets cooler in the upper layers of the atmosphere. But the plumes of smoke blanketing the city absorbed the sun’s energy and blocked it from reaching the earth. The result was a hot layer of smoke above cool, ground-level air. And, the temperature inversion trapped the smoke near the ground, causing record levels of pollution and trapping the cellular signals.

Future applications: Australians are no strangers to bushfires. And the consequences to people and property are devastating. Air pollution from the 2019-2020 bushfires in Australia killed about 445 people. In California, the 2020 fires may have killed up to 3,000 people.

But predicting when a pollution-trapping temperature inversion will happen and how they will spread remains a challenge. Satellite imaging, modeling, and air quality instruments all have limitations. Some devices are costly and can’t be positioned in enough locations.

But cell towers are already everywhere. If a scientist can tap into that resource, they could feed the data into their modeling systems to create more informed predictions.

“It’s really exciting if we can actually use data from existing cellular networks to feed our forecasting models with high-resolution data to combine with satellite and weather,” Rebecca Hornbrook, an atmospheric chemist at the National Center for Atmospheric Research, told Wired. Hornbook was not involved in the study. “It could be really helpful.” 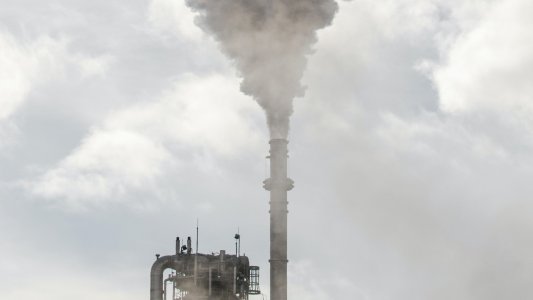 A new startup plans to strap direct air capture technology to balloons and float them into the atmosphere to collect and store carbon dioxide.

Climate Crisis
How balloons could soak up carbon and fight climate change
Subscribe to Freethink for more great stories
Subscription Center
Sections
Video
Freethink
Subscribe
We focus on solutions: the smartest people, the biggest ideas, and the most ground breaking technology shaping our future.
Subscribe