To address global climate change we need to rapidly reduce global greenhouse gas emissions. This often raises debate of where our attention should be: do we focus on energy or food; fossil fuels or meat? But this is a false dichotomy. If we don’t achieve large changes to both, then we stand little chance of coming close to our climate targets. We don’t have the option of neglecting one or the other.

Energy accounts for two-thirds to three-quarters of global greenhouse gas emissions. Getting off of fossil fuels should be our top priority.

But equally, as we will see in this article, even if we reduce non-food emissions to zero tomorrow, emissions from food production alone could hinder our chances of keeping temperature rise below 1.5°C or 2°C by the end of the century. Ignoring food emissions is also not an option.

In this article I take a look at projections of emissions from food over the coming century, and what options we have to reduce them.

We can’t ignore emissions for food

In a paper published in Science, Michael Clark and his colleagues looked at how food emissions might evolve over the coming century, and they studied whether these would be compatible with our global climate targets.2

Let’s consider the scenario that we continue along a similar pathway to the past: their business-as-usual projection. This assumes that global population increases in line with the UN’s medium fertility scenario; per capita diets change as people around the world get richer (shifting towards more diverse diets with more meat and dairy); crop yields continue to increase in line with historical improvements; and rates of food loss and the emissions intensity of food production remain constant.

If we stopped burning fossil fuels tomorrow and eliminated all other emissions, food production alone would take us past our 1.5°C target by mid-century.

In the chart we see estimates of the cumulative emissions from food from 2020 through to 2100 under this scenario. Emissions here are calculated based on a metric called “global warming potential CO2 warming-equivalents (CO2-we)”. This accounts for the range of greenhouse gases, not just CO2 but also others such as methane and nitrous oxide.3 This is shown in comparison to our total carbon budgets for 1.5°C or 2°C.  The budgets are based on the thresholds set in the IPCC’s Special Report on Global Warming of  1.5°C to have a 67% and 50% chance of meeting our 1.5°C and 2°C targets.4

In the business-as-usual scenario the authors expect the world to emit around 1356 billion tonnes of CO2-we by 2100. This would take us well beyond the carbon budget for 1.5°C – we would emit two to three times more. Let’s be clear on what this means: if we stopped burning fossil fuels tomorrow and eliminated all other emissions, food production alone would take us past our 1.5°C target by mid-century.

What about 2°C? There we have a bit more room in our budget. But, food emissions would consume nearly all of it. To have a 67% chance of staying below 2°C, we have to keep cumulative emissions below 1405 billion tonnes. After food emissions, there would be only 49 billion tonnes left to share between all non-food sectors. That’s not 49 billion tonnes per year; that’s 49 billion tonnes split over 80 years. This is equal to just over one year of current fossil fuels emissions. If we wanted to meet our target we would have one year to move to a zero-carbon energy system.

If we wanted to give ourselves a bit more room, and hope for a 50% chance of keeping below 2°C, we would have to reduce all non-food emissions to zero within 10 to 12 years.5

Ignoring food emissions is simply not an option if we want to get close to our international climate targets. Even if we stopped burning fossil fuels tomorrow – an impossibility – we would still go well beyond our 1.5°C target, and nearly miss our 2°C one.

How can we reduce greenhouse gas emissions from food production?

If we’re serious about tackling climate change we need to reduce emissions from food production. What can we do?

We have a number of options – some fall on the shoulders of consumers; some on producers. Importantly, the options on both sides can be incentivized and driven by better policies, legislation and investment. Alongside their projections of business-as-usual, Clark et al. (2020) also looked at the impact of five interventions for reducing emissions. This helps us see which changes could have the biggest impact, and how close they might take us towards the climate targets.

We have a number of options to tackle food production – some fall on the shoulders of consumers; some on producers.

In the chart we see the cumulative emissions from food between 2020 and 2100 under the following reduction scenarios:

We see that all of these individual interventions would reduce emissions. The biggest reduction would come from the adoption of plant-rich diets. Emissions would be halved compared to business-as-usual. Each of the five options takes us some of the way there, but none of them can do it alone. If we want to meet our targets we’d need to adopt several.

At the bottom of the chart we see two additional scenarios: these assume that we combine all of the five options and achieve them either partially or fully. Achieving them ‘partially’ means we would implement 50% of each scenario: we would reduce food waste by only one-quarter rather than half; we would still reduce meat and dairy consumption, but we’d be eating more than the EAT-Lancet recommendations; we would see a 20% reduction in emissions intensity of food production, rather than 40% etc.

If we partially adopted all of these options we would reduce emissions by 63%. Almost two-thirds. Achieving each of them partially would be much more impactful than any individual one fully.

If we fully adopted all of them by 2050 we would actually see net negative emissions. A greater than 100% reduction. How can this be? As I covered in a related article, when we reduce meat and dairy consumption and increase crop yields we need less agricultural land; forests and natural habitats can regrow on this abandoned farmland. This sequesters carbon – it’s like negative emissions. So while we would still be producing emissions from fertilizers; methane from cattle and rice etc., these would be offset by increased carbon uptake in regrowing vegetation. On balance we would end up with negative emissions.

Each of these options on their own gets us part of the way there, but to make a real difference we’re going to need to combine them. Combined, they shift us towards a global food system that is more productive, has a lower environmental impact, and provides a healthy, nutritious diet for everyone.

A false dichotomy: we need to reduce emissions from food and energy

Rather than working in opposition to one another, the contribution of food and energy to emissions reductions go hand-in-hand. They need to work together. If we don’t act on one, we need to act faster and earlier on the other. Higher emissions from food means we need lower emissions from other sectors, and vice versa.

If we can make changes to what we eat, and how we produce this food, we would not only reduce emissions but also have the potential to achieve net negative emissions.

This article originally appeared on Our World in Data. Read the the original article here. 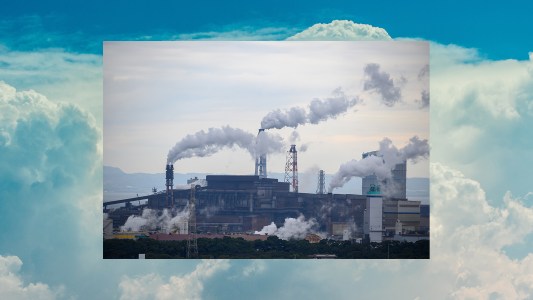 Climate Crisis
Climate transparency is about to get real with this independent database
Subscribe to Freethink for more great stories
Subscription Center
Challenges
Video
Freethink
Subscribe
We focus on solutions: the smartest people, the biggest ideas, and the most ground breaking technology shaping our future.
Subscribe