When you ask Shawn Boudreaux about how he got involved with the Cajun Navy, his responds with a wry smile. “You want to hear my nerd story?”

As with any organic movement, it’s hard to say when exactly the Cajun Navy started, but most would point to August 29, 2005, when Hurricane Katrina hit the Gulf Coast. Underequipped state, local, and federal authorities scrambled to deal with what would become one of the worst hurricanes in US history, leaving over a thousand people dead and causing over $125 billion in damage. By that evening, Louisiana’s governor and other state officials had put out a call for private boats to join in the rescue effort alongside the National Guard and other official first responders.

Speaking to the state legislature a month later, Governor Blanco described the response: “(Military and first responders) were joined by an unprecedented brigade of ordinary citizens who drove a fleet of school buses we commandeered, and they steered hundreds of private boats down flooded streets and toiled without pause to rescue at least 70,000 people.”

As Shawn described it, they were simply “a loose conglomerate of people who came together to help their neighbors when their neighbors needed help.” It was a powerful movement that showed how volunteers could dramatically complement the efforts of first responders.

The Cajun Navy remained more or less dormant until 2016, when major flooding hit south-central Louisiana. Many of the same people that came together ten years before returned, along with hundreds of new volunteers.

Shawn Boudreaux, a native of Lafayette, Louisiana, was one of those new recruits. Soon after getting involved with volunteer rescue efforts, Shawn realized there was an opportunity to improve how volunteers organized themselves and handled requests for help. His inspiration came from an unlikely source: a smartphone game.

In his spare time, Shawn was an avid player of a location-based, augmented reality game called Ingress. The game consists of two teams competing for control over virtual land that corresponds to real physical locations. Players “capture” land by visiting places in the real world and then weaving them together to create larger and larger virtual territories that have to be defended from the other team. (A few years later, the game developer Niantic would leverage the technology and insights from Ingress to create the viral sensation Pokémon Go.)

The upshot for the Cajun Navy was that the best Ingress squads used third-party apps to communicate with teammates, track their locations, and coordinate their movements—in real space. Chief among those apps were Glympse, a location tracking app, and Zello, which turns any phone into a walkie talkie.

Shawn realized these game strategies and tools exactly fit the needs of the Cajun Navy, which needed to communicate with a geographically dispersed group of volunteers and precisely track the location of everyone in the field.

“If I ever go onto talking about Ingress and my nerd side with members of the Cajun Navy,” he says, “they’re like, ‘Oh, there he goes again.'”

But however nerdy their origin, the group saw the value in Shawn’s insights and started building a protocol for how to use them. Volunteer dispatchers started using Zello to communicate with civilian boat operators, and they used Glympse to track their movements and match people in distress with the closest available volunteer.

By all accounts, it has had a dramatic impact on the Cajun Navy’s ability to organize and onboard new volunteers and coordinate their response in the field.

“This is just one of those groups that came out of necessity and just has now relied on technology, social media, and beyond, to do things that the government organizations may not be equipped to do,” Shawn says. “At least, not as quickly as we are.”

This innovation seems to have come at just the right time. The model they began experimenting with in 2016 was put to the test the following year, when a series of hurricanes battered the Gulf Coast in what would become the most expensive hurricane season on record, ultimately inflicting over $200 billion in damage.

One of the worst storms was Hurricane Harvey, which hit Houston in the fall of 2017. Cajun Navy groups raced to help, deploying all of their new tools. “The Cajun Navy was quick to jump into action for Hurricane Harvey,” said Shawn, “because we had prior experience.”

As Kevin Sullivan and Peter Holley pointed out in the Washington Post, “Harvey is the largest natural disaster to play out in the United States since the dawn of this hyper-connected era.” The iPhone was released in 2007, two years after Katrina. Glympse and Zello, two key apps used by Shawn and his group, were invented several years later. The technologies are new and have enabled a new kind of volunteer effort.

As the president of Cajun Navy Relief (one of a handful of Cajun Navy-themed volunteer groups around the Gulf Coast), one of Shawn’s major objectives is to continually improve their skills and make them as effective as possible.

“One of the things that gets misconstrued the most is that everybody out there doing Cajun Navy stuff are just a bunch of cowboys, you know—good ole boys from Cajun country,” he explains. “They don’t realize that this organization, the Cajun Navy Relief that I’m a part of, is organized—that we’re doing FEMA courses, that we’re training ourselves, we’re bettering ourselves to be first responders to a FEMA standard, at least.”

This spring, Freethink traveled to Louisiana to watch the Cajun Navy’s first ever “Search And Rescue” games, which simulate disaster scenarios and allow volunteers to train ahead of this year’s hurricane season.

The accomplishments of Cajun Navy volunteers and their commitment to continual improvement show that you don’t need to wait until you’ve solved every problem to get involved and make a difference.

“The concept of civilian led rescue is a paradigm shift for how rescues are gonna be conducted from this point forward,” Shawn explains. “Civilians do have to step up and own the fact that they can make a difference, that they can do something and accomplish amazing things when they work together.”

And for Shawn and other volunteers, the motivation is clear. “When there’s lives on the line you can sit by and watch, or you can go do something,” he said simply. “We’re just ordinary people gettin’ the job done.”

Thankfully, forecasters are now predicting a lighter season of around four hurricanes, down from the seven that had been expected earlier in the year.

But no matter what happens, the men and women of the Cajun Navy will be ready.

Metaverse
Unreal Engine may power the metaverse
Epic’s popular Unreal Engine is on its fifth iteration, and the tools it contains may be especially helpful for metaverse developers.

AI
Minecraft’s urban planning AI could help design future cities
AIs design entire settlements in an annual Minecraft competition that could reveal uses for the tech in real-world urban planning.
Up Next 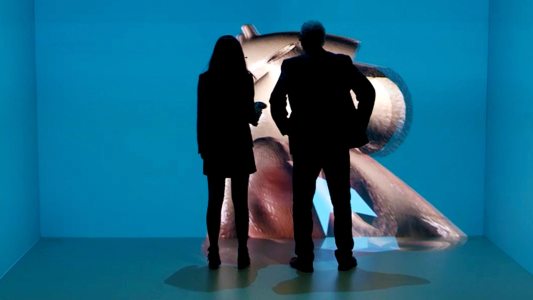 From virtual hearts to immersive battlefields, doctors and scientists are using virtual reality to transform medicine

Medicine
How virtual reality is changing medicine
Subscribe to Freethink for more great stories
Subscription Center
Challenges
Video
Freethink
Subscribe
We focus on solutions: the smartest people, the biggest ideas, and the most ground breaking technology shaping our future.
Subscribe