In 2012, Californians voted to amend the harsh three-strikes law that’s been on the books since 1994. Under this law, the state drastically increased the punishment for people with more than two convictions in the criminal justice system which mandated a minimum sentence of 25-years-to-life behind bars.

The 2012 amendment, however, put an important stipulation on this law by requiring that the third strike be a serious or violent felony. By doing so, not only did the voters ensure that future nonviolent third offenses would no longer lead to life sentences, but they also made about 3,000 people who were currently serving those life sentences eligible for release.

The Stanford Three Strikes Project and the Anti-Recidivism Coalition came together to form the ‘Ride Home Program’, an initiative that helps address the needs of these lifers who find themselves transitioning back to civilian society. This program sends drivers to pick up former inmates on their first day of freedom to help ensure a smooth transition in those first few critical hours. Carlos Cervantes, a former prisoner and a driver for the program, talks to Freethink about why this program is so important while he was driving a formerly incarcerated friend, Alex, to the DMV to conduct his driving test and get his license – one of the many ways the ride home program helps returning citizens transition.

Freethink: What is the Ride Home Program all about?

Carlos: A human connection. Stanford Professor Mike Romano helped get Proposition 36, the Three Strikes Reform Act passed in 2012 which eliminated life sentences for non-serious, non-violent crimes. You’re talking about somebody that stole a pair of pants, a pizza, somebody that had less than a gram of crack cocaine and under the Third Strike Act they would get 25 to life.

Once the reform act was passed and these lifers were released, Mike Romano thought, ‘how can we provide additional services to these individuals once they’re released?’ A lot of these people find out they’re getting out just two to three days before they’re released. The challenge is most people get accustomed to living inside of a prison cell and by the time they get out technology and the rest of the world has changed so they need comfort and support. That’s why the Ride Home Program was born. We pick up people from prison and are there to help them transition back to civilian society in those critical first hours upon release when those initial experiences can be overwhelming and confusing.

Freethink: Can you tell me about your transition experience and how do you help others navigate similar situations?

Carlos: I had been incarcerated since the age of 16. So, at age 27 I was looking at my life and saying, “What am I going to do? I’ve never had a driver’s license. I never had a job. I never paid rent or car notes. I never actually had responsibilities. I got really lucky and married my childhood friend while I was inside. And by the time I got out I had a baby girl that was two and a half years old. So I had to jump into a family.

When I was released, my wife and daughter were there for me. The first thing we did was go to a Starbucks and bought some coffee. Then we went to the DMV and I got my permit. And then I went to check in with my parole agent. So, those are the small, tangible things that need to happen but for someone who’s been locked up for years this can all be overwhelming. It’s not just about picking up people and taking them to a re-entry center or taking them home. It’s about giving them that human connection they haven’t had in years. I want to be that person to help them transition.

Freethink: So, how did that first cup of coffee taste?

Carlos: I had never been to a Starbucks before, so this is a stop I normally make with the individuals I drive. When they’re standing at the counter staring at all the options, not knowing what a venti or a grande or a frappuccino macchiato vanilla bean is, I’m just like ‘no matter what it is, grab it. It’s going to be the bomb, it’s going to change your life.’ Because just a few days ago, they thought they were going to continue drinking that stale coffee that they have inside. Because somehow, someway, everything becomes stale. Everything becomes stagnant. You’re supposed to die in prison. And now, you’re full of life again! You have a variety of flavors. You have people that are looking at you and greeting you as a human being.

Freethink: To be fair, those frappuccino choices are a little overwhelming for everyone. What’s a typical day for you when you’re on the road?

Carlos: We normally get up at 2 or 3 in the morning to drive 3 to 4 hours in the dark to get to the prison, where it’s isolated away from any kind of civilization, typically it’s in the middle of a desert.

And we use that time to prepare ourselves for that person. Because it’s no longer about us. Our whole goal is to take the individual to their next step as safely and smoothly as possible and provide for their most immediate needs and we get to have that first conversation with them on the outside. So during the time we’re in the car, we’re explaining our first day outside. We take them to a Target to buy hygiene products or their first set of clothing. New clothing that first day is important because we all feel like we have a stigma like everyone is watching us. In California, if you’re released from prison you’re wearing an all grey paper suit, or an all black paper suit if you’re getting out of jail. So we immediately take them to get new clothes. And then to get their favorite food or occasionally we take them to see their family. And we follow up with them after the ride home. We are basically their life coach, helping them get the vital documents they need or apply for jobs or school. These are people who are excited to rejoin the community and it’s those little, meaningful moments that really attracts them to continue their new path in life.

Freethink: How do you help an individual who is visibly upset by an experience?

Carlos: The big explosion is when we start going through a transition. For instance, getting into public transportation. They may start getting anxiety attacks because there’s so many people around them. Or when we go to Costco or supermarket and they don’t know how to swipe their debit card. We acknowledge those moments and just say, ‘Hey, I’m here for support. And it’s going to be fine. We’re going to get through this together.’

Freethink: What are you given when you’re released from prison?

Carlos: In California, they give you $200 on a debit card and then you get to keep whatever you had inside. Like, if you had toothpaste, toothbrush, you get to keep all that. But most of the people that get out, they don’t want any anything that was with them in prison. They kind of want to just disenfranchise themselves from that kind of living. So if I wasn’t picking you up, they’ll put you on a Greyhound bus where you have to find your way home. So, let’s imagine if you did 25 years. You’re getting out. You’re getting on the Greyhound. You’re going to, from maybe central California to where I’m at in Southern California. It’s going to be hard.

Freethink: How do people connect with you for a ride home?

Carlos: We want them to have had communication with us three to six months prior to getting out.

We want to start building that relationship from within. We want to start knowing what kind of resources they need. Where are they going? How are they going to get there? And another thing that’s important is that they have a re-entry plan. They have to build what their three to six months after prison looks like. Do they have any employment prospects? Do they want to go back to school? We need them to verbalize that to us. This will help us help them but also get them mentally prepared for re-entry. We typically have like I want to say it’s about 1,500 calls every day, from people that are inside.

Freethink: It sounds like you develop a special bond with the individuals you help.

Carlos: We become friends. We’re like, ‘hey that’s my homey.’ That’s somebody that I would do whatever’s necessary for that person to not only transition but after transitioning. We go out and have BBQ’s, we go play sports, watch games at Buffalo Wild Wings. I’ve seen people get married. I’ve seen people have kids. One of the guys that I was in juvenile hall with, and this is 20 years later, I’m going to be the godfather of his kid. For us, it becomes a family. And I can’t really define it any less than that. 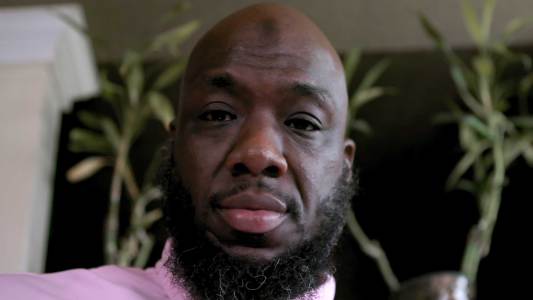 When a prisoner serving a life sentence is suddenly found to be innocent, it often makes national news. But what happens after the cameras go away?

Fixing Justice
24 years for a crime he didn’t commit5:23
Subscribe to Freethink for more great stories
Subscription Center
Sections
Video
Freethink
Subscribe
We focus on solutions: the smartest people, the biggest ideas, and the most ground breaking technology shaping our future.
Subscribe