With the Taliban now in control of Afghanistan, a New York-based human rights lawyer is trying desperately to have the nation’s all-girls robotics team evacuated to Canada.

“We are literally begging the Canadian government, we’re begging Prime Minister [Justin] Trudeau, who has been an amazing supporter of the Afghan girls robotics team, to please allow them to come to Canada,” Kimberley Motley told CBC News.

Women in Afghanistan: When the Taliban last ruled Afghanistan in the 1990s, women and girls were forbidden from voting, attending school, and working most jobs.

That situation changed following the U.S. invasion of the country in 2001. With the Taliban no longer in power, millions of Afghan girls began attending school, and by 2021, tens of thousands had even gone on to college.

“The team has helped the community believe in women’s abilities.”

The team, also known as the “Afghan Dreamers,” landed on the international stage competing in a robotics challenge in Washington D.C., after initially having their visas denied (then-President Donald Trump intervened to secure the girls’ entry into the U.S.).

Since then, the Afghan girls robotics team has entered and won other competitions and even designed a low-cost ventilator to help with the pandemic, all while inspiring other women and girls in their home nation.

“[The team has] helped the community believe in women’s abilities,” Mahboob told Fast Company in 2020. “Looking at these young teenagers, they give us hope for Afghanistan, that we are going in the right direction.”

The current situation: Any hope of a brighter future for Afghanistan’s women is now in jeopardy, as the Taliban has once again seized control of the nation following the withdrawal of U.S. troops.

In the past 10 days, an estimated 300,000 people have fled Afghanistan, and thousands are gathered at Kabul’s international airport in the hope of evacuating.

Some are running for their lives, as they would likely be killed by the Taliban for assisting the U.S. and its allies over the past two decades. Others are women and girls who fear being raped and forced into marriage under Taliban rule.

“There is a lot of fear among girls and women,” Rangina Hamidi, Afghanistan’s acting education minister, told NPR. “I have had many messages from my female family, friends calling me, asking me what I know and what they should expect. And I wish I had an answer for them.”

Oh, Canada: The 20 members of the Afghan girls robotics team are among those desperate to get out of the country now that the Taliban is once again in charge.

“Unfortunately, what’s been happening to little girls over this last week is that the Taliban has been literally going from door to door and literally taking girls out and forcing them to become child brides,” Motley said.

“[W]e are very, very concerned of that happening with this Afghan girls robotics team — these girls that want to be engineers, they want to be in the AI community, and they dare to dream to succeed,” she continued.

Canada has said it will take in 20,000 “especially vulnerable” Afghan refugees, including women leaders, but has yet to directly respond to Motley’s plea.

Editor’s Note, 8/19/21, 3:35 PM ET: Roya Mahboob has confirmed that some members of the team have arrived in Qatar, but others remain in Afghanistan. 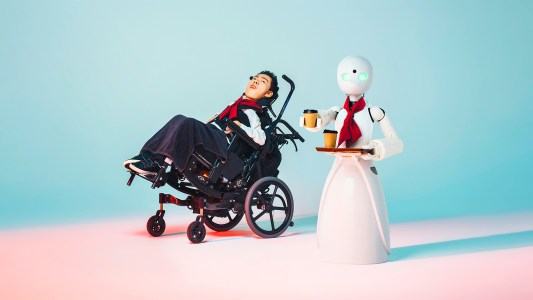 At the Dawn Avatar Robot Café in Tokyo, diners are served by robotic avatars controlled remotely by people with disabilities.