Fred Daniels has an entire world to manage — and currently, it’s a fairly ferocious one.

The leaden sky is mirrored in his shirt as he steps out into the driving rain and heads towards one of the hoop houses on the grounds of the Wood Street farm, one of two lots cultivated by Growing Home — a robust, roughly 1-acre urban farm in West Englewood on Chicago’s South Side. Each hoop house resembles a ribcage, the soft skin stretched between allowing for Daniels, Growing Home’s Director of Urban Farms, to control the weather — heat when it is cool; cool air when it is hot — and that skin, opaque with precipitation, is currently roaring inside, so that he must raise his voice to be heard by the production assistants he is guiding. With teams that can swell up to 40 production assistants, Daniels manages what is essentially a small company.

Weed, feed, till, rake, seed; as thunder shakes thoracic cavities and he pushes a hand tiller, a selachian rotation of teeth with a pair of velociraptor claws in the back, the dirt goes from turkey feather brown to rich mahogany, promise in the crevasse. Radishes have already leaked pathogens into the soil, and Daniels is replacing them with produce he knows will flourish in their wake — carrots, lettuce, beets. The world inside the hoop house is his to manage with the skills he has gained from Growing Home.

Daniels is a 2010 graduate of the Growing Home program and next year will mark a decade working the land he grew up just down the street from. Growing Home’s organic urban farms use agriculture as a vehicle for providing job training for people with employment barriers, whether due to prior convictions, like Daniels, or medical concerns, poverty, homelessness, or any other issues which make gainful employment difficult. Their priority is not in producing food — though their two farms do plenty of that, harvesting roughly 30,000 pounds a year —but in producing people with the skills they need to find jobs of their own.

“There’s a good amount of urban farming happening in this city and the country,” Chrissy Gargano, Growing Home’s Grants and Communications Coordinator, said by phone. “But something that makes Growing Home different is that job training side of things, which is the basis for why Growing Home exists.”

Growing Home’s program lasts 14 weeks. Participants, called production assistants, are paid workers who split their time between the farm and the classroom, where they learn not only employment techniques — resume writing, elevator pitching, interviewing — but also social skills through the TIP (Transferring Impossible to Possible) curriculum developed by Philip Hong at Loyola Chicago’s School of Social Work. Inside the classroom, TIP reminders like “HOW ARE YOU TIP’N’ TODAY?” hang from the walls, and a social worker is present in the classroom to help them implement these tips in their lives. The end result is Growing Home’s holistic job training approach, wherein business and social skills are intertwined.

The next step for the program is to grow — but to grow smart. Gargano and Executive Director Danielle Perry both attribute part of Growing Home’s success to the small group sizes of about 50 participants a year. This allows for a small staffer-to-production assistant ratio, ensuring that all participants get the attention they need.

Perry, who arrived in March, also wants to focus on providing more food to the Englewood neighborhood specifically. They’re building a new farm across the street from their Honore location. One hundred percent of the new farm’s produce will stay in the neighborhood. By forming relationships with church communities and local stores, Perry hopes to alleviate a barren food desert; this immense neighborhood is served by only two grocery stores.

In the din, Daniels shares his dream of buying a few acres and growing his own food; he’s got the skills, after all, and is a vegetarian anyway. In the meantime, he manages the farms and the people on them, helping to instill the same skills which turned his life around almost a decade ago.

“Growing food is one thing,” Daniels says. “But to me, the biggest impact is creating jobs in the community.”

And Daniels steps out into the storm. 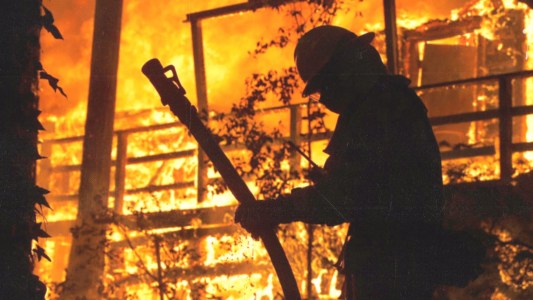 When facing literal hellfire, this community effort may be the only way to protect homes and lives from devastating wildfires.

Disaster Response
A community at the frontlines of the war on wildfire5:11
Subscribe to Freethink for more great stories
Subscription Center
Sections
Video
Freethink
Subscribe
We focus on solutions: the smartest people, the biggest ideas, and the most ground breaking technology shaping our future.
Subscribe