Pushing the falling Hubble Space Telescope into a higher, more stable orbit could extend its lifespan — and SpaceX wants to be the company to give Hubble a new lease on life.

The challenge: Since launching in 1990, Hubble has revolutionized astronomy, providing scientists with observations that have dramatically changed our understanding of the universe.

While the telescope was only expected to remain operational for 15 years, thanks to several servicing missions it’s still delivering new observations, including photos of the DART asteroid collision.

Since 2009, the Hubble Space Telescope has fallen about 18 miles.

Hubble is expected to keep operating well into the 2020s, but it could remain operational even longer — if not for the fact that it’s slowly falling toward Earth.

Since 2009, the telescope has fallen about 18 miles and is on pace to re-enter Earth’s atmosphere around the mid-to-late 2030s. That means NASA needs to purposefully deorbit it in the next decade or so to avoid a potentially dangerous uncontrolled entry.

What’s new? Earlier in 2022, SpaceX and the Polaris Program — a privately funded initiative focused on human spaceflight — proposed using one of SpaceX’s Dragon spacecraft to boost Hubble into a higher orbit.

NASA has now signed an agreement with SpaceX to explore the plan’s feasibility. The study is expected to take up to six months, and while NASA won’t be paying SpaceX for it, the agency will provide time with some of its experts.

Space boost: Hubble is about the size of a school bus, and when it needed to be serviced in the past, NASA astronauts could pull it into the (now-retired) Space Shuttle’s 60-foot cargo bay and then release the telescope at their desired orbit.

At just 8.1 meters (about 27 feet), SpaceX’s Dragon spacecraft are smaller than the telescope, so that approach won’t work — the company will need to think of a brand new way to boost Hubble.

“We’re going to be looking at Dragon capabilities and how they would need to be modified in order to safely rendezvous and dock with Hubble,” Jessica Jensen, SpaceX’s VP of customer operations and integration, said during a news conference.

“Details of exactly physically how that’s done and how we also safely do that from a trajectory point of view, that’s all to be worked out,” she continued.

Win/win: If SpaceX determines that it can safely dock with and boost Hubble, such a mission could add a decade or more onto the telescope’s life, giving scientists the opportunity to glean even more insights into our universe.

The feat would also prove that SpaceX is capable of repositioning large spacecraft. It could then confidently offer that service to customers in the growing space economy, while also implementing what it learns from the Hubble boost on its own missions.

“Missions such as servicing Hubble would help us expand space capabilities to ultimately help all of us achieve our goals of becoming a space-faring, multiplanetary civilization,” said Jensen. 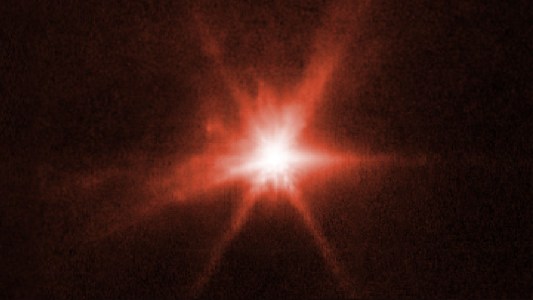 DART collision images captured by NASA’s Hubble and James Webb space telescopes show what happens when a spacecraft slams into an asteroid.