The collision: The purpose of DART was to test NASA’s planetary defense capabilities — if it could change the orbit of a non-threatening asteroid by slamming something into it, it might be able to use the same technique to redirect a space rock headed straight toward us.

Based on images taken by DART moments before impact, we do know for sure that the spacecraft hit its target. What we don’t know yet is if the collision changed the asteroid’s orbit or by how much — and that’s vital information.

“[T]hat can be a piece of the puzzle that informs how you would actually design a mission that was going to try to deflect something,” Carolyn Ernst, DART DRACO instrument scientist at Johns Hopkins APL, told ZDNET.

The aftermath: To determine how DART affected Dimorphos’ orbit — if at all — NASA will now spend 6 to 12 months studying data collected by dozens of telescopes trained on the asteroid at the time of the collision.

In addition to the many ground-based telescopes, NASA’s Hubble and James Webb space telescopes also imaged the impact, marking the first time the two iconic space observatories have imaged the same target at the same time.

Hubble’s view: A series of three images taken by Hubble after the collision show how DART ejected plumes of debris from the asteroid’s body.

“When I saw the data, I was literally speechless, stunned by the amazing detail of the ejecta that Hubble captured,” said Jian-Yang Li, who led the Hubble observations at the Planetary Science Institute. “I feel lucky to witness this moment and be part of the team that made this happen.”

Webb’s perspective: Ejecta from Dimorphos can also be seen in a timelapse animation featuring DART collision images captured by Webb just prior to the impact and up to 5 hours after.

“We have been planning these observations for years, then in detail for weeks, and I’m tremendously happy this has come to fruition,” said Cristina Thomas, leader of the DART Observations Working Group.

Next steps: Hubble is expected to monitor Dimorphos 10 more times over the next few weeks, and two instruments on Webb —  the Mid-Infrared Instrument (MIRI) and the Near-Infrared Spectrograph (NIRSpec) — will be used to observe it in the coming months.

These observations are expected to help scientists better understand the surface of Dimorphos, and figure out how much material the DART collision dislodged and at what speed it was ejected from the asteroid.

“Combining this information, along with ground-based telescope observations, will help scientists to understand how effectively a kinetic impact can modify an asteroid’s orbit,” NASA wrote in a press release. 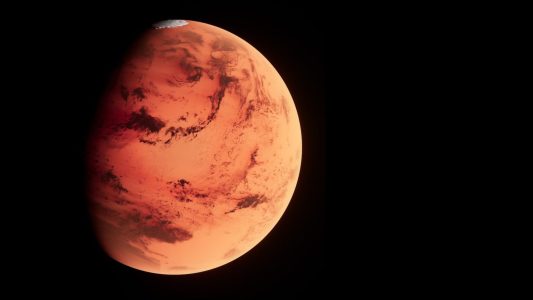 Scientists trained a neural network to predict the movements of Mars and the Sun, which placed the Sun at the center of our solar system.

Physics
A neural network discovered Copernicus’ heliocentricity on its own
Subscribe to Freethink for more great stories
Subscription Center
Sections
Video
Freethink
Subscribe
We focus on solutions: the smartest people, the biggest ideas, and the most ground breaking technology shaping our future.
Subscribe