We’ll have to capture more carbon dioxide that’s being emitted into the atmosphere to have any shot of meeting the world’s climate targets, the International Energy Agency declared in September.

We’ve got a lot of hurdles to overcome if carbon capture is going to make a dent in climate change. Carbon capture technology is still in its infancy, and it’s pretty controversial. While the benefits are clear if it works, critics say it’s too much of a gamble — it’s egregiously expensive and therefore impractical.

There are two main ways you can capture carbon dioxide: sucking it directly out of the atmosphere or capturing it right at the emission source — power plants, factories, transportation, etc. After you capture it, you then have to store it somewhere so it won’t leak back into the atmosphere.

Direct air capture could play a long-term role in reducing the overall CO2 level already in the atmosphere while capturing it at the source reduces the amount of CO2 that is currently being added to it.

Either way, there are several techniques to grab CO2, but they all work off the same chemistry concept: CO2 sticks to certain chemicals like glue.

For example, a coal power plant in Canada takes the byproducts of burning coal — water vapor and gas — and mixes it with a liquid similar to ammonia. The CO2 adheres to the liquid while the other gases are released into the atmosphere. Then, the liquid mixture is heated, which releases pure CO2.

That carbon dioxide is then trapped and liquified, where it can be reused or pumped underground.

What Do We Do With the Captured Carbon?

This is the kicker — while the technology works (there are 19 large-scale facilities around the world that capture CO2 at the source), it hasn’t yet proven feasible because there’s not a large enough market for captured CO2 to justify the huge cost.

So far, the carbon capture industry is experimenting with different markets. Some companies are turning the CO2 into jet fuel, selling it to soda companies, or even (ironically) selling it to oil and gas companies, which can pump the CO2 back into wells to help loosen and extract more fossil fuels.

What if instead of burying the CO2 or transforming it into jet fuel — we lived in it?

But what if instead of burying the CO2 or transforming it into jet fuel — we lived in it?

The problem lies in the production of the cement — a key ingredient that binds together all the materials that form concrete. Limestone and other materials for cement have to be melted together at extremely high temperatures, which means burning a ton of fossil fuels. (Electricity, whether from clean power sources or otherwise, just isn’t powerful enough to get the job done.)

The chemical process itself compounds the problem — mixing limestone with a binder material sets off a chemical reaction that releases carbon dioxide into the atmosphere.

Part of the Solution

CarbonCure Technologies, a Canadian startup, is looking to make the concrete industry greener by changing the chemical makeup of concrete. Their process is simple and reduces the amount of cement in construction — while providing a market for captured carbon. Win-win.

If the building made with CarbonCure concrete is ever torn down, that carbon remains in a solid form — so there’s never a risk of releasing it back into the atmosphere.

CarbonCure has created a nifty system that allows existing concrete producers to easily use this method at their plants. “The whole system fits in a crate,” founder Robert Niven told Wired. “It takes a single day to set up and it’s universally applicable to any concrete plant in the world.”

So far, the CarbonCure’s technology is installed in 225 concrete plants in the U.S. However, at the moment it only has a net carbon reduction of around 5-7%. Hardly enough to make a dent in the fight against climate change.

The good thing is they’re just getting started — and they’re not the only ones thinking about how to make cleaner concrete:

Blue Planet, a startup in California, is using captured carbon to make synthetic limestone to replace the sand and gravel in the concrete.  Carbon Upcycling Technologies uses gaseous CO2 combined with fly ash — a byproduct from coal power plants — to create a mixture that reduces the cement needed for concrete by 20% — and Rice University researchers are developing a fly ash mix that uses no cement at all.

The concrete industry is notoriously hard to change — after all, when the end product is a bridge or office building, you probably aren’t too keen on taking chances and trying new things. But these startups are generating a lot of interest in the industry, which hopefully points to a new market for captured carbon dioxide — and greener buildings in the future. 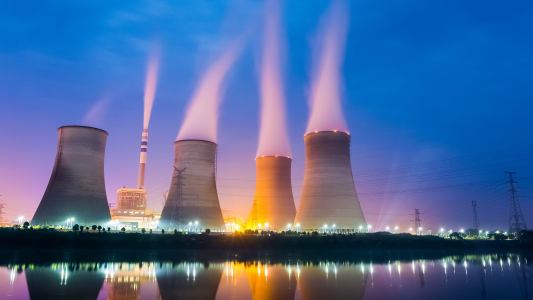 The Department of Energy is putting millions behind two new nuclear plant prototypes.