If a giant asteroid were to slam into Earth, well, we’d be in trouble.

That’s why NASA is launching the world’s first planetary defense spacecraft. The plan is for it to spend less than a year in space and then slam into Dimorphos, a small moon that orbits the larger asteroid called Didymos.

If the mission is successful, it will give NASA scientists much-needed data about how we could deflect space rocks in case our planet is ever in real danger.

DART will launch on a SpaceX Falcon 9 rocket no earlier than 1:20 am EST on November 24 from Vandenberg Space Force Base in California. NASA Television will livestream the event.

How it works: The $330 million spacecraft, called DART (Double Asteroid Redirection Test), is scheduled to launch on November 23.

There’s a few ways to deflect an asteroid, but this mission is trying out the “kinetic impactor technique” — which really just means, “can we slam into an asteroid with a big enough object at a fast enough speed to change its path?”

The goal isn’t to dramatically obliterate the space rock, Armageddon-style — rather, DART is looking to give the rock a little nudge to slightly alter its course. If we ever spotted a dangerous asteroid in our path, this nudge would need to happen decades before its expected collision.

“That’s enough time to make sure it misses Earth,” Andrew Rivkin, a planetary astronomer at the Johns Hopkins University Applied Physics Laboratory and one of DART’s lead scientists, told Mashable. Over the years, that tiny alteration will add up to a big redirection.

The target: About 6.8 million miles from Earth, DART is expected to collide with Dimorphos sometime in October 2022, hitting the rock with about 550 kilograms (about 1,210 pounds).

Dimorphos is not a threat to Earth and will never be, but its size and location make it a perfect test target to measure how much of an impact a relatively small spacecraft like DART can have on a rock like Dimorphos. It’s about the size of the Great Pyramid in Egypt — and although that sounds massive to us, it’s actually considered “medium” when it comes to space rocks.

The big asteroids — categorized as wider than 1 kilometer (or 3,300 feet), according to Space.com — could clearly cause the most damage if they ever hit Earth. But they’re also really easy to spot, so scientists are confident that they’ve already spotted over 90% of them.

The small ones are very hard to detect, but they’re small, so they don’t pose a major risk to Earth.

About 6.8 million miles from Earth, DART is expected to collide with Dimorphos sometime in October 2022.

It’s the mid-sized asteroids that planetary scientists are concerned about. They’re harder to spot than the massive rocks and could cause severe, catastrophic damage if one ever hit Earth.

A mid-sized asteroid passed by Earth in 2019 — and scientists were caught off guard.

“Nothing this size is easy to detect,” Alan Duffy, lead scientist at the Royal Institution of Australia, told the Washington Post in 2019.

″You’re really relying on reflected sunlight, and even at closest approach it was barely visible with a pair of binoculars.”

But if it had hit Earth, it could have caused massive local damage — Duffy calls these mid-sized asteroids “city killers”.

“It would have gone off like a very large nuclear weapon,” he said.

“Many megatons, perhaps in the ballpark of 10 megatons of TNT, so something not to be messed with.”

Detection: While scientists say that thousands of mid-sized asteroids remain undiscovered, the good news is, there is a network of telescopes and space programs around the world currently on the lookout. Together, they’ve discovered over 27,000 near-Earth asteroids since the 1990s, and that number is increasing every month.

“We need to be able to find these things early,” said Cathy Plesko, a scientist at Los Alamos National Laboratory who is working on the DART mission.

“We’re getting there, but we’re not there yet.”

For example, there could be partial deflection — we move the asteroid, but not far enough to clear Earth…but now we don’t know exactly where it’s heading.

“It’s still heading toward the Earth, but now the impact point is somewhere other than where it was before,” Brent Barbee, an aerospace engineer at NASA’s Goddard Space Flight Center in Maryland told Space.com.

“Now we’ve artificially created a different version of the disaster, different from what the natural version was going to be.”

Or, the spacecraft isn’t heavy enough to move the asteroid, but instead just breaks off a piece of it.

“It’s plausible that you could inadvertently break off a chunk of the asteroid when you hit it rather than just deflecting it as a whole unbroken object,” Barbee said. This space debris could pose a threat to Earth’s satellites, although it won’t be as destructive to people on the ground.

Ideally, Barbee tells Space.com, you’d have a second spacecraft that goes up a few weeks later to assess the impact of the first and see if any follow-up action is needed.

There will be a follow-up mission to the DART mission, Hera, by the European Space Agency in 2024. This mission will assess the aftermath of DART and will help scientists determine the next steps in creating a planetary defense strategy that we hope we’ll never have to use. 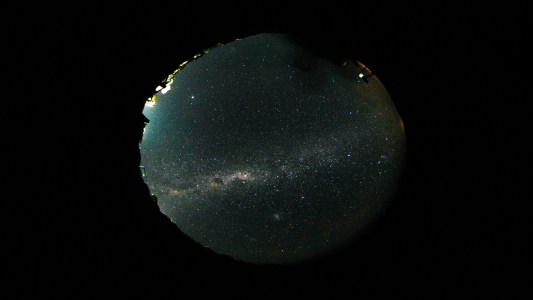 Astronomers just discovered a black hole of a mass comparable to the Sun.It is small and not so far away, which opens the window to new discoveries.