By slamming a spacecraft into the asteroid Dimorphos, NASA changed the rock’s trajectory significantly — a huge win for efforts to protect Earth from potentially deadly asteroid impacts.

“This mission shows that NASA is trying to be ready for whatever the universe throws at us,” said NASA Administrator Bill Nelson. “NASA has proven we are serious as a defender of the planet.”

The impact: When NASA’s Double Asteroid Redirection Test (DART) spacecraft slammed into Dimorphos on September 26, it proved that the agency could aim a small spacecraft, traveling over 14,000 miles per hour, with enough precision to hit a 530-foot object 7 million miles from Earth.

That’s impressive. But simply hitting Dimorphos wasn’t the goal — NASA wanted to show that it could redirect an asteroid in case one of significant size is ever poised to collide with Earth.

What’s new? NASA expected the DART impact to shorten Dimorphos’ orbit around a larger asteroid, Didymos, by about 10 minutes. If its nearly 12-hour orbit was shortened by even 73 seconds, though, the mission would be considered a success — with enough lead time, even a tiny turn could steer an asteroid away from Earth.

Using data from telescopes in space and on the ground, NASA has now confirmed that DART didn’t just move Dimorphos, it surpassed the minimum benchmark for success by more than 25 times, shortening the asteroid’s orbit around Didymos by 32 minutes.

The debris dislodged by the impact, which can be seen stretching over 6,000 miles into space in a newly shared image captured by the SOAR Telescope in Chile, likely played a role in DART’s overachieving.

“The recoil from this blast of debris substantially enhanced DART’s push against Dimorphos — a little like a jet of air streaming out of a balloon sends the balloon in the opposite direction,” wrote NASA.

Looking ahead: NASA plans to use data from telescopes and LICIACube, a small Italian Space Agency satellite DART released 15 days prior to impact, to continue studying the role of the ejected debris in the mission’s success.

In 2026, the European Space Agency’s Hera probe is expected to reach Dimorphos. Once there, it’ll conduct detailed surveys of both Dimorphos and Didymos that NASA will use to further develop its planetary defense technologies.

“We should not be too eager to say one test on one asteroid tells us exactly how every other asteroid would behave in a similar situation,” Tom Statler, NASA’s DART program scientist, said during a press briefing.

“But what we can do is use this test as an anchor point for our physics calculations in our simulations that tell us how different kinds of impacts in different situations should behave,” he continued. 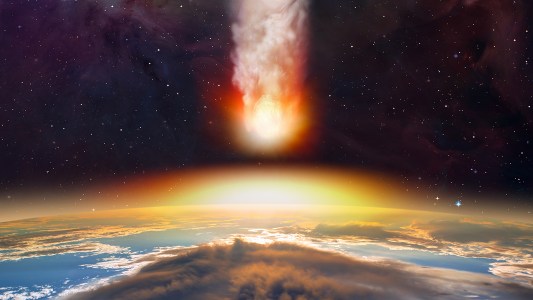 NASA’s planetary defense researchers are tracking potentially hazardous objects in space and developing tech to destroy or deflect them.