Every year, scientists discover thousands of new species on Earth — everything from monkeys to microbes.

Now, astronauts have discovered a new species of bacteria in space — and scientists think the bugs could one day help people grow plants on Mars.

Can We Grow Plants on Mars?

One day’s worth of meals for an astronaut aboard the International Space Station (ISS) weighs about 5.5 pounds, and those explorers never have to worry about running out of food — the ISS is close enough to Earth that regular resupply missions are simple (if not cheap).

They wouldn’t be so simple for Mars missions, though.

Every extra pound of payload increases the cost of a Mars mission by at least $2,400. That means just one day’s worth of food for just one Mars astronaut could cost more than $10,000 in transportation fees.

Food also takes up room, which is precious on a spacecraft — every meal sent to Mars would occupy space that could be dedicated to equipment and experiments. NASA estimates a Mars mission could take three years, meaning a four-person crew would have to carry along at least 24,000 pounds of food.

Still, astronauts have to eat, so NASA has been looking for ways for them to grow plants on Mars to supplement their diets.

“If we’re going to start exploring and start becoming more Earth-independent, we need to start understanding how we produce the foods and not just take foods with us,” Grace Douglas, lead scientist for NASA’s Advanced Food Technology division, said during an episode of a NASA podcast.

These newly discovered bacteria could help.

Bacteria can be found nearly everywhere on Earth — even on and in you. Some are harmful to other lifeforms, but many are helpful — the ones that live in our guts can keep us healthy, and certain soil-dwelling bacteria can help plants grow.

Several years ago, astronauts began swabbing different parts of the ISS to see what types of bacteria might be living with them in space.

After analyzing some of those swabs, researchers working with NASA discovered four strains of bacteria, each collected from a different location on the ISS.

Helpful microbes are essential for growing plants in extreme places with minimal resources.

One of the strains was already known to exist on Earth: Methylorubrum rhodesianum. The other three, however, had never been seen before.

The researchers have proposed naming the new species containing those three strains Methylobacterium ajmalii, in honor of the Indian biodiversity scientist Ajmal Khan.

As for how the bacteria ended up on the ISS, this wasn’t an example of alien life infiltrating a human spacecraft — the bugs were simply stowaways.

“All microbes in the ISS stem from Earth,” microbiologist Christine Moissl-Eichinger, who wasn’t involved with the study, told the Guardian. “There are astronauts, and cargo is exchanged all the time. None of these items are completely sterile.”

Genetically, all four strains discovered on the ISS fall under the genus Methylobacterium, and species in that genus are known to protect plants from diseases and help them grow.

The fact that these four particular strains were found on the ISS suggests that they’re already resilient enough to survive in space — and that could make them useful to astronauts attempting to grow plants on Mars.

“To grow plants in extreme places where resources are minimal, isolation of novel microbes that help to promote plant growth under stressful conditions is essential,” researchers Kasthuri Venkateswaran and Nitin Kumar Singh said in a press release.

Right now, though, the theory that these bacteria could help grow plants on Mars is just that: a theory.

Someone will need to conduct experiments to see whether they can actually provide a bacterial boost to plants under Mars-like conditions. If so, the microbes might one day help feed our astronauts on the Red Planet. 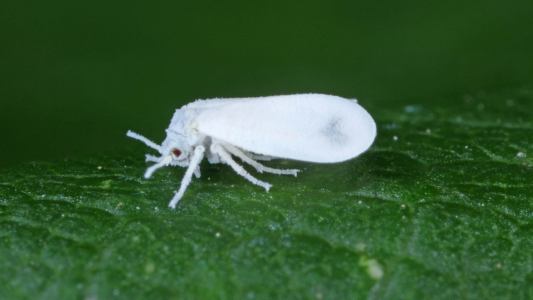 A plant gene has been discovered in whiteflies, marking the first known example of horizontal gene transfer of a functional gene between plants and insects.

Genetics
This insect swiped a gene from plants to help itself survive
By Kristin Houser
Subscribe to Freethink for more great stories
Subscription Center
Sections
Video
Freethink
Subscribe
We focus on solutions: the smartest people, the biggest ideas, and the most ground breaking technology shaping our future.
Subscribe