It took almost a decade for NASA’s New Horizons spacecraft to navigate its way across the solar system to start taking and transmitting dramatic closeup photos of the dwarf planet Pluto. Another three and a half years passed before New Horizons performed the furthest flyby in history, zooming past a Kuiper Belt object nicknamed Ultima Thule. Initially turning funding into the reality of a launch involved another five years before all that. Was it worth the wait? One team member calls it “a once-in-a-lifetime opportunity” to participate in “a history-making event,” so apparently it was.

Lurking behind the scientific excitement are questions about the nature of work that involves goals with very long time horizons, goals that may never be reached in one person’s working lifetime. A Washington Post profile of New Horizons scientist Andy Cheng reminded us that life happened during the long wait. As New Horizons made its three-billion-mile way through the solar system, Cheng’s kids grew up, his father and a brother died, a daughter married, hair thinned, health changed.

What’s it like to do the kind of work in which the time horizon to accomplishment is so vast? Here’s what Cheng told the Post: “You just have to teach yourself: Wait. Just wait. Be patient. It’s a very long time.” Indeed it is. So how do people who thrive in these settings stay motivated?

Patience is, as they say, a virtue, and we admire Andy Cheng’s copious reserves of it, but we suspect there’s more to it than that. The pursuit of long-term goals poses challenges relevant to professionals in a variety of work settings, not just space scientists on a Pluto mission. Many lines of work involve balancing short-term demands with long-run hopes and strategies, and the tension between the two has a lengthy provenance in the study of management among both academics and practitioners.

Much is known about the psychology of goals: decades of research have shed light on how and why goals motivate task performance in all sorts of settings. We know, for instance, that specific, challenging and attainable goals motivate in the short run, and we know that short-term goals are more motivating than long-term goals. Very little of this work, however, looks at goals and motivation beyond short time spans.

Until, that is, our research on how people stay motivated when goals take not just years but decades to reach. We interviewed professionals (researchers as well as administrators) in various fields – biomedical science, nanotechnology, astronomy, biodiversity and others – whose work meets three criteria: goals with decades-long time horizons, very slow progress along the way and significant chance of failure.

A complex stew of motivation

We learned from our data that people mine several sources of motivation that sustain them for the long haul, some rooted in what is going on in the present, and some located in thoughts about the future.

In their present circumstances, people who persevere are deeply interested in their work, exploiting opportunities to apply their expertise, acquire knowledge, and make intermediate discoveries along the way. A learning mindset is crucial, because orienting oneself solely toward accomplishing the task leads people to avoid or give up on difficult goals when performance payoffs don’t materialize quickly. Long-run motivation is also juiced by perceptions that the work alongside the waiting is challenging, risky, surprising and fun. Social and professional cachet matters as well: gaining recognition from peers, working with prestigious others, being first to the goal and ultimately having a chance to prove skeptics wrong.

In terms of the future, individuals pursuing very long-term goals sustain motivation by envisioning possible futures that result from the work they are doing. This can include not just contributions to their professional or scientific disciplines, but broader impacts on people, societies and future generations.

People find additional motivation by invoking symbols, metaphors and historical allegories to give life to these envisioned futures. The people in our study spoke of moon landings, the Wright Brothers, climbing Mount Everest and “doing it the same way Darwin did.”

They envision not only impacts on others, but a sense of how they themselves may be changed by pursuit of the goal. These “possible selves,” as we label them, are motivated by the prospect of finding new truths, having their beliefs confirmed, overcoming obstacles and becoming known for seizing rare opportunities.

Just as persistence isn’t everything, neither is money. Pecuniary rewards do motivate, of course, and the long-term goal pursuers we spoke with did mention dreams of a big payoff down the road. But the more common and emphatic observation we heard is the belief that they could make more money doing other things – a sense of sacrifice in the name of the goal. Psychological rewards are the important currency along the way, with a marked tolerance for uncertainty regarding more tangible payoffs down the road.

Binding together these various forms of motivation is what psychologists call self-regulation – the processes through which we manage our own actions, thoughts and emotions. Research highlights several ways this happens: balancing multiple goals, avoiding distractions, keeping emotions in check, being receptive to feedback, coping with failure, rebounding from disappointments.

Being good at a job involving long time horizons is not just about being good at waiting; it’s about finding sources of motivation in the present you’re living as well as the future you’re envisioning, with advanced skills of self-awareness and self-regulation thrown into the mix.

The New Horizons mission is a compelling reminder that ambitious goals with extended time horizons are reachable when talented people find ways to stay motivated for the long haul. These are skills one can cultivate – and there’s a bit of irony in the fact that long-term pursuits do afford time to get better at it.

Masters of the long haul mark time not with superhuman patience, but with a variety of strategies that merge the journey with the destination. The long haul doesn’t feel so long when one is fully engaged. As one of the scientists we interviewed in our study observed, “Five years is the blink of an eye.”

Leadership
Babble hypothesis shows key factor to becoming a leader
Researchers show that intelligence is not the most important factor in leadership, simply talking the most is.
By Paul Ratner

Leadership
The key to good teamwork
4:27
The coronavirus pandemic is forcing more teams to figure out how to collaborate while working from home. This team-building tool helps people with different communication styles get on the same page.

Education
How to drive student engagement? Unleash a swarm.
11:57
Our favorite principal, Hamish Brewer, is up to something new this school year. Just like Hogwarts, his school is adopting the traditional house system to improve academic performance, student engagement, and behavior.

Startups
Disrupting the fear of failure
6:02
Failure is a universal experience, yet the stigma attached to it undermines our ability to talk about it openly and honestly. One provocatively named organization, F*ckup Nights, is hoping to turn the tide.
Up Next 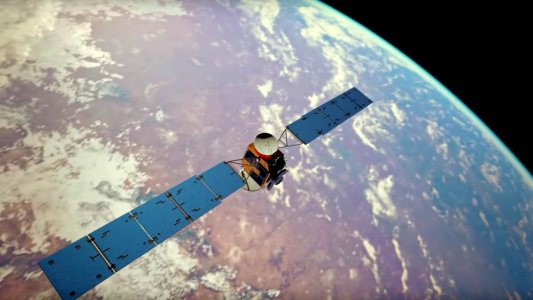 A $130 million satellite vanished. Over a decade later, a blogger/astronomer found it.