That may sound impossible, but their proposal utilizes technology that is now available. They believe that sending spacecraft — and even living creatures — to another star is actually within reach.

Scientists at the University of California, Santa Barbara (UCSB) have laid out a plan to make it happen. For such a big journey, they want to start small, sending miniature earthlings to the closest stars to test the limitations of interstellar travel.

Thinking small to travel big: The star closest to the sun is Proxima Centauri, at a distance of about 4.2 light-years. Since 2016, two planets have been found orbiting it, but astronomers recently observed a wobble in its position signifying a third planet orbiting the star.

“Most experiments that can be conducted on these animals in a lab can be performed onboard the StarChips as they whiz through the cosmos.”

NASA’s Voyager missions have already sent car-sized probes beyond the heliosphere — the protective bubble created by our sun — 12 billion miles away. And it only took them 40 years to do it. But at that rate, reaching the nearest star — something like 25 trillion miles away — would take 80,000 years.

Ruling out onboard chemical propulsion, like rocket fuel, because it is too slow, the team knew they needed to develop a new propellant. They landed on light, reports EarthSky.

The duo hopes to employ a laser device on Earth to use light to push tiny wafer-like probes, plans detailed in the journal Acta Astronautica. A powerful laser on Earth or the moon could aim at a “solar sail,” which would propel the craft like a blast of wind, accelerating the tiny probes to as much as 20-30% of the speed of light, reports ZME Science.

The team plans to equip the tiny wafers, called StarChips, with onboard instrumentation — mini probes with instruments that detect, gather, and send data back to Earth.

“It would probably look like a semiconductor wafer with an edge to protect it from the radiation and dust bombardment as it goes through the interstellar medium,” Lubin said. “It would probably be the size of your hand to start with.”

Lubin says the interstellar travel program could evolve, and the wafer spaceship could get bigger in time.

The lucky space traveler: The team chose C. elegans and tardigrades to be the test passengers  aboard the flying wafters.

C. elegans, or roundworms, are already veteran space travelers, having been the subject of studies done aboard the International Space Station and on the Space Shuttle. The tiny creatures have a special knack for space travel. They can be put into a state of suspended animation, in which almost all metabolic functions are halted.

Thousands of these microscopic animals could be flown on the wafer in suspended animation, directly to their interstellar travel destination — all while being monitored for impacts on their biology, with results beamed back to Earth.

“We can ask how well they remember trained behavior when they’re flying away from their earthly origin at near the speed of light, and examine their metabolism, physiology, neurological function, reproduction and aging,” Rothman, the biologist, added. “Most experiments that can be conducted on these animals in a lab can be performed onboard the StarChips as they whiz through the cosmos.”

Studying animal biology as they fly through space could give insight into future human space travel.

A StarChip astronaut reality show anyone?

Why boldly go there? “I think it’s our destiny to keep exploring,” Rothman said in a statement. “Look at the history of the human species. We explore at smaller and smaller levels down to subatomic levels and we also explore at increasingly larger scales. Such drive toward ceaseless exploration lies at the core of who we are as a species.” 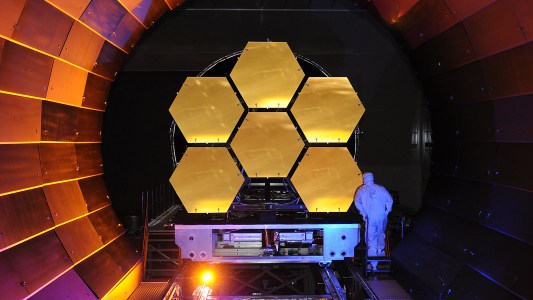 NASA has shared the James Webb Space Telescope’s first images, and so far, it looks like the epic spacecraft is working exactly as hoped.