NASA has just shared the first images captured by the James Webb Space Telescope (Webb) — and it looks like the epic spacecraft is working exactly as hoped.

The challenge: NASA started developing Webb in 1996, with plans to launch it in 2007 — but due to budget overruns, technical issues, and more, the telescope didn’t end up launching until December 25, 2021.

With that hurdle finally surmounted, NASA is now focusing on getting the telescope to take pictures in space.

To make that happen, Webb’s 18 hexagonal mirror segments need to be perfectly aligned — that means NASA needs to adjust the angle of each segment until the group is operating as a single, smooth 21-foot-wide mirror.

Align ‘em up: To start the alignment, NASA had Webb take 1,560 images of the space around one target star (HD 84406), repositioning the telescope more than 150 times during the day-long process. It then pieced the images together into a mosaic of the sky.

“We know that the primary mirror segments aren’t aligned, so they actually act like 18 separate telescopes,” Lee Feinberg, Webb optical telescope element manager, said. “We expect to see 18 separate images [of the star], one for each mirror, that are a little bit blurry at this point because we haven’t aligned or focused anything.”

Not only did NASA see those 18 blurry spots in the image, it was also happy to find that they were relatively close together — a sign that they’re starting from a good position with the alignment.

NASA was also happy to find that a special “selfie” lens on the telescope appears to be working as hoped — this lens captures photos of Webb’s mirror segments to help NASA with the alignment process and other engineering work.

Looking ahead: NASA has already matched each spot in the mosaic to the exact mirror segment that captured it. It can now begin the 3-month-long alignment process, and once that’s done, all 18 mirrors will work as one, focusing on light coming from the same spot in the sky.

This will allow Webb to take images of objects so far away, they show us what the universe was like when the first galaxies were forming. 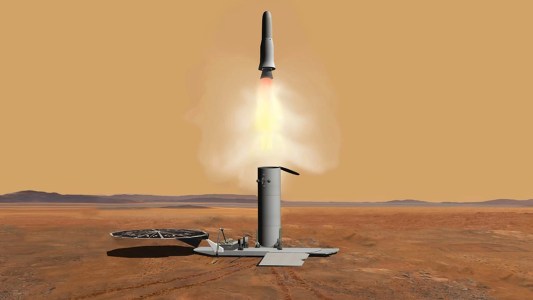 NASA’s Mars Ascent Vehicle, a first-of-its-kind rocket capable of launching from the surface of Mars, will be built by Lockheed Martin.