The next space station will get a boost from ion thrusters — the first time astronauts have flown using the sci-fi-sounding engines.

Although ion propulsion systems have been used on satellites since the 1970s, no one has ever used one for a crewed spacecraft until now.

If the technology is able to prove itself safe and reliable on this larger scale, it could one day be used for interplanetary travel, cutting the time it takes astronauts to reach Mars down from eight months to as little as 39 days — and opening the door to missions to places even farther away.

The challenge: Spacecraft move by producing thrust; the easiest way to think about it is to consider a balloon filled with air — release the nozzle and the air quickly exits the balloon, sending it flying in the opposite direction.

Most spacecraft produce this thrust by burning fuel. That creates gas the craft can expel, pushing it in the opposite direction. This process can produce a lot of thrust, which is ideal for when a rocket is lifting off and needs to escape Earth’s gravity.

The problem is that fuel is heavy, and the longer the mission, the more fuel required. That makes the craft heavier, which means more fuel is required to lift it into space to begin with — and the cost of all that fuel makes missions more expensive.

Ion propulsion is more fuel efficient, but it produces much less thrust than chemical engines.

How it works: Ion propulsion systems produce thrust by stripping electrons from atoms, and then using electricity to send those atoms — which are now positively charged ions — flying out the back of a spacecraft at incredibly fast speeds.

The electricity for an ion thruster can be generated from solar panels on the spacecraft. The atoms, meanwhile, are pulled from inert gases, such as xenon, which are far lighter than traditional liquid or solid rocket fuels.

“You can think of electric propulsion as having 10 times the miles per gallon compared to chemical propulsion,” Alec Gallimore, who led the development of the record-breaking X3 ion thruster, told Space.com in 2017.

But while ion propulsion is more fuel efficient, it also produces much less thrust.

Gallimore’s system won acclaim for producing 5.4 Newtons of thrust — more than any other ion engine. Imagine how much force it takes to hold up a basketball with your hand, and you’ll get an idea of how little thrust 5.4 Newtons will give you.

Ion propulsion: The amount of thrust produced by ion engines could never send a rocket flying through the atmosphere, let alone break free from Earth’s gravity, but in space, with no air resistance and little gravity, it is enough to push a spacecraft in whatever direction it needs to go.

For that reason, ion thrusters are regularly used to control satellites in lieu of more expensive chemical propulsion systems. They’re also used for long missions into deep space because, again, they’re cheaper, and if given enough time to accelerate, they can propel spacecraft to speeds five times faster than chemical systems, which have to conserve their fuel or run out.

Ion propulsion could one day make it possible for astronauts to reach Mars in 39 days.

A world first: Ion propulsion systems aren’t used for crewed missions, though, because the particles leaving them are extremely hot. That can cause damage to the engine that might put astronauts’ lives at risk.

But the Chinese Academy of Sciences has now told the South China Morning Post that Chinese scientists have developed an ion thruster that’s safe and reliable enough for crewed missions. During testing, it was reportedly able to fire continuously for more than 11 months, thanks to a custom ceramic material and a precisely placed protective magnetic field.

The inclusion of an ion propulsion system in a long-running, Earth-orbiting space station will give researchers a chance to test out the tech while astronauts are still close to home — and if it works as hoped, it could one day ferry explorers to Mars and even more distant destinations. 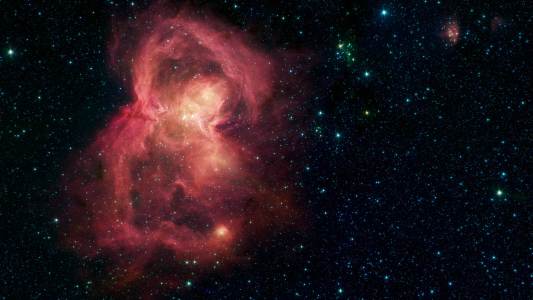 The biggest survey of stellar nurseries to date, PHANGS-ALMA, charts more than 100,000 star formation regions across our corner of the universe.