NASA has given UC Berkeley and space systems manufacturer Rocket Lab the go-ahead to start preparing a pair of tiny Mars satellites for launch.

“We are thrilled to pass this critical milestone, the culmination of two years of science and engineering work from a talented and dedicated team at UC Berkeley and our partners,”  mission leader Rob Lillis said in a press release.

The challenge: NASA regularly spends more than a decade and $1 billion planning and executing its missions to other planets.

That hefty commitment increases each mission’s chance of success, but it also means NASA can only support a limited number of projects at any one time.

The goal of the program is to see if NASA can gather worthwhile data on other planets using smaller, cheaper spacecraft — and UC Berkeley’s Escape and Plasma Acceleration and Dynamics Explorers (ESCAPADE) mission was one of the three proposals to make the cut.

“Instead of spending $800 million for a 95% chance of success, can we spend $80 million for an 80% chance?” Lillis said. “This is what NASA is trying to find out with these missions, and we are lucky to be one of the guinea pigs.”

Twin Mars satellites: ESCAPADE will attempt to put two small satellites in orbit around Mars, where they’ll collect data that could help piece together the planet’s climate history.

“ESCAPADE will bring us the first ‘stereo’ picture of this highly dynamic plasma environment.”

The Mars satellites will also study the Red Planet’s magnetic field and upper atmosphere, which is electrically charged and could affect our ability to communicate with astronauts living on Mars.

“ESCAPADE will bring us the first ‘stereo’ picture of this highly dynamic plasma environment,” Lillis said.

Rocket Lab’s role: UC Berkeley has spent the past two years designing, building, and testing the Mars satellites, and in June, it awarded Rocket Lab a contract to build their platforms.

These platforms will be based on Rocket Lab’s existing Photon spacecraft, and their job will be to get the satellites to Mars (after they’re deposited into space by a commercial rocket) and control their navigation in orbit.

Looking ahead: ESCAPADE’s launch is currently set for October 2024, and the Mars satellites should reach their destination about 11 months later — if everything goes to plan.

“Sending two spacecraft to Mars for the total cost of under $80 million is just unheard of,” Lillis said, “but current NASA leadership is taking the risk.”

If it works, this model may give space exploration a massive boost, multiplying potential missions to Mars and beyond. 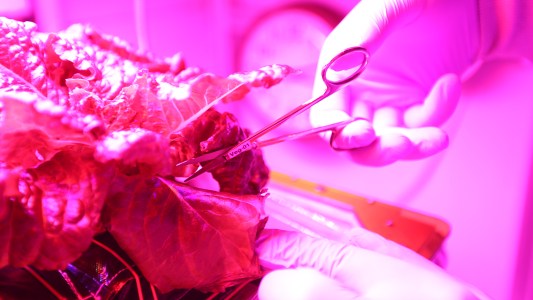 Researchers created a mini radioactive sky on Earth to study how cosmic radiation might impact how astronauts on Mars grow food.