To study the potential impact of cosmic radiation on Martian crops, Dutch researchers created a miniature radioactive sky and grew plants under it.

“Radiation is a problem, but it’s solvable, I think,” principal investigator and self-proclaimed “space farmer” Wieger Wamelink told Inside Science.

Feeding astronauts on Mars: All of the food eaten by astronauts aboard the International Space Station (ISS) is sent there from Earth. This isn’t exactly cheap, but it’s simple enough given that the ISS is close by.

Sending regular food resupply missions to Mars would take way too long and be way too cost prohibitive, though. Our best option, then, is to figure out a way for astronauts on Mars to grow food on the Red Planet, but we don’t know how our plants will react to the environment.

The harvest was smaller and the radiated plants had browning leaves.

Beware cosmic radiation: The sun and objects beyond our solar system are constantly emitting rays of charged particles known collectively as “cosmic radiation.”

Earth’s magnetic field deflects most of these cosmic rays, but Mars has virtually no magnetic field, so the radiation levels on its surface are about 17 times higher than on Earth’s.

Cosmic radiation has the potential to damage plants and alter their DNA, so we need to factor it into our plans for growing food on Mars, along with soil conditions, water availability, and more.

What they did: For a new study, Dutch researchers suspended radioactive cobalt above rye and garden cress plants to mimic the environment on Mars’ surface.

“[T]he experiment was carried out under strict safety precautions,” researcher Nyncke Tack said in a press release. “We conducted the experiment in a special ‘led [sic] castle’ and in a fume hood.”

Four weeks later, they compared the plants to ones grown without the faux cosmic radiation: the harvest was smaller and the radiated plants had browning leaves.

“I always expected that the radiation would have a negative effect on plant growth … but it was never very well investigated, so we needed to confirm if this expectation was correct,” Wamelink said in a press release.

Looking ahead: The experiment subjected the crops to just one type of radiation — gamma rays — but Mars surface is hit by several kinds of rays, so it may be worse.

Still, the study did mirror the amount of radiation likely to hit the plants, and now that we know it’s likely to negatively affect their growth on Mars, researchers can start considering how to account for cosmic radiation, perhaps by moving grow operations underground

“It is a bigger challenge than growing plants in a greenhouse on the surface,” Wamelink said, “but it also makes life easier since we can grow plants under fully controlled circumstances, applying LED light.” 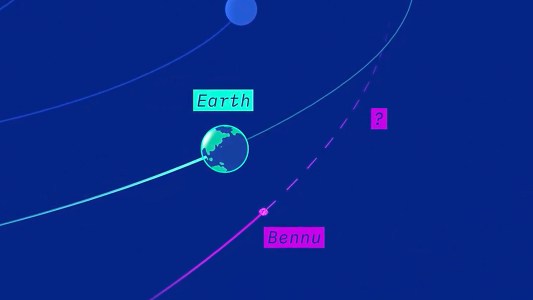 Using data from the OSIRIS-REx spacecraft, NASA has updated its predictions about the Bennu asteroid impacting Earth.