NASA’s Curiosity rover has discovered a Martian rock shaped like a flower — a relic from the ancient history of water on Mars.

What is it? Curiosity discovered the rock, which is smaller than a penny, near Mount Sharp in Mars’ Gale crater. NASA has named it the Blackthorn Salt, and it’s what’s known as a “diagenetic feature.”

These aren’t uncommon on Mars, and they formed when ancient water flowed through cracks in Martian rock. Minerals in the water hardened, and when the rock eroded, the diagenetic feature was left behind.

Taking the pic: Curiosity used the Mars Hand Lens Imager (MAHLI) camera on its robotic arm to take pictures of the Martian rock on February 24. It then merged up to eight of the photos into one image, putting as many details in focus as possible.

“Because the MAHLI focus merge is performed on Mars, it also serves as a means to reduce the number of images sent back to Earth,” NASA shared in a blog post.

This Martian rock could help NASA determine when the planet might have hosted life.

The big picture: The discovery of diagenetic features in a region lets NASA know it was once home to water. That information — along with  data from Mars orbiters, collected rock samples, and other sources — helps scientists piece together the history of water on Mars, including when it disappeared.

Water is a key indicator of life on Earth, so this knowledge could help researchers determine when the planet might have hosted life — and where to look for evidence of it today. 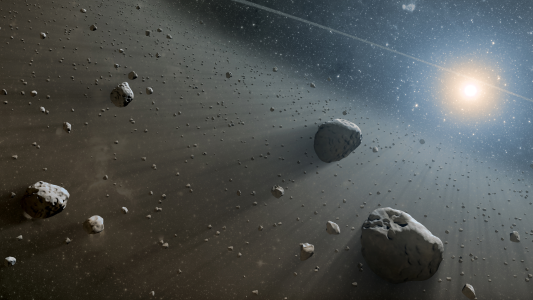 Cosmic bodies, like asteroids and comets, are constantly zooming through space and often crash into our planet.

Asteroids
An asteroid could wipe out an entire city – here’s NASA’s plan to prevent catastrophe
By Svetla Ben-Itzhak
Subscribe to Freethink for more great stories
Subscription Center
Sections
Video
Freethink
Subscribe
We focus on solutions: the smartest people, the biggest ideas, and the most ground breaking technology shaping our future.
Subscribe