A near-Earth asteroid discovered in 2016 may have once been part of the moon — making it unlike any space rock we’ve ever seen.

The satellite: An asteroid is classified as “near-Earth” if it’s within 121 million miles of the sun. Right now, we know of about 27,000 such space rocks, but only five are “quasi-satellites,” meaning they stick relatively close to Earth’s path while making their orbit around the sun.

Kamo`oalewa (2016 HO3) is the most recently discovered quasi-satellite. It was spotted by the Pan-STARRS 1 telescope at Hawaii’s Haleakala Observatory in 2016, and studying it hasn’t been easy.

For one thing, the near-Earth asteroid is only 150-190 feet wide — about the diameter of Niagara Falls’ SkyWheel. It’s never closer than 9 million miles away, and it is only visible in our sky for a few weeks in April, when the Earth is between it and the sun.

Lunar origin: In April 2017, researchers used two telescopes in Arizona — the Large Binocular Telescope and the Lowell Discovery Telescope — to collect data on Kamo`oalewa’s spectrum, which is the pattern of light reflecting off it.

Using that data, they could then get an idea of what the space rock was made of. At least, that was the plan.

“I looked through every near-Earth asteroid spectrum we had access to, and nothing matched,” said University of Arizona astronomer Ben Sharkey.

The spectrum was a match for moon rocks, though, hinting that Kamo`oalewa might have once been a part of Earth’s moon. In April 2021, the researchers observed the near-Earth asteroid again, and that data supports the lunar origin theory.

“This spring, we got much needed follow-up observations and went, ‘Wow it is real,'” Sharkey said. “It’s easier to explain with the moon than other ideas.”

The researchers have now published a paper arguing that Kamo`oalewa was once a part of the moon that broke off following an asteroid strike on the lunar surface.

“It is very unlikely that a garden-variety near-Earth asteroid would spontaneously move into an orbit like Kamo`oalewa’s.”

The rock’s composition isn’t their only supporting evidence, either — the orbit also indicates a lunar origin.

“It is very unlikely that a garden-variety near-Earth asteroid would spontaneously move into a quasi-satellite orbit like Kamo`oalewa’s,” study co-author Renu Malhotra said.

“It will not remain in this particular orbit for very long, only about 300 years in the future,” she continued, “and we estimate that it arrived in this orbit about 500 years ago.”

Looking ahead: Paul Byrne, a planetary scientist at Washington University in St. Louis, who wasn’t involved in the study, told the New York Times that the only way to confirm the moon theory is to actually collect samples of Kamo`oalewa.

Fortunately, China and Russia are already working on a joint mission to the rock, which could launch as soon as 2024.

“Until then, we’re left with the possibility that, on our journey through space, we’re accompanied by the remains of a collision that punched a hole in the moon,”  Byrne said. “And that’s pretty cool.” 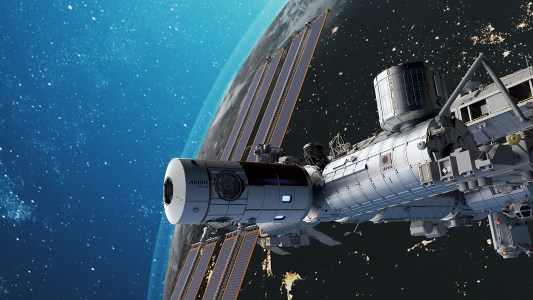 Private astronauts will have a chance to conduct microgravity research on the International Space Station during Axiom Space’s Ax-1 mission.

Aerospace
First commercial mission to the ISS prepares for launch
By Kristin Houser
Subscribe to Freethink for more great stories
Subscription Center
Sections
Video
Freethink
Subscribe
We focus on solutions: the smartest people, the biggest ideas, and the most ground breaking technology shaping our future.
Subscribe