An astronomer at the Carnegie Institution for Science has just discovered a new asteroid, and it’s the fastest-orbiting asteroid in our solar system — but speed is just one of the space rock’s strange attributes.

Unexplored space: Astronomers try to keep track of nearby asteroids so that we can avoid any collisions in space and, if possible, one day, prevent impacts with Earth.

Most asteroid surveys happen at night because that’s when the objects are easiest to see, but some asteroids have orbits that put them closer to the sun than Earth.

“The space interior to Earth’s orbit has been relatively unexplored.”

That means they’re never on the side of Earth experiencing night — they’re only within our line of sight in the daytime.

“The space interior to Earth’s orbit has been relatively unexplored to date,” Carnegie astronomer Scott S. Sheppard told CNN. “It is hard to observe the region towards the sun because of the sun’s extreme glare.”

At dusk and dawn: To catch those asteroids flying under the radar, astronomers are conducting surveys when they’re easiest to see: right when the sun is setting or rising.

The fastest-orbiting asteroid: Using those initial images and ones captured the following two nights, Sheppard and an international team of collaborators determined that the asteroid, dubbed 2021 PH27, orbits the sun in just 113 days.

Hot, strong, and unstable: Based on their observations, the astronomers believe the asteroid is about a little more than half a mile wide — Sheppard told CNN it’s unusual to discover a new asteroid of that size in the inner solar system, as most have already been detected.

The asteroid also has an unstable orbit that puts it closer to the sun than Mercury at some points and farther away than Venus at others.

“2021 PH27 gets so close to the Sun that its surface can reach temperatures of 900 degrees Fahrenheit (482 degrees Celsius), hot enough to melt lead,” Sheppard said.

“Because of these extreme temperatures,” he continued, “it is unlikely 2021 PH27 is composed of any volatile material, and it is most likely made up of rock with maybe some metal like iron.”

The future and past: The astronomers plan to keep an eye out for the solar system’s fastest-orbiting asteroid early next year, after it makes its journey around the sun and is once again within our view

Those observations should help refine estimates of the asteroid’s orbit and perhaps clear up some of the mystery surrounding the origin of it and the roughly 20 other asteroids we’ve discovered between Earth and the sun.

“Where are these inner asteroids coming from?” he asked. “Some are recently dislodged Main Belt Asteroids, other[s] might be extinct comets, but there could be another source population, such as the Vulcanoids” — a hypothetical belt of asteroids between the Sun and Mercury. 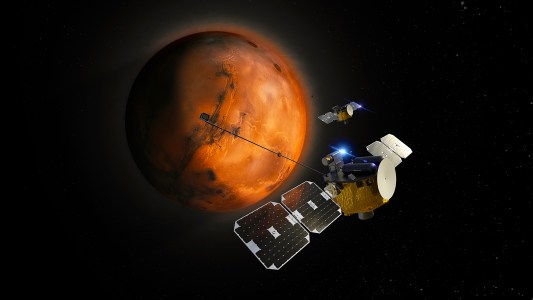 Two tiny Mars satellites will head to the Red Planet in 2024 as part of a NASA program testing smaller spacecraft on planetary missions.