On March 11, astronomers at NASA were able to pinpoint almost exactly where and when a new asteroid would hit Earth’s atmosphere, before it made contact.

It’s just the fifth time in history an asteroid has been spotted before it hit the Earth, but it’s a sign that our early asteroid defense systems are working as hoped.

The discovery: On March 11, at 3:34 p.m. ET, Krisztián Sárneczky, an astronomer at Hungary’s Piszkéstető Observatory, spotted a bright object moving quickly across the sky.

He collected four observations and sent them to the Minor Planet Center (MPC), which keeps track of the asteroids, comets, and other small celestial bodies in our solar system.

The MPC posted the observations of the object — now known as “2022 EB5” — on its public database, so that other astronomers could attempt to find the object and confirm that it was a new asteroid.

Sárneczky then sent another 10 observations to the MPC, which it also posted.

The surveillance: NASA has a system called “Scout” that automatically searches MPC’s database for any objects that might impact Earth or Earth’s atmosphere.

Using Sárneczky’s observations, Scout was able to calculate the trajectory of the new asteroid — and determine that it was on a collision course with Earth.

“Scout had only 14 observations over 40 minutes from one observatory to work with when it first identified the object as an impactor,” said Davide Farnocchia, a NASA engineer who developed Scout.

Global effort: Not long after the MPC posted Sárneczky’s observations, other astronomers — both amateur and professional — started submitting their own observations of 2022 EB5.

These helped NASA narrow down its predicted impact location and time to the atmosphere southwest of a Norwegian island called Jan Mayen, at 5:22 p.m. ET.

Infrasound detectors later confirmed that the new asteroid entered the atmosphere above the Norwegian Sea as predicted at 5:23 p.m. ET — less than two hours after it was first spotted in the night sky of Hungary.

Not a big one: The idea that NASA didn’t know an asteroid was on a collision course with Earth until about an hour before impact sounds bad — but the detection of 2022 EB5 is actually pretty remarkable.

Only four other asteroids have ever been detected prior to impact, and while asteroids of 2022 EB5’s size — about 6.5 feet in diameter — hit our atmosphere once every 10 months or so, we rarely spot them before impact.

“[V]ery few of these asteroids have actually been detected in space and observed extensively prior to impact, basically because they are very faint until the last few hours,” said Paul Chodas, the director of NASA’s Center for Near Earth Object Studies (CNEOS).

“[A] survey telescope has to observe just the right spot of sky at the right time for one to be detected,” he added.

The new asteroid entered the atmosphere less than two hours after it was first spotted.

What it means: Now, NASA has more confidence that it could spot a larger asteroid — the kind that could cause serious damage to Earth.

“This real-world event with a very small asteroid allowed the planetary defense community to exercise capabilities and gave some confidence that the impact prediction models at CNEOS are highly capable of informing the response to the potential impact of a larger object,” wrote NASA.

That detection would likely happen while the space rock was much farther away from our planet, with impact days, months, or even years into the future — giving us enough time (hopefully) to try to stop the space rock, perhaps by deflecting, slicing, or blowing it up. 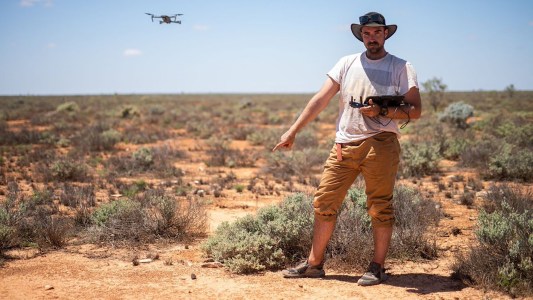 Drones
Drones and AI recover a meteorite for the first time
By Kristin Houser
Subscribe to Freethink for more great stories
Subscription Center
Sections
Video
Freethink
Subscribe
We focus on solutions: the smartest people, the biggest ideas, and the most ground breaking technology shaping our future.
Subscribe