Instead of only trying to defend Earth from likely asteroid impacts, UC Santa Barbara (UCSB) physicists think we should go on the offense, slicing up massive space rocks that might pose a threat in the future.

The challenge: In 1908, an asteroid exploded over a sparsely populated part of Siberia, leveling about 770 square miles of forest. Had this happened over a major city, countless lives could have been lost.

That explosion, the Tunguska event, is the largest asteroid impact event in recorded history, and it’s all but inevitable that an asteroid just as big — or bigger — is going to threaten the planet again in the future.

“There is a large asteroid or comet lurking in our solar system with ‘Earth’ written on it,” UCSB physicist Philip Lubin said in a press release. “We just do not know where it is or when it will hit.”

Planetary defense: To avoid that potential devastation, NASA and other space agencies are monitoring the millions of asteroids in our solar system, keeping an eye out for any that might threaten Earth.

The frontrunner method right now is attempting to change an incoming asteroid’s orbit by slamming into it with something — but that’s only likely to work if we have significant lead time before impact (ideally, decades).

If an impact is likely to happen sooner than that, using nuclear weapons actually might work, too. That approach could likely stop rocks a bit larger than the Tunguska asteroid, which was ~200 feet in diameter, but we’d need to nuke it a couple of months prior to impact. (And the most threatening rocks would still probably be too large to nuke.)

Pulverize It: The UCSB team is now proposing a method they say could stop larger asteroids (1,600+ feet in diameter) less than a month prior to impact — and it could even be used proactively, like a vaccine against deadly asteroid impacts.

They call it the Pulverize It (PI) method, and it starts with the use of a rocket to deploy an array of “penetrator rods” in the path of a large asteroid. These rods would be up to a foot wide and 10 feet long, and possibly filled with explosives.

When the asteroid hits the array at an extreme speed, the rods would “slice and dice” it into smaller pieces, most of which would simply burn up in Earth’s atmosphere.

​​“If you can reduce the big events, which are dangerous, into a bunch of little events that are harmless, you’ve ultimately mitigated the threat,” co-researcher Alexander Cohen said.

We wouldn’t need much lead time for these missions, either.

An asteroid the size of the Tunguska one could be intercepted just five hours prior to expected impact, and one eight times as wide could be diced up just 20 days prior. The rods themselves could be deployed as quickly as a company like SpaceX can ready and launch a rocket.

Planetary offense: PI could also be used to slice up massive asteroids that aren’t necessarily an imminent threat — such as the 1,600-foot-wide Bennu and the 1,200-foot-wide Apophis, which are predicted to pass close to Earth in the future.

“Should they strike, each of them has an energy at impact equal to all of the nuclear weapons on Earth combined,” Lubin said. “Imagine all of the Earth’s nuclear arsenal being detonated in a few seconds.”

“We could vaccinate the planet by using the penetrator arrays like the needles of a vaccine shot to prevent a catastrophic loss of life in the future,” he added.

The cold water: The UCSB researchers’ paper detailing the Pulverize It method has yet to undergo peer-review, though it has been submitted to the journal Advances in Space Research.

Even if their calculations hold up to scrutiny, there’s no guarantee that NASA or anyone else will dedicate the time and money to further developing the idea, let alone using it to prevent asteroid impacts.

Lubin thinks they should at least consider it, though — Earth-skimming asteroids have “snuck up on” scientists before, and right now, we don’t have any proven impact-prevention options that work on short lead times.

“Extraordinarily rapid response is possible,” Lubin said. “We don’t see any technological showstoppers. It’s synergistic with the current generation of launch vehicles and others that are coming out.”

Aerospace
Astronomers detect “mystery molecule” in exoplanet’s atmosphere
Thanks to the James Webb Space Telescope, we now know more about the atmosphere of WASP-39b, a distant gas giant, than any other exoplanet.
Up Next 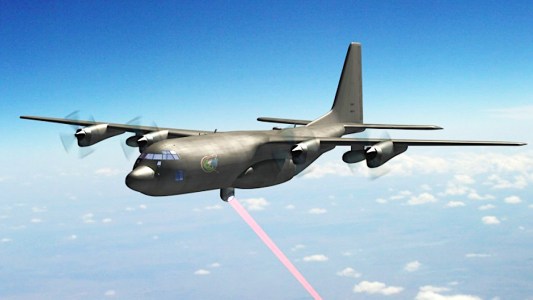 Aerospace
Air Force gunship will be equipped with anti-drone lasers
Subscribe to Freethink for more great stories
Subscription Center
Sections
Video
Freethink
Subscribe
We focus on solutions: the smartest people, the biggest ideas, and the most ground breaking technology shaping our future.
Subscribe