An international team led by Université de Montréal researchers has discovered an exoplanet they believe may be up to 30% water — meaning it could be the first known ocean planet.

Why it matters: Liquid water is necessary for life as we know it, so if we want to find evidence of extraterrestrial life, an exoplanet covered in large bodies of water would be a good place to start.

Decades of searching space have yet to reveal an ocean planet — Earth is still the only place we know of with bodies of liquid water on its surface — but we are also very limited in what we can observe about distant planets.

What’s new: The UdeM team has now discovered a promising ocean planet candidate in the “Goldilocks zone” of a star 100 light-years from Earth.

They first noticed signs of the exoplanet, TOI-1452 b, in data collected by NASA’s TESS space telescope. They then conducted follow-up observations of it using UdeM’s Mont Mégantic Observatory and Hawaii’s Canada-France-Hawaii Telescope.

Based on those observations, the exoplanet appears to be about 70% larger than Earth with just five times its mass. That means it’s less dense than Earth, where metal and rock account for 99% of the planet’s mass and water accounts for just 1%.

If a large percentage of the exoplanet’s mass came from water, that could explain its low density, since water is less dense than rock or metal.

​​“TOI-1452 b is one of the best candidates for an ocean planet that we have found to date,” said lead researcher Charles Cadieux.

Looking ahead: There are a few other ways to explain TOI-1452 b’s density without it being an ocean planet.

One scenario is that it’s a bare planet with no significant atmosphere and very little iron — but the scientists believe that such a planet is unlikely to form around a star like this.

Another is that TOI-1452 b is a terrestrial planet with a thin, low molecular weight atmosphere.

The researchers weren’t able to rule out that scenario, but TOI-1452 b is close enough to Earth that they should be able to analyze its atmosphere using the newly operational James Webb Space Telescope.

“Our observations with the Webb Telescope will be essential to better understanding TOI-1452 b,” said researcher ​​René Doyon. “As soon as we can, we will book time on Webb to observe this strange and wonderful world.”

The radius gap: Even if TOI-1452 b isn’t an ocean planet, it’s still a worthwhile target for study, because its radius puts it between the “super-Earth” and “sub-Neptune” planet types.

Planets in that range have been found so rarely it’s been dubbed the “radius gap” — and TOI-1452 b is right in the middle of it. It’s also in a part of the sky that Webb can observe all year round, meaning we may soon know more about this elusive type of exoplanet. 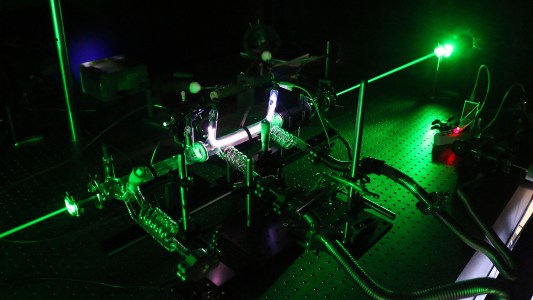 Aerospace
A plasma reactor could help astronauts breathe on Mars
By Kristin Houser
Subscribe to Freethink for more great stories
Subscription Center
Sections
Video
Freethink
Subscribe
We focus on solutions: the smartest people, the biggest ideas, and the most ground breaking technology shaping our future.
Subscribe