It’ll take about seven months to send humans to Mars using today’s spaceships. That’s not exactly a quick jaunt, but it is doable.

Trips to other planets could take years, though, and if we want to explore the rest of our solar system — or the places beyond it — we’re going to need a faster way to travel.

Now, a physicist has designed a new rocket thruster that could potentially allow humans to travel 10 times faster in space — and it’s inspired by nuclear fusion.

One of the simplest ways to understand rocket propulsion is to consider a balloon.

If you fill a balloon up with air and then release its nozzle, the air will escape through the hole, and the balloon will go flying in the opposite direction — the force with which that balloon moves is its thrust.

Most rockets also expel gas at one end to create thrust and move through space, and their speed is determined by their size and the amount of thrust they produce.

To create the exhaust gas, most rocket thrusters burn chemicals, and while that can produce a lot of thrust, it’s generally short-lived — all the propellant is quickly used up.

“Long-distance travel takes months or years because the (propellant efficiency) of chemical rocket engines is very low, so the craft takes a while to get up to speed,” Fatima Ebrahimi, a physicist at Princeton Plasma Physics Laboratory (PPPL), said in a press release.

Now, Ebrahimi has revealed a new type of plasma-based rocket thruster that could allow for faster space travel.

Plasma is a state of matter sort of similar to gas but with electrically charged atoms. Plasma thrusters expel particles of plasma (instead of gas) to propel spacecraft.

Space agencies have been using plasma thrusters since the 1960s, but all of the tried-and-true devices rely on electric fields to push the plasma particles out of the back of the rocket.

We could conceivably complete long-distance missions in a shorter period of time.

This happens anywhere plasma is present, including on the surface of the sun. Magnetic field lines get so close to one another that they connect at one point and cancel each other out.

“At that point of contact, magnetic energy is annihilated, and the energy is converted to kinetic energy (mostly),” Ebrahimi told Freethink.

“The process of magnetic reconnection happens during the eruption of solar flares,” she added, “when mass and energy is ejected from the solar surface into space.”

Magnetic reconnection also happens in the fusion reactor at Ebrahimi’s lab, which is what inspired her to consider applying the process to a rocket thruster.

“During its operation, this (device) produces magnetic bubbles called plasmoids that move at around 20 kilometers per second, which seemed to me a lot like thrust,” she said in the press release.

After more than three years of development, Ebrahimi has released a paper describing her rocket thruster design and the computer simulations she ran to test its potential.

“In my thruster concept, we impose magnetic fields through coils that carry electric currents,” she told Freethink. “At locations called reconnection sites, field lines converge…and energy is converted to exhaust velocity for this thruster.”

The rocket thruster’s exhaust reached velocities as high as 310 miles per second in simulations.

Using magnetic fields, instead of electricity, to propel plasma in a rocket thruster would make it easier for scientists to control the speed of a spacecraft, according to Ebrahimi.

“By using more electromagnets and more magnetic fields, you can in effect turn a knob to fine-tune the velocity,” she said in the press release.

It would also allow for more plasma options — instead of having to use heavy atoms, as with current plasma thrusters, scientists could use heavy or light. Lighter atoms would provide less thrust, but they are also (of course) smaller, which could be an advantage in some situations.

Finally, unlike other plasma thrusters, which only eject particles, this one would also eject plasmoids.

You can in effect turn a knob to fine-tune the velocity.

That would give the thruster more power — in computer simulations, the thruster’s exhaust reached velocities as high as 310 miles per second, which is 10 times faster than other plasma thrusters.

“If we make thrusters based on magnetic reconnection, then we could conceivably complete long-distance missions in a shorter period of time,” Ebrahimi said.

Before astronauts can use this new rocket thruster to zip around space, though, Ebrahimi and her collaborators will need to secure funding for more research and development.

“When and if we get funding, we should have a working device in a lab in about two years,” she told Freethink. “A prototype in space will be a couple of years later.” 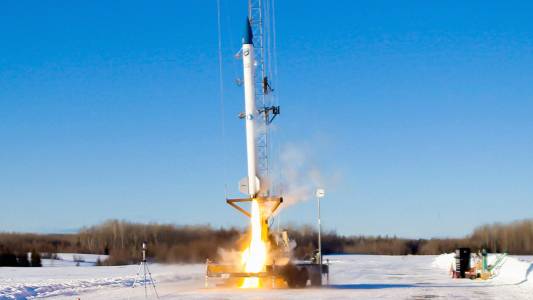 Startup bluShift has successfully launched a biofuel rocket, proving that biofuels could be the future of more sustainable spaceflight.

Aerospace
Biofuel rocket launch is a first in aerospace
By Kristin Houser
Subscribe to Freethink for more great stories
Subscription Center
Sections
Video
Freethink
Subscribe
We focus on solutions: the smartest people, the biggest ideas, and the most ground breaking technology shaping our future.
Subscribe