Over the past few decades, we have paid many unmanned visits to our red planetary neighbour. Today, the Martian surface is meticulously scanned by no less than 8 orbiting satellites, whose images can pick out individual features measuring just one foot in size.

Even more impressively, 3 rovers are now actively trundling across Mars’ surface: not only providing detailed information about its atmosphere and surface chemistry, but also taking spectacular images of its alien landscape.

Yet despite these incredible achievements, both high and low, there are still vast tracts of Mars’ surface and atmosphere that remain virtually unexplored – and many of these are of the most interesting places to planetary scientists.

Among these are rugged terrains, including canyons and craters, that would be far too difficult for rovers to navigate.

Besides this, there are many important aspects of Mars’ lower atmosphere that can’t be probed directly by either rovers or orbiting satellites: its wind patterns, temperature variations, and the transport of ice, dust, and water vapour.

Wind-powered sailplanes: While some researchers are hoping to explore these regions more thoroughly using powered aircraft, these would likely be either too small or too bulky and complex for missions in the near future.

To tackle the challenge, Jekan Thanga and colleagues at the University of Arizona have now proposed a new aircraft design, powered entirely by the Martian wind.

The team’s design is inspired by the albatross: a bird which can spend years of its life in flight without ever touching land. The albatross uses a combination of techniques to stay in the air without exhausting itself. Among these are vertical updrafts of warmer air, generated as the planet’s surface is heated unevenly by the Sun.

There are still vast tracts of Mars’ surface and atmosphere that remain virtually unexplored.

Alternatively, updrafts can form as winds are accelerated or diverted around geological features like cliffs and ridges. In either case, an albatross can soar by simply spreading its wings, and hitching a ride to higher altitudes on the moving air.

Another mechanism used by the birds is a zig-zag motion named “dynamic soaring.” This involves repeatedly crossing the boundary between two masses of air, each flowing at different speeds. Here, the birds pick up speed and momentum as they enter the faster, higher-altitude air mass, then turn around to enter the slower-moving air mass, while maintaining their new speed.

Finally, they turn around again before entering the faster air mass, and the cycle repeats. In this way, an albatross can harvest the atmosphere’s wind energy practically indefinitely, while expending very little of its own energy.

Exploring a canyon: By combining equations of their sailplane’s motion with simulations of the wind in Mars’ lower atmosphere, Thanga’s team showed how flight paths could be calculated to allow the aircraft to soar for as long as possible, while collecting valuable scientific data.

In one scenario, they describe how a pair of sailplanes could be used to explore a new canyon on Mars. The first of these planes would deploy and navigate close to the canyon floor, and then use dynamic soaring to either move down the canyon, or loiter over interesting targets, allowing it to gather more detailed images.

Some time later, a second sailplane would fly along the canyon’s wall, using the first aircraft’s data to identify potential interesting targets. This time, the plane would repeatedly dive down to the floor, and climb back above the canyon; gaining energy from the updrafts generated by the canyon wall.

After completing their respective missions, the planes could each make a soft landing on the planet’s surface, while keeping their valuable scientific instruments intact.

From their landing sites, each sailplane would act as a surface weather station: a node in a more extensive weather monitoring network. This would allow researchers to monitor weather over regions of the Martian surface that would otherwise be impossible to reach.

Hitching a ride: The Arizona team propose that their sailplane could be easily stowed aboard spacecraft carrying future rovers and satellites to Mars.

With its simple, lightweight design, the sailplane could be folded and packaged into a CubeSat — a tiny satellite measuring just 10 centimetres across. Over its destination, the sailplane could either be rapidly deployed from the spacecraft during its descent, or carried into the air by a blimp or hot-air balloon once the main spacecraft has landed.

Thanga and his colleagues hope to test their design at high altitudes in Earth’s atmosphere, where the air is thin enough to closely resemble the dynamics of Mars’ lower atmosphere. If their initial experiments are successful, they hope that their sailplane design will be funded by NASA, ultimately hitch a ride to Mars on a mission in the not-too-distant future.

By opening up vast new expanses of the Martian surface and atmosphere to exploration, the soaring aircraft may soon help us to understand our planetary neighbour in far more detail.

Ultimately, the measurements it provides could take us a step closer to answering pressing questions: including whether Mars may have hosted life in its distant past — or, in the future, whether the Red Planet may provide a suitable new home for human settlers. 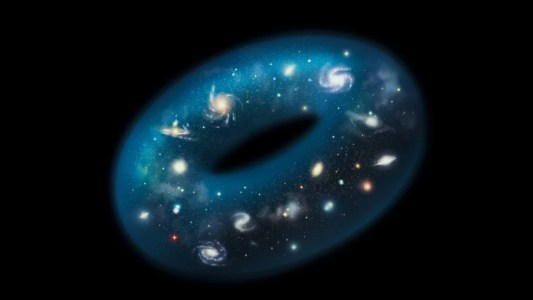 When we measure it, we find that our Universe really is flat. Here’s what we can learn from that, and why it matters so much.

Outer Space
The Universe is flat. Here’s what that teaches us.
By Ethan Siegel
Subscribe to Freethink for more great stories
Subscription Center
Sections
Video
Freethink
Subscribe
We focus on solutions: the smartest people, the biggest ideas, and the most ground breaking technology shaping our future.
Subscribe