California-based space startup SpinLaunch just threw a camera-carrying projectile toward space at more than 1,000 mph — by spinning it really, really fast and then letting it go at precisely the right moment.

Fling ‘em: Instead of launching satellites the traditional way, with giant rockets and a ton of fuel, SpinLaunch wants to load satellites into a “launch vehicle” and then spin the vehicle in a massive vacuum-sealed centrifuge until it is moving incredibly fast.

The centrifuge will then release the vehicle at just the right moment to send it hurtling toward space. Once it’s high above Earth’s surface, the vehicle will open up and a small booster will guide the satellite into orbit.

The system wouldn’t be able to carry large payloads, but SpinLaunch expects it’d be able to deliver two small satellites (about 440 pounds total) into orbit per launch, at a price far lower than what’s currently possible — and with the possibility of two launches per day.

“This is about building a company and a space launch system that is going to enter into the commercial markets with a very high cadence and launch at the lowest cost in the industry,” he continued.

What’s new? SpinLaunch hasn’t built the huge orbital accelerator it will need for satellite deployments yet, but it has constructed a smaller suborbital launcher to test its technology.

The 165-foot tall device is the largest vacuum-sealed centrifuge in the world, and in April 2022, SpinLaunch used it to send a test vehicle with a digital camera on board flying toward space at more than 1,000 mph.

The startup has released footage from the camera. If you get dizzy easily, you might not want to watch it, but if you have a strong stomach and have ever wondered what it’d be like to be catapulted away from Earth at 1,000+ mph, just push play.

Looking ahead: This is SpinLaunch’s eighth test with its suborbital accelerator, and the inclusion of the camera “marks an important step towards integrating complex payloads into SpinLaunch flight test vehicles,” according to the company.

SpinLaunch plans to conduct about 30 tests with this launcher, and at least one will include a NASA payload — if that test goes well, the space agency is ready to consider purchasing launch services from the startup’s orbital launcher. 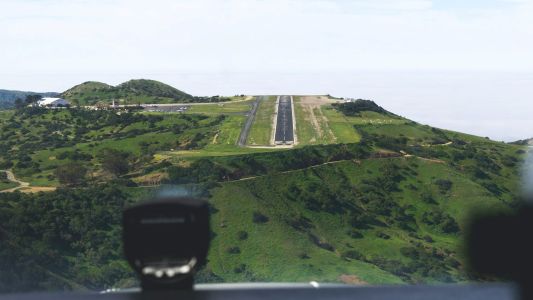 The UK’s development of an urban airport for flying cars and drones could inspire other nations to follow suit.

Transportation
The world’s first airport for flying cars and drones has just landed
By Douglas Broom
Subscribe to Freethink for more great stories
Subscription Center
Sections
Video
Freethink
Subscribe
We focus on solutions: the smartest people, the biggest ideas, and the most ground breaking technology shaping our future.
Subscribe