Ever since my fifth-grade class buried a jar of notes in the playground, time capsules have captured my imagination. We intended to unearth it when we graduated high school, but that never happened, and the note I wrote on that pink index card remains a mystery, even to me.

NASA has also been fascinated by time and the future. In the ‘70s, NASA’s first four spacecraft to leave our solar system had time capsules — plaques inscribed with messages to possible alien life.

NASA sent the time capsule to space hoping that astro-archeologists of the future will find it and learn a bit about early space exploration and life today.

Once again, NASA is sending a message to space. This time, the message is meant for future generations of humankind.

Lucy in the sky with diamonds: The latest time capsule will be carried aboard the NASA spacecraft, Lucy, bound for the Trojan asteroids. The cluster of rocks shares an orbit with Jupiter, circling the sun.

Because the rocks are like space fossils, NASA named the spacecraft after Lucy, the fossilized human ancestor discovered in 1974.

In 2033, Lucy will visit eight asteroids that are on six independent orbits around the sun. When Lucy finishes, it will continue to orbit among the Trojan asteroids for thousands or possibly even millions of years, NASA reports — long enough for future generations of human explorers to rediscover after it has been forgotten.

What is the message? NASA sent the time capsule to space hoping that astro-archeologists of the future will find it and learn a bit about early space exploration and life today. They filled the plaque with messages from prominent members of society — words of advice and wisdom to our descendants in the future.

Quotes by Nobel Laureates in Literature and United States Poet Laureates were among the messages to future generations. People like Albert Einstein, poet Joy Harjo, Martin Luther King Jr., Yoko Ono, Carl Sagan, and The Beatles all make an appearance on the golden plaque. Even Amanda Gorman, known for the poem she read at President Joe Biden’s inauguration, contributed to the plaque.

Some of the messages include:

“There are no curses – only mirrors held up to the souls of gods and mortals,” by Rita Dove, the first African American Poet Laureate.

“Who Wants to live Forever? – if love must die,” by singer-songwriter and astrophysicist Brian May.

You can read the entire message on NASA’s Lucy Plaque website. The plaque also includes a current picture of the Solar System and a map of Lucy’s trajectory.

We earthlings are constantly creating a time capsule for future generations. Libraries, the internet, and even Freethink.com are an archive of messages to ourselves about our collective values, struggles, and accomplishments. One day we’ll look back on the fantastic innovations of today — like artificial intelligence, nuclear fusion, or a floating city — and reminisce at how simple they seem.

We’d love to hear from you! If you have a comment about this article or a tip for a future Freethink story, please email us at [email protected]

These are the next big breakthroughs in medicine
In partnership with Intuitive
These companies are working to change the future of health care.
By Ross Pomeroy

Series|Operation: Reimagine Surgery
This amazing gel may help in the fight against cancer
6:11
In partnership with Intuitive
“Instead of thinking about a treatment, we can, really for the first time, think about a cure.”
Up Next 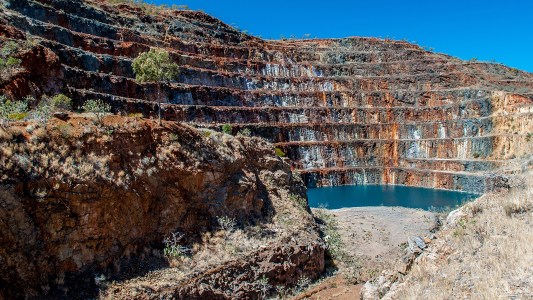