NASA recently challenged its interns to design a washing machine for astronauts aboard the ISS — and their idea, inspired by a Slushie machine, might one day actually make it to space.

Space laundry: The average mission aboard the ISS is six months long, but astronauts are only allowed to bring two small suitcases of clothing with them — not only is room tight on the ISS, but every extra pound of clothing can increase launch costs by $10,000.

Astronauts can’t clean any of the clothes they bring, either, because standard washing machines don’t work in microgravity. Even if they did, they require a lot of water, which would need to be shipped to and stored on the ISS — again, increasing launch costs and decreasing available space.

Why it matters: Currently, astronauts just rewear clothes until they reach intolerable grossness. At that point, the garments are loaded onto a rocket and blasted into space to burn up in Earth’s atmosphere.

That means astronauts might have to wear the same pair of underwear for a week to ensure they have enough to last for the duration of their mission. Not only can that be uncomfortable, it can also invite the growth of dangerous microbes.

A washing machine for astronauts: NASA decided to give the 2020 summer interns at Glenn Research Center a chance to tackle the problem of space laundry through a new design challenge.

According to Nancy Hall, a NASA fluid physics expert and consultant on the challenge, the ideas the interns came up with might be incorporated into a washing machine for astronauts that’s actually sent to the ISS.

“Students are very creative,” Hall said in a press release. “They don’t see the limitations we see.”

Cleaning up: After dividing into six teams, the interns were assigned a NASA mentor and given one week to design their washing machine for astronauts. They then presented their designs to a panel of NASA judges.

Their washing machine is a box-like container housing two large corkscrews that spin, agitating clothes to help get them clean. The group called the machine SLUSH (Screw-Like Undirtying Spinning Hardware), a nod to the spinning Slushie machine that inspired its design.

Looking ahead: Details on SLUSH are scarce, meaning we don’t know just how practical the interns’ washing machine for astronauts would be for an actual deployment to the ISS. However, we do know that NASA is serious about finding a solution to the problem of astronauts’ dirty laundry.

In June, Tide announced that it had signed an agreement with NASA to develop and test a detergent and other laundry tech designed specifically for use in space. The plan is for the detergent to work with minimal water and for the used water to be easily purified for drinking.

(Wasting water in space is not an option.)

That detergent will be heading to the ISS in 2022, and if it performs well in space, it might even lead to more sustainable laundry solutions here on Earth. 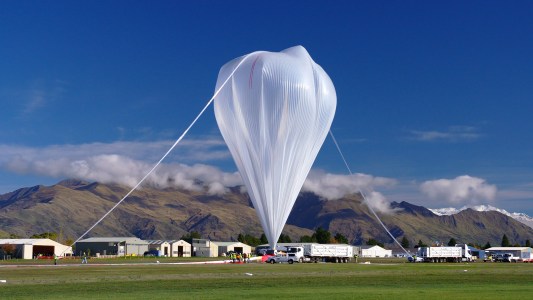 NASA’s new balloon-borne telescope could let astronomers study distant objects with the latest tech at a fraction of the cost of Hubble.