Scientists want to count all the trees on the planet to understand how much carbon the Earth can store. To say that’s a daunting task is an understatement.

So NASA and an international team of researchers are getting a little help from artificial intelligence, enlisting supercomputers to do the job, via imaging from space.

Their first recruit is Blue Waters, one of the world’s fastest supercomputers, located at the University of Illinois. Using “deep learning,” the team analyzed satellite images of West Africa’s terrain, from both arid and semi-arid regions, to evaluate the trees’ potential for holding carbon.

Before the computer could do the work, it first had to be trained. The team began by manually marking trees. Martin Brandt, an assistant professor of geography at the University of Copenhagen, marked nearly 90,000 unique trees himself. This allowed the algorithm to “learn” what shapes indicate trees.

Efforts have been made to determine the extent of carbon stocks in forests worldwide, but less attention has been afforded to measuring the carbon of trees growing outside of forested areas.

To get a fuller picture, the team opted to concentrate on isolated trees, using satellite technology to map individual trees’ location and size.

“In one kilometer of terrain, say it’s a desert, many times there are no trees, but the program wants to find a tree,” Brandt said in a statement. “It will find a stone, and think it’s a tree. Further south, it will find houses that look like trees. It sounds easy, you’d think — there’s a tree, why shouldn’t the model know it’s a tree? But the challenges come with this level of detail. The more detail there is, the more challenges come.”

Using the newly trained machine-learning algorithms, they mapped the crown diameter of 1.8 billion trees, over an area of more than 500,000 square miles, and published their work in Nature.

They found that they could count trees that satellites hadn’t before seen — discovering billions of trees and demonstrating a new method for reliable land-based carbon-storage measurements. This task would take humans years to accomplish, but it took the AI only a few weeks.

Carbon circulates between the land, atmosphere, and ocean. Human activities, like burning fossil fuels or clearing forests, release excess carbon dioxide into the atmosphere — but because trees use carbon to grow, they can store carbon in their trunks, leaves, and branches.

Getting a sense of how many trees Earth has and how much carbon can be stored in them would help conservation experts understand where to focus their efforts. They could use this technique to track deforestation and assess the effectiveness of conservation efforts.

“For preservation, restoration, climate change, and other purposes, data like these are very important to establish a baseline. In a year or two or ten, the study could be repeated with new data and compared to data from today, to see if efforts to revitalize and reduce deforestation are effective or not. It has quite practical implications,” said NASA Goddard programmer, Jesse Meyer. 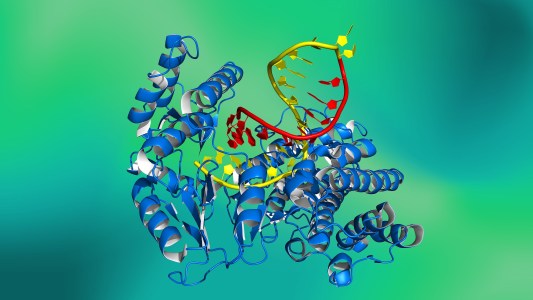 A protein’s structure is crucial to its function. Predicting how a protein will fold was a challenge decades in the making — and answered by DeepMind.