The prospect of Apple AR/VR headsets continues to be one of the hottest discussions in the XR landscape, but due to Apple’s emphasis on secrecy, there’s still a lot we don’t know about the hardware and how it will work.

Now: Through new details outlined in a report from The Information, we can make some key inferences about how an Apple headset will function.

In specific, it’s likely that at least one headset from the company will require connecting to another device to handle the computing demands necessary to produce AR/VR content.

Like the Apple Watch, this would be through a wireless connection, such as to an iPhone, iPad, or Mac computer.

Why it matters: Apple is the biggest open question mark in the XR industry. Given its market-making success in other consumer electronics, from iPhones to Apple Watches, Apple’s formal entry into the XR hardware arena will be a major moment in an industry that is currently dominated by Facebook and Snap, Inc.

Meanwhile, Snapchat launched the fourth generation of its Spectacles smart glasses in May, which allow limited built-in AR functionality.

Many see an Apple headset as being possibly the only meaningful threat to Facebook’s current market supremacy in VR hardware (and burgeoning presence in AR). Given the ongoing battle between the two and their respective takes on privacy and data, this is a competition that takes on bigger weight in industry discourse.

Fine Print: In 2020, Apple completed work on several custom chips for AR/VR headsets. Included in this was the key system on a chip (SoC), which, as the name might suggest, integrates many different aspects of the device on a single piece of silicon. According to anonymous sources interviewed by The Information, the SoC in question is intentionally missing capabilities found in other Apple processors, such as iPads and MacBooks.

The Information reports that the custom chips ‘are at least a year away from mass production.'”

Rather than optimizing for the maximum capability, the SoC is built to prioritize sending, receiving, and compressing/decompressing data — while using the minimum amount of energy possible. In theory, this would allow the headset to have a longer battery life and decrease the heat emitted by the headset itself, all by offsetting the compute tasks to a separate device.

Building the plane as it takes off: In 2020, a Bloomberg report described earlier versions of the forthcoming headset that were intended to work by connecting to a separate “stationary hub” that “resembled a small Mac” but Jony Ive, then Apple’s Chief Design Officer, rejected those designs (with Tim Cook’s blessing) in favor of standalone glasses.

Now, it looks like Apple has shifted back to a tethered design, though The Information reports that the headset will have its own CPU and GPU, implying that it will be able to communicate with mobile devices rather than requiring a computer.

Whatever the case, the fact that Apple is reverting to a tethered model indicates that the quest to create a pair of lightweight glasses that can achieve powerful AR/VR is still years away.

In fact, even this tethered headset is still probably more than a year away. Despite rumors of a $3k “helmet” type headset in 2022, followed by a sleeker pair of AR glasses in 2023, The Information reports that the custom chips “are at least a year away from mass production,” which means the most optimistic imaginable scenario would be a late 2022 release for a headset.

But given how things seem to have gone thus far, it’s starting to feel like 2023 is a more apt expectation for even an entry headset from Apple — and even longer for a pair of AR glasses.

VR
We can now explore Meta’s first virtual world
Meta (formerly Facebook) has opened up access to Horizon Worlds, its virtual world for the metaverse, to all adults in the U.S. and Canada.

VR
VR shows parents what will happen in their baby’s surgery
A U.K. hospital is using VR to help parents see the potential impact skull-reshaping surgery could have on their baby’s appearance.
Up Next 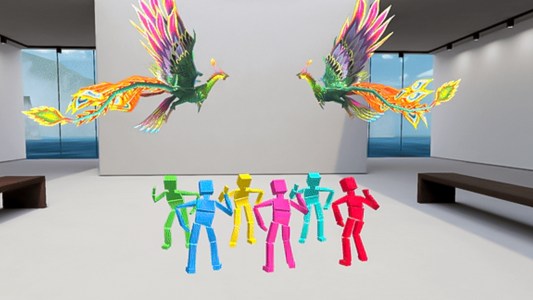 From virtual collaboration to NFT Galleries, one of the immersive industry’s most ambitious startups is making its metaverse play.

VR
Understanding the metaverse through Spatial
Subscribe to Freethink for more great stories
Subscription Center
Challenges
Video
Freethink
Subscribe
We focus on solutions: the smartest people, the biggest ideas, and the most ground breaking technology shaping our future.
Subscribe