An archeologist and adventurer, TV host Josh Gates contends with the mysterious and mythological, from Egyptian mummies and Mayan-relic filled cenotes to the cultural and medical truths behind the vampire. But what makes Gates’ Expedition Unknown different from other shows of its ilk is that Gates, well… actually discovers things on his show.

Everyone can be an adventurer, Gates says, though the professionals have a vast array of tools at their disposal (including some you aspiring pulp heroes can use, too). Combine that cutting-edge technology with intensive research — and no fear of tarantulas and tight spaces (if you want to go wild, take a shot every time Gates crams himself into a tunnel/tomb/catacomb) — and you can find artifacts and answers that would have been impossible just a few years before.

Freethink caught up with Gates during a break from a voiceover session to talk jungle-penetrating  satellites, swimming drones, and Dead Sea Scrolls.

This interview has been edited for length and clarity.

Freethink: One of the coolest technologies I saw on Expedition Unknown were the drones and AI algorithms that create 3D models of structures instantly. This tech was used during your search for the mummy of Atahualpa, the last Incan king. What was it like to see that happen, and how can archeologists take advantage of those models?

Josh Gates: Just about every technology you can think of now is being brought to bear on archeology and exploration in the 21st century. The use of drones, the use of satellites, coupled with really extraordinary tech like LIDAR, is really changing archeology.

LIDAR is this laser mapping technology that allows archeologists to strip away surface features and really accurately map sites. This is a technology that’s allowing explorers to find all sorts of sites they didn’t know about before. And there are incredible applications for that kind of 3D modeling everywhere you look. There’s a lot of photogrammetry going on in terms of underwater archeology.

We just worked with an amazing team that is mapping the wrecks of ships off of Omaha Beach at Normandy from D-Day. The ocean is really consuming all of these wrecks that participated in the invasion at Normandy. And using photogrammetry and other technology, we’re able to create really accurate 3D models for the future, so that these ships can be virtually studied and virtually preserved even if they don’t end up being preserved in the real world.

Freethink: That sort of segues right into my next question. Can you tell me a little bit about the advantages of, or what’s unique about, using underwater drones (automated underwater vehicles, AUVs) to scan the ocean as opposed to the more classic ways we look underwater?

Josh Gates: Looking for shipwrecks from the surface can be an extremely challenging business. Often explorers will physically tow either a sonar unit or a magnetometer behind a ship, and it’s very difficult work. You’re in any kind of conditions out there, trying to be tethered to a device that’s flying in some cases in really, really deep water, hundreds of feet down.

AUVs are a pretty magical technology. You have these standalone submarines that are able to be programmed to run a course with extreme accuracy, and provide really detailed sonar data back to the surface. And what’s really important when you’re doing sonar mapping is that you don’t miss anything, right? You have to mow the lawn and go back and forth over these lanes, but you need those lanes to overlap a little bit so that you’re getting really good coverage of the ocean floor. Because if you even stray by 30, 40, 50 feet, you could miss a wreck entirely.

These offer an incredible amount of accuracy to be able to go down, run a preprogrammed course and, and just bring back really, really accurate data to the surface. So they are a real game changer. They can operate in all kinds of weather at the surface. You can be limited by surface conditions, by storms, by current, by weather conditions. Whereas these devices, once programmed, will really go and do a lot of the really difficult work for you.

Freethink: Yeah. And they never get tired either.

Freethink: Oh, that’s the worst. One of the most amazing technologies that I’ve seen on the show was the multi-spectrum scanner that brought the text out (of an illegible fragment of) the Dead Sea Scrolls. Can you tell me a little bit about what that technology is and bringing those words back to life? These like very ancient, very important words, readable again.

Josh Gates: The Dead Sea Scrolls are incredibly important documents. I mean, these are the oldest copies that we have of the Hebrew Bible. And a number of these scrolls are so delicate to the touch that they will almost disintegrate.

There’s actually many different processes now being applied to these Scrolls. One of the most kind of sci-fi is this virtual unwrapping that they’re doing. So instead of actually taking a Scroll that’s all bound up and trying to find a physical way to unwrap it, they can digitally scan the scroll and then actually peer in-between the pages to be able to read something that hasn’t been looked at, you know, (in) years.

It’s a way to look at things that otherwise really are unreadable. And to provide historians with a really important look at some of the oldest religious documents that we have.

Freethink: Was there an emotional element to seeing it happen?

Josh Gates: Seeing the Dead Sea Scrolls in person was, for me, the thrill of a lifetime. I mean, you’re looking at, standing inches away, from the oldest copy of the book of Genesis that we have. And you just sort of think, “please don’t sneeze.”

I mean to just come face to face with these words that have been some of the real guiding principles for a billion people on the planet is really, really powerful stuff. You just feel absolutely transported into history, and it is emotional.

Freethink: You focus on these mysteries and legends of archeology. How did you develop a fascination with that aspect of the field?

Josh Gates: Like many children of the ’80s, I grew up obsessed with Indiana Jones. I could probably quote Raiders of the Lost Ark front to back. So from an early age, I just had this real obsession with adventure and mystery and archeology.

But I also think that many of these stories are just naturally captivating. You know, we’re talking about tales of lost empires and vanished explorers and buried treasures. I mean, these are the kinds of stories that just have incredible natural hooks. And so I think that like many people, I just find that fascinating.

Freethink: What new technology do you sort of see coming down the pike that you’re really excited about?

Josh Gates: I think there’s all sorts of things. I think LIDAR really is one of the most exciting technologies out there. Somebody referred to it a few years ago as the El Dorado Machine, something that was going to help us find many of the lost ruins on the planet.

But I just think that remote imaging technology in general is really exciting. I mean, it’s incredible what’s being done with satellites now.

My good friend, Dr. Sarah Parcak, she won the TED Prize, and she’s created this incredible platform to allow citizen explorers to review satellite imagery to try to identify archeological sites in Egypt, and to even identify evidence of potential looting at sites.

So this idea that we can take satellites in space and not only deploy them to help archeologists, but actually deploy them so that you and me, everyday people, can participate in exploration is a really incredible thing.

Freethink: That’s interesting that you mentioned the citizen scientists. There’s a proud tradition in archeology and paleontology of citizen scientists making a real difference. You know, a farmer turned something over in their field, and there you go.

Josh Gates: There is a really important connection between archeologists and the public, and I think that they really do have to work together. I think one of the dangers of technology is this idea that we’re living in an age where everything has been mapped and explored.

I think a lot of young people especially have a smartphone in their pocket, and they sort of feel like, well, you know, “Google maps can take me everywhere, right?” And when they learn that there are parts of the world that really have not been properly mapped and explored, it is shocking to people.

I think the idea of inviting people into the tent is important because it helps them to understand how much we don’t know still, and hopefully inspires them to be a part of the search themselves and to collectively explore our shared heritage.

Freethink: Despite all of this technology, do you think there’ll always be a place for a shovel in the ground?

Josh Gates: I think any archeologists would tell you that not only will there be a place for it, but it will always be the more important thing. You know, remote sensing and technology can only take us so far. Ground truthing — getting down there in the dirt and actually not just seeing what’s there but cataloging it properly, conserving it, and interpreting it — is really never going to go away.

There are a lot of people who say LIDAR is a dangerous technology because it simply identifies sites, but it doesn’t do anything to conserve them. You could make the argument that, okay, now everybody knows where some ruined temple is, and looters and other people who maybe don’t have the best interests of preservation in mind can make it out to those sites. The human element is so important in archeology because it really is where you interpret the data and carefully study it.

I think that’s the beauty of it. They’ll always be a really important connection between technology and people, but that at the end of the day, without archeologists, we’re not going to have that vital context that we need to understand what (we) discovered. 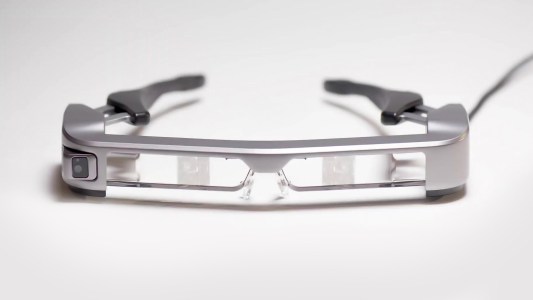 London’s National Theatre made performances more accessible to patrons with hearing loss by creating a smart set of glasses that recognizes spoken words and adapts to stage cues to provide real-time captions.