Road transportation accounts for nearly 12% of global greenhouse gas emissions, so transitioning from gas- and diesel-powered vehicles to electric vehicles (EVs) is key to the battle against climate change — but despite tremendous growth, in 2021, fewer than 10% of new cars sold worldwide were electric.

One of the most common reasons car buyers give for not choosing an EV is the vehicles’ long charging times — while you can top off a car’s gas tank in just a few minutes, charging an EV to 80% can take anywhere from 30 minutes to 8 hours.

But recent innovations promise to dramatically speed up the charging process — and accelerate our transition to a carbon-free future.

The type of EV charger you use — Levels 1, 2, or 3 (also known as “direct current fast chargers,” or DCFCs) — plays a huge role in charging speed. The higher the level, the greater the charger’s output, which typically equates to a faster charge.

Building more fast chargers is one way to encourage EV adoption — today, just 12% of the 48,000 charging stations in the US are fast chargers — but charging speed isn’t solely dependent on the charger you’re using.

The lithium-ion batteries used in most EVs have limits on how quickly they can be charged, and exceeding those limits can damage the batteries and decrease their lifespan.

To avoid that, chargers and EVs communicate to determine the fastest rate the vehicle can be charged while minimizing damage — as a result, you could plug two different EVs into identical chargers, and one could charge faster than the other.

While we may be able to speed up charging by improving lithium-ion batteries, we may also be able to accelerate it — and enjoy other benefits — by using new types of batteries in our EVs.

Solid-state batteries are one of the most promising alternatives.

While solid-state batteries aren’t new, they’ve had a number of issues that need to be worked out before they could be usable. Now, several startups say they’ve finally landed on designs that could last for years in EVs and be affordably mass-produced.

The world’s first sodium-ion EV battery can reportedly be charged to 80% capacity in 15 minutes.

Sodium-ion batteries are another promising alternative to lithium-ion designs — these use a liquid electrolyte, too, but instead of relying on lithium ions to carry a charge between electrodes, the task falls to sodium ions.

The main benefits are cost and cleanliness — sodium is much cheaper and less environmentally taxing to mine than lithium — but sodium-ion batteries could also speed up charging.

In 2021, China’s Contemporary Amperex Technology Co. (CATL) — the world’s biggest EV battery maker — unveiled the first sodium-ion EV battery, which it claims can be charged to 80% capacity in 15 minutes.

(Something that’s worth noting is just how many miles of range 80% or 90% capacity will get you using these next-gen batteries depends on the total size of the batteries and the EV itself — bigger cars are heavier and drain batteries faster. And the real-world charging speeds would also no doubt vary a lot depending on the type of charger.)

Batteries are just one side of the charging equation — we could also speed up the process by focusing on chargers and how they interact with EVs.

Today, the standard protocol for EV charging is for the power delivery to start slowly, get faster, and then slow down again when the battery is about 70% charged. That’s known as the “charging curve,” and it’s the focus of new research at Idaho National Laboratory (INL).

“What [the researchers] are trying to do is to optimize this curve to get more time with higher power,” Gil Tal, a transportation tech researcher at UC Davis, who isn’t involved in INL’s work, told New Scientist.

For a study presented at the fall meeting of the American Chemical Society, the INL team trained a machine learning algorithm to analyze up to 30,000 data points while an EV battery was fast charging, looking for all the ways the process was stressing the battery.

“[We were] trying to understand and rapidly identify failure modes because that allows us to then go in and say … the battery’s starting to fail in this fashion,” explained researcher Eric Dufek.

The team then used that information to develop an optimized charging protocol. When they tested it on real EV batteries, they found they could charge them to up to 90% in 10 minutes without causing damage that would affect the battery’s long-term health.

The INL team’s goal is to be able to add 20 miles of range to an EV every minute.

It’s not clear how large the batteries were or what types of chargers were used during the testing, though, meaning we don’t know how many miles of range the 90% charge equates to.

However, Dufek told New Scientist that the protocol would apply to most EV batteries in use today — manufacturers would just need to tweak it to match their specific battery designs. Implementing it would be as simple as updating the software EVs use to communicate with chargers.

“What makes it really great is that it’s improvement with no cost,” said Tal. “With the existing infrastructure and existing technology, you can get some improvement.”

The INL team plans to continue developing the protocol over the next five years, with the intention of being able to add 20 miles of range to an EV every minute — today’s fastest chargers max out at around 15 miles per minute.

“The goal is to get very, very close to [times] you would see at the gas pump,” Dufek told the Washington Post.

EV batteries that can be topped off as quickly as the tanks in gas- and diesel-powered cars will eliminate one major hurdle to EV adoption —  but we still need better charging infrastructure, more affordable EV options, and simply more EVs in general.

There are people focused on overcoming those challenges, too, though, and support for EVs has seemingly never been higher, with governments, major automakers, and the public all buying in. EVs may have accounted for just under 10% of new car sales in 2021, but that was still four times the market share they had in 2019.

So, all signs suggest we’re heading toward an electric future — the question now is how soon can we reach our destination. 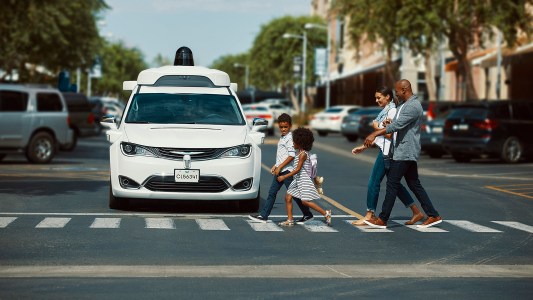 New research from Waymo points the way to overcoming driver fatigue in cars that are almost — but not quite — self-driving.

Cars
On the road to autonomous cars, driver fatigue will be a problem
Subscribe to Freethink for more great stories
Subscription Center
Challenges
Video
Freethink
Subscribe
We focus on solutions: the smartest people, the biggest ideas, and the most ground breaking technology shaping our future.
Subscribe